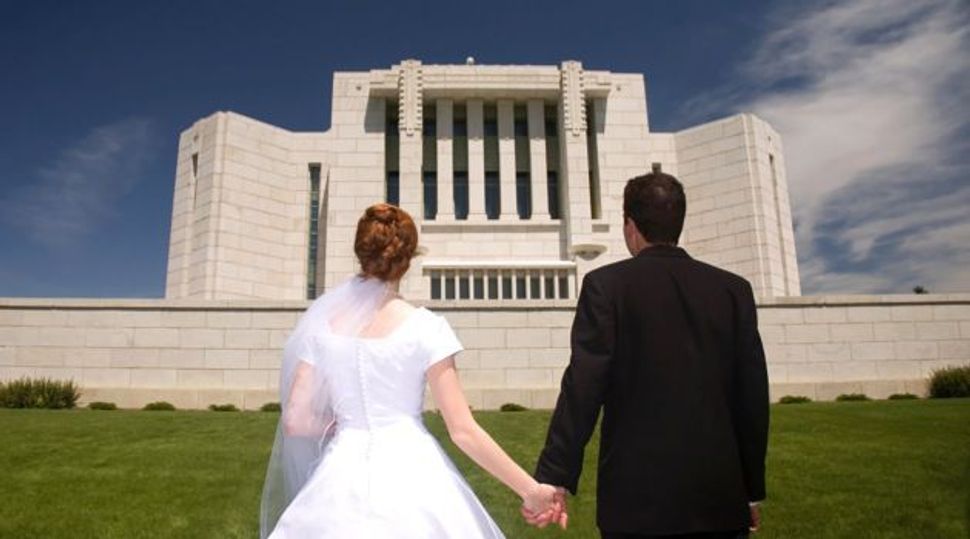 Marriage, Mormon Style: They marry young, while the church still has influence. Image by Getty Images

When it comes to interfaith marriage, is there anything that Jews can learn from Mormons? Most Jewish leaders would not relish this comparison. After all, what does a liberal, cosmopolitan group of immigrant grandchildren have in common with this American-born collection of conservative Christians? Well, more than you might think.

For one thing, they make up a similar percentage of America’s population (about 6 million people), with larger concentrations in a few places — Jews in major metropolitan areas, Mormons in Utah and other Western states. Mormons, on average, do not match Jews in terms of their wealth or education levels, but the former have been gaining and now seem to occupy a disproportionate number of elite positions in government, business and academia.

But one way in which they differ dramatically is that Jews are America’s most intermarrying people and Mormons its least. According to the 2001 American Religious Identification Survey 27% of Jews were married to someone of a different faith, compared with 12% of Mormons.

Some observers would dismiss this fact as a reflection of the religiosity of the members of the Church of Jesus Christ of Latter-day Saints when compared to the religiosity of American Jewry. But a survey I commissioned in July 2010 of almost 2,500 people (including an oversample of members of interfaith couples) found that there was no correlation between childhood religious experience and the likelihood of marrying out.

I did find that the older you are when you marry, the more likely you are to marry out.

When it comes to marriage, the most striking demographic difference between Jews and Mormons is the age at which they get married. The average age of a first marriage for Mormons is, according to my study, 23, and for Jews it’s 27. Because the sample of both groups was relatively small, we tried to confirm these statistics by looking at other studies.

If we look at data taken from the 2006 General Social Survey (the last time researchers asked the question about age at first marriage), Jews married at 25.8 and Mormons at 22.6.

The church elders realize that marriage and family are crucial to involvement in the faith, and so they try as soon as possible to get their members married and settled into a particular community. The church does not want members to experience those “odyssey years” when “emerging adults” tend to drift in and out of relationships and in and out of religious institutions. That is when you start to lose them.

Indeed, it seems that unlike most other faith communities in the United States, the LDS Church’s demands are most intense on members in their early 20s. Men are asked to serve a two-year mission, and women may serve an 18-month one.

As Allison Pond wrote in The Wall Street Journal at the end of 2011: “The most important converts to Mormonism might be the missionaries themselves. Studies indicate that returned missionaries maintain strong levels of religious activity, with more than 80% attending services each week and paying tithes to the church. Returned missionaries also tend to have high educational levels and marriage rates.”

The closest thing that Jews have to the missionary experience is Taglit-Birthright Israel. Both programs take 20-somethings out of their usual environs and give them an intensive communal experience. One lasts for 10 days and serves as a kind of extended Saturday night mixer; the other lasts a year and a half and asks young men and women to fully take ownership of their faith and responsibility for the continuity and expansion of their community.

Jewish institutions, meanwhile, do not seem for the most part to talk about marriage early on. Jewish youth groups certainly serve as a pool for making same-faith friends and even for finding romantic partners. But few Jews in high school ever hear about marriage as a priority.

After the bar or bat mitzvah, most Jewish institutions do not have any kind of formal schooling or other particular religious requirements. Aside from teen youth groups and college Hillels, Jewish leaders mostly seem to be waiting for young Jews simply to return to their doors when they get married sometime in their late 20s. Emerging adulthood, though they may not call it that, is embraced by most Conservative and Reform families, who want their children to have a variety of educational, professional and geographical opportunities, unencumbered by the needs of a mate.

If there is something to be learned from the way the Mormon Church has approached interfaith marriage, it is not just that certain policies, structures and teachings of the church work to encourage endogamy. Interfaith marriage is not unheard of among Mormons. In fact, there are people at the highest levels of church leadership who come from interfaith homes or whose own children are in interfaith marriages.

Over time, though, a significant portion of these marriages becomes same-faith. And it is because of the church’s attitudes toward interfaith couples and nonmembers in general that this is the case. I would describe it as a calm and quiet confidence that there are important truths to be found in the LDS faith, that their community is one that people should want to join. There is a sense that religious views do not necessarily change overnight, but sometimes only after years of marriage or a decade or more of involvement with a community.

Mormons understand that conversion is not something you ask about once and then drop. People change, and they become more receptive to religious messages at different points in their lives. It is not devious or threatening to try to engage nonmembers in such discussions regularly as long as you are not mean-spirited or hectoring.

Jewish leaders have focused so far mostly on the problems they have had convincing young Jews to marry inside the faith. But they have not paid as much attention to what happens after intermarriage. There is an acknowledgement that pushing more conversion would be a good idea. But Jews are so new to this idea that they are not quite sure how to go about it. When they do, they are often timid and deeply concerned about offending non-Jewish spouses.

Or they simply want to make it seem like Judaism is something that is compatible with a spouse’s agnosticism or secularism. This is understandable, but America is a thriving religious marketplace, and if Jews are going to compete, they will need to have more confidence in their message.

Naomi Schaefer Riley is the author of “’Til Faith Do Us Part: How Interfaith Marriage Is Transforming America” (Oxford University Press).