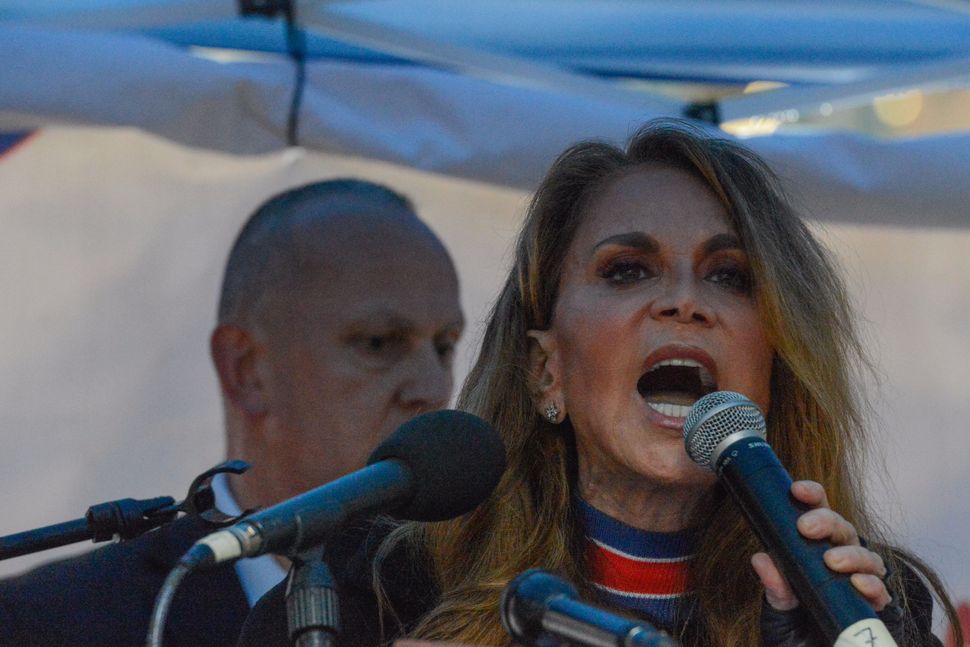 When it comes to Israel, freedom of speech has become its own battleground. We’ve seen plenty of it in New York already in 2013. Progressive groups defended a talk at Brooklyn College by two Boycott, Divestment and Sanctions (BDS) activists in February, and right-wingers rallied around anti-Muslim blogger Pamela Geller this week. The two episodes say a lot about discourse on Israel in the United States.

Geller’s talk at a Great Neck synagogue was cancelled in the face of growing controversy over it. Jewish Voice for Peace (JVP), Jews Say No, and Jews for Racial and Economic Justice (JFREJ), led the Jewish left’s protest against Geller. I asked Rebecca Vilkomerson, JVP’s executive director, about her reaction to the Geller cancellation. She said: “Of course I’m pleased that Geller’s appearance at the Great Neck synagogue was cancelled. But the kind of hate speech we see regularly in New York, coupled with government violations of the rights of the Muslim community, makes it a very unsafe environment for the Muslim community. We need to continue to speak out unequivocally against it. Our community needs … to continue to challenge the systems and practices that enable Islamophobia to flourish.”

But wait, say the critics, JVP is being hypocritical. The group was also a major player in the Brooklyn College controversy and, in that case, JVP was defending the right of two advocates of BDS to speak. They also worked hard to reverse a decision by New York City’s LGBT Community Center to prevent Sarah Schulman, a supporter of BDS and a member of JVP’s advisory board, from speaking at the Center, and that decision was ultimately reversed. Why, the critics wonder, is it ok for anti-Israel activists to speak at a university or community center but it’s not acceptable for someone who is anti-Islam to speak at a synagogue?

Pamela Geller preaches venomous hatred of Muslims. She is one of the leading voices promoting the idea of “creeping Sharia” in the United States. Claiming that Islam, as a religion, is dedicated to eradicating Jews and eventually turning all others into Muslims by whatever means necessary is the very definition of hate speech. One might oppose BDS, consider it unfairly anti-Israel, or even consider it an unjust and threatening movement. But it is not hate speech, it is a political point of view.

The boundaries aren’t really all that fuzzy. Heated and passionate political debates, if conducted in a civilized manner, need to be encouraged, and that means airing a wide spectrum of views. But that spectrum loses nothing by not giving hate speech a platform. Abe Foxman of the Anti-Defamation League, who expressed sympathy for anti-Muslim protesters in the Park51 controversy, considers Geller a hatemonger, and has said so publicly, much to Geller’s chagrin.

Pro-BDS speakers will surely produce a long list of Israeli crimes and an analysis of Israel as an oppressive occupier. One may well disagree with that view, even be offended by it, but that is politics, not hate speech. Hate speech is communication that vilifies a person or a group based on discrimination against that person or group. Governments and political systems, however, can and must be criticized under any reasonable definition of free speech in an open society.

There is no evidence that the speakers at Brooklyn College and the LGBT Community Center, Judith Butler, Omar Barghouti and Sarah Schulman, ever engaged in hate speech. Geller does it as a matter of course. I’m sure there are BDS activists who have done such things, as there are in any reasonably large group of activists. But it is far from typical, as you can see from the response here of a contingent of leading BDS activists to anti-Semitism from a prominent BDS activist.

Geller’s level of anti-Islam speech creates plenty of consternation even among staunch supporters of Israel’s current policies. As The Forward reported in September, in an article about the anti-Muslim ads Geller’s organization was placing in mass transit systems in several major cities: “Jewish advocates are particularly disturbed by the ads because they combine anti-Islamic propaganda and pro-Israel discourse as if supporting Israel and rejecting Islam were two sides of the same coin.”

So what was JVP’s guiding principle in these different cases? It was not, as the Forward article on the Geller controversy implied, selective application of an ethical principle. On the contrary, the principles used were entirely consistent.

JVP supports open dialogue. They therefore defend Barghouti, Butler and Schulman. JVP opposes hate speech, so they protested and called on the synagogue to cancel Geller. Those are not only compatible principles, they are necessary compliments of each other. If a sober analyst, one who firmly opposes BDS, examines the words of Butler, Schulman and Barghouti, they are likely to find a great deal that upsets them deeply. But they will not find hate speech. No one can seriously come to the same conclusion about Geller’s always outrageous and often irrational words.

It is certainly true that what is needed is more dialogue, not less. People in all communities, but especially Jewish and Arab ones that have a deeper connection to the Israel-Palestine conflict, need to be exposed to all points of view, and to get those views from the people who espouse them, not their opponents. But there is no reason that such a principle of open debate must force a platform for hate speech.

In order to have that open exchange, we must strive to differentiate between radical political positions and bigotry. One can be anti-Zionist without being a bigot. One can hold that Israel has the right to annex the West Bank without being a bigot as well (though it’s hard to see a case for denying rights to millions of Palestinians for generations now without the presence of a prejudice which denies their entitlement to such rights). We should be hearing from all of those people. But that doesn’t mean there must be a platform for anti-Semitic speakers, such as Gilad Atzmon (yep, a Jewish Israeli), or David Duke. Nor must there be one for anti-Arab or anti-Muslim bigots like Geller.

The right to free speech under the law is a freedom from government interference with speech. Still, we also hold it deeply as a value outside of the law. Yet free speech is limited in many contexts. One can lose their job due to speech, and can be thrown out of all sorts of venues for inappropriate or offensive speech. It doesn’t have to rise to the level of crying fire in a crowded movie house.

Even hate speech must, barring an incitement to violence, be free from government intervention. But that doesn’t mean we have to tolerate it in our communities. Instead, we should employ the complimentary principles of defending a broad and open debate, even when some views disturb us deeply, and equally strong opposition to hate speech. That combination leads to progress.

Mitchell Plitnick is a freelance journalist and blogger at http://mitchellplitnick.com, the former Director of B’Tselem’s U.S. Office and former Co-Director of Jewish Voice for Peace.