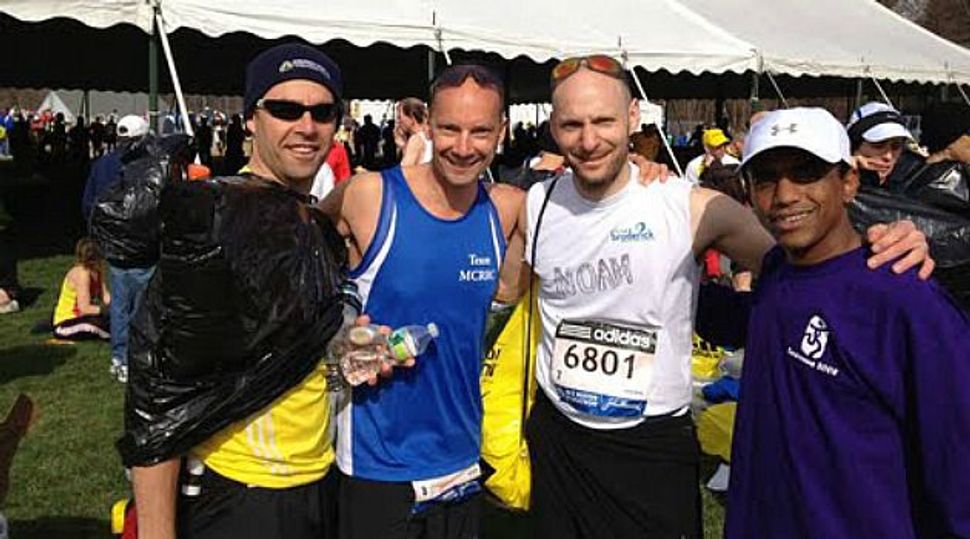 Lessons of Boston: Noam Neusner, second from right, prepares to run in the Boston Marathon.

On April 15, I was one of the 27,000 runners of the Boston Marathon, and luckily was several blocks away from the tragedy on Boylston Street. Being a runner gives me some insight into the moral depth of those who finished the race and then sprinted back into the carnage.

At the end of a marathon, the runner’s body is depleted of every remaining ounce of strength. The body has begun to extract energy by tapping deep fat stores, causing searing pain. The liver has gone into a semi-shock: It releases enzymes that remain in the body for a few weeks. The legs are threadbare, the lungs sear and the heart is pounding dangerously. What remains, for most runners, is mere willpower, and not much of it.

Despite all that, several of the finishers sprinted into danger and administered aid to those injured and maimed by the bombs.

What do we make of this? First, courage and heroism are moral qualities. We are hard-wired to flee from danger, not run to it. What we saw that day, and see every day in every community where crisis occurs, is the triumph of human goodness. To preserve life, even at great threat to ourselves – that is a learned response and a principled choice. That so many people share it is a testament to the goodness of the world, despite the evil that lurks within it.

Second, when something is important enough, we can overcome pain. We set limits every day on what we can do and what we can accomplish. But when life calls us to reach beyond the limits, we manage. That is true not just for runners finishing a marathon, but also those living their final days and willing themselves to see one more grandchild born, one more final reunion, before they pass.

There are now people in hospitals in Boston who are waking up to a life without legs. They will, I expect, compete in future years’ marathons in the wheelchair division even though they would never have considered competing as runners. This, too, is a uniquely human response — when something is important to us, we summon energy beyond what we once thought possible. Limits are often arbitrary; only love decides what we can do. If we love something enough, we will persevere.

Third, fate is an ugly and unjust way to construct the universe. Those killed and maimed were not chosen and they were not targeted. They just were present. There was no skill in avoiding the explosions and there was no moral choice involved. A world constructed around the vicissitudes of fate and fortune is fundamentally unjust — it gives no room for human agency and human choice.

The great moral systems of the world — Judaism among them — bring order out of the chaos of fate and fortune. In the days to come, let us not appeal to nor abandon our lives to luck and the odds. Let us make those choices that preserve the principle that we make our lives and our lives are not made for us. We may not succeed every moment of every day, but if we fail to try, there will be no rationale for the heroism we saw on Boylston Street.

All of which brings me to think about what happens next.

As someone who was present at Ground Zero on September 11, 2001 and now on Boylston Street, I have been too close to horrific acts of terror on United States soil. These two events (and others like them in London, Madrid, Tel Aviv, Jerusalem, Bali, Tokyo and so on) are relatively rare, and so it is tempting to consider them “one-off” occurences. They may be rare, but we live with the consequences every day.

The people who organized and executed these bombings did so to constrict our lives further. They aim to take away our freedom of movement. They want to take away our trust in strangers. Yesterday, they took away the joy of a crowning American civic celebration of sport and determination.

They are mangling our public spaces with the inevitable security apparatus that will follow. They targeted a high-profile televised event precisely to mark the witnesses along with the injured. I saw a photo of a man with exposed leg bones, his feet and flesh blown off. We are all injured, as witnesses.

It is up to us what happens next. We saw in Boston what we always knew. We are capable of great moral choices in moments of high crisis.

And we are not defenseless. We are not subject to fate and fortune. We sanctify life when we run into danger. And in the face of terror, we embrace life when we vigorously pursue, prosecute and attack those who have attacked us.

War is being waged on us and if we don’t fight for our public spaces and civic freedoms and celebrations, we are going to lose them. So if this is a war, let it be a war, and let us not fight by restricting ourselves. Let us fight by doing what it takes to achieve victory.