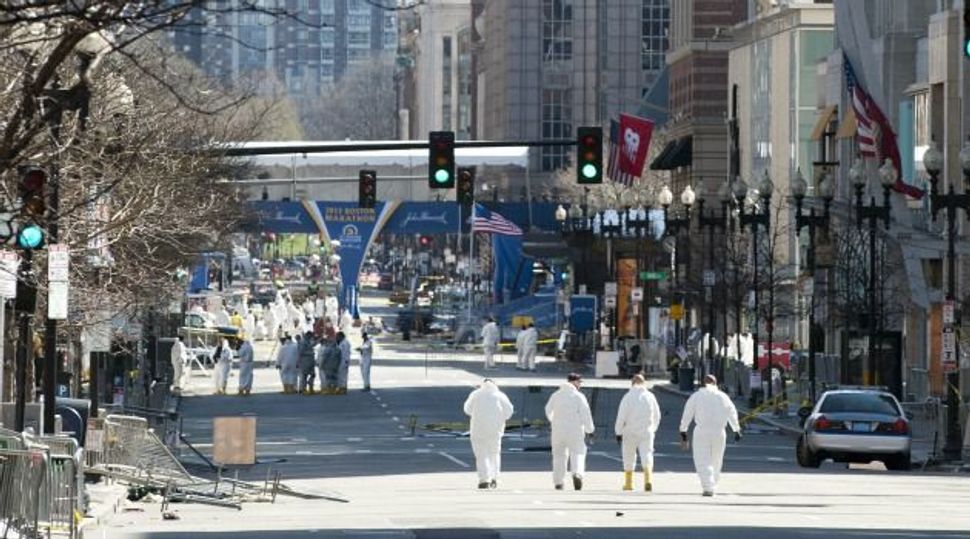 Moments after the bombs exploded on Monday, April 15 along the Boston Marathon route, it was already clear what the attack’s main goal was. It was a deliberate assault on America’s public order and national self-confidence. That’s the purpose of all terrorist actions, whoever their perpetrators. They’re intended to terrorize, to unsettle.

That’s why President Obama declared the next morning that beyond the certainty that the crime would be solved, “we also know this: The American people refuse to be terrorized.”

Less obvious was the attack’s secondary impact. Intentionally or not, the bombing opened a new front in America’s ongoing culture wars. Within minutes of the blasts, the Twittersphere came alive with finger-pointing and outraged denials. The right flatly declared it to be jihadi terrorism. The left just as insistently named other possible culprits on the domestic far-right. Each side’s assumptions left the other righteously appalled.

Liberals noted the symbolic timing of the attack, coinciding with Tax Day, Patriot Day and the approaching anniversary of the deadly 1995 Oklahoma City bombing, all red meat to far-right extremists. Conservatives simply asserted what was obvious — to them, anyway — given the past decade’s headlines, the upheavals in the Muslim world and repeated attacks on American targets.

Next came indignation. The left accused the right of bigotry for rushing to blame Muslims before any facts were known. The right professed shock at the left’s politically correct denial of the obvious and decried its tarring of patriots and anti-tax protesters — that is, the Republican base.

First out of the box was the New York Post, which reported an hour after the explosions that Boston police were holding a Saudi suspect. Boston police immediately disavowed the report. It later emerged that a Saudi national had been questioned but wasn’t a suspect. By then, however, the Post version had gone viral: More than 3,000 Facebook posts, and 10,000 tweets. Some right-wing websites were hinting at a police “cover-up.”

Some of the indignation reached almost comical proportions. MSNBC host Rachel Maddow on Monday evening listed past terrorism cases that had been cracked by the federal Bureau of Alcohol, Tobacco and Firearms, went on to lament that the bureau hasn’t had a director for six years because of Senate obstruction, hinting that this might hamper the Boston investigation — and then promptly said she didn’t want to politicize the crisis.

Bill O’Reilly attacked Obama for calling the attack a “tragedy” rather than “terrorism” at his Monday press conference, even though investigators still weren’t sure what happened, much less how to classify it. By Tuesday morning, commentators from Obama on down were calling it “terrorism.” Also, a “tragedy.”

Amid the fireworks came endless chatter about Americans coming together in crisis. In a way, we did: First responders and bystanders leapt forward in extraordinary acts of heroism, trauma surgeons performed miracles, Bostonians donated blood, ordinary Americans everywhere watched and prayed.

In the moment, that is, we came together and refused to be terrorized. It was afterward, as we grappled with what happened and why, that we came apart.

The debate isn’t new. It’s been percolating for decades. It resurfaces whenever an attack occurs without an obvious perpetrator, and again when a new report attempts to analyze the threats.

Conservatives erupted in April 2009 over a Homeland Security report on right-wing extremism, begun under the Bush administration, that cited rising threats following the economic downturn and election of a black president. Under pressure, Homeland Security secretary Janet Napolitano finally withdrew the report and reassigned all but one of her domestic terrorism investigators.

In July 2012, House Republicans hammered Napolitano over a training program that examined right-wing threats alongside Muslim extremism. One congressman, Paul Broun of Georgia, complained that security officers were being taught to look for “gun-owner, Christian-conservative, pro-life” types. “That’s me,” Broun said. “How are you going to prevent me from being identified as a terrorist?”

In 2010, liberals protested a House committee hearing on extremism among American Muslims, saying it unfairly tarred an entire faith. Dozens of federal, state and local law enforcement agencies have been accused since 2001 of profiling Muslims and spying on mosques. Publicly, police said they weren’t spying. Privately, they said that’s how they catch terrorists.

The numbers suggest that both sides are correct. Available statistics are wildly conflicting, depending on who’s counting and what’s included, but it appears that since 2001, jihadist-inspired American Muslim terrorists have carried out between five and 10 attacks, killing either 17 or 33 people. (The higher numbers include killers who spouted vague Islamist ideology, notably the so-called Beltway Sniper who killed 11 people in 2002.)

In all, between 150 and 172 jihadist terror suspects have been arrested. Significantly, about 45 other attacks were foiled in that period. Some interdictions resulted from intelligence work, others from Muslim community cooperation. That spotlights a dilemma in domestic espionage: It saves some lives, but threatens others by undermining community trust.

In the same period, right-wing domestic terrorists were responsible for at least 16 lethal attacks resulting in 40 deaths. They include white supremacist, anti-government and anti-abortion extremists. Non-lethal incidents include at least nine bomb and arson attacks on abortion clinics.

A dozen others, all domestic right-wingers, were arrested for collecting chemical, biological or nuclear weaponry. In all some 300 far-right terrorists and plotters were arrested. Only a handful of left-wing terror acts occurred, mainly environmental or animal-rights, none lethal.

America has two distinct terrorism problems. Both are serious, but neither poses a strategic, existential threat. Our greatest danger is within ourselves: our inability to listen to each other.