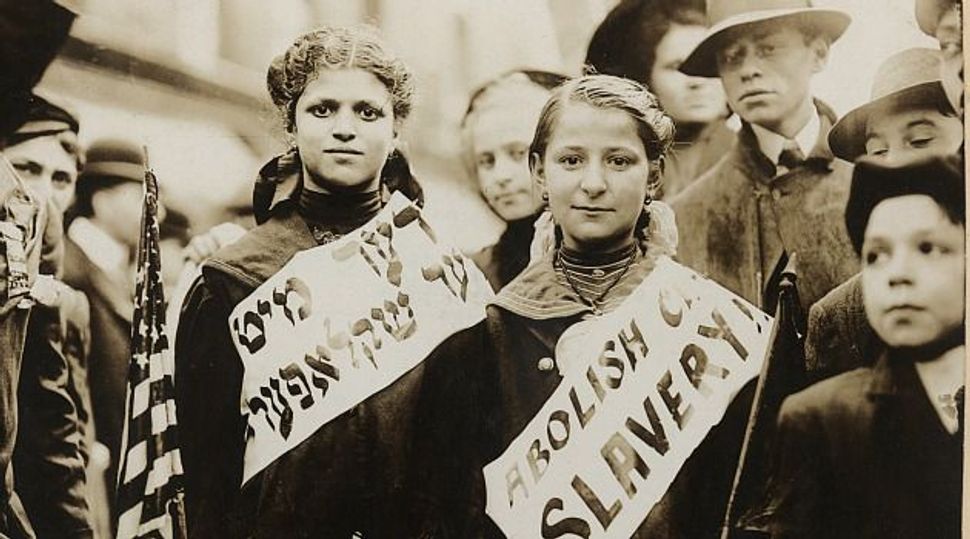 Three years before he would go on to become the founding editor of the Yiddish Forward, Abraham Cahan was already deeply worried about the prostitution and, indeed, enslavement of Jewish immigrant women on New York City’s Lower East Side and the police corruption that enabled it to flourish.

“The most disgusting area of the city at the time was Allen Street, which was precisely in the midst of the Jewish neighborhood,” Cahan wrote in his memoirs in 1894. “At night in the disorderly houses the windows were lit with red lamps — the source of the expression ‘red light district’. Allen Street was the center of the brothel district and owners of these disorderly houses were known as ‘cadets’ or ‘alphonses,’ as one would call the revolting creatures who live off the disrepute of the women they enslave and whom they dominate with unlimited power. It was literally dangerous to walk down those streets.”

So little had changed by the turn of the century that Cahan broadened his admonition to Forward readers: “It is better to stay away from Allen, Chrystie and Forsyth Streets, if you go walking with your wife, daughter, or fiancee. There is an official flesh trade in the Jewish quarter. In the window you can see human flesh instead of shoes.”

The poverty, dislocation and desperation that fueled the Lower East Side sex trade have largely disappeared from American Jewish life — and from those streets, now home to hip, expensive real estate and a cultural vibe that only selectively draws from the immigrant past, more pushcarts than prostitution. But some Jewish activists and organizations are arguing that those past experiences should inform today’s advocacy, and are mounting conferences and campaigns to eradicate sex trafficking as a Jewish issue even if few Jews may be involved. These efforts should be applauded and supported.

“I am shocked at how similar the stories of Jewish immigrants on the Lower East Side are to my clients’ stories today,” said Lori L. Cohen, senior staff attorney with Sanctuary for Families, a not-for-profit aiding sex trafficking victims. “My clients speak Spanish. Back then it was Yiddish. Aside from the differences in language, the stories are identical.”

Advocates say that sex trafficking is modern-day slavery, an analogy that could seem overly dramatic or even historically dubious. But the law defines a trafficking victim as someone engaged in commercial sex by force, fraud or coercion, or as a minor. As President Obama said in a speech last September at the Clinton Global Initiative: “Now, I do not use that word, ‘slavery’ lightly. It evokes obviously one of the most painful chapters in our nation’s history. But around the world there’s no denying the awful reality…. When a little girl is sold by her impoverished family — girls my daughters’ age — runs away from home, or is lured by the false promises of a better life and then imprisoned in a brothel and tortured if she resists — that’s slavery. It is barbaric, and it is evil, and it has no place in a civilized world.”

But it is, experts say, ubiquitious, lucrative and far more pervasive than most of us realize. The United States government estimates that 27 million people are victims of slavery worldwide; according to the International Labor Organization, 4.5 million were enslaved through “sexual exploitation” — 98% of whom were women and girls. The International Organization for Migration estimates that 500,000 women are trafficked to prostitution each year.

Israel is not immune. The advocacy organization Atzum says that in the past decade, about 25,000 women, nearly all from the Former Soviet Union, were smuggled into Israel over the Egyptian border to be brutalized as sex slaves. Neither is America immune. The Bureau of Justice Statistics found that between 2008 and 2010, 83% of victims of confirmed sex trafficking incidents were American citizens (as opposed to labor trafficking victims, who are mostly undocumented workers).

In a report delivered to Obama on April 9, the President’s Advisory Council on Faith-based and Neighborhood Partnerships encouraged the federal government to elevate and consolidate its internal efforts to counter trafficking. But the council’s 16 members — including two Jewish leaders — acknowledged that faith communities have an essential role in this effort. As Susan K. Stern, the council chair, said in an interview, “The code of silence needs to be broken.”

While organizations like the American Jewish World Service have for years funded efforts overseas to eradicate sex trafficking, only recently have domestically oriented agencies taken up the challenge to counter the scourge under foot. UJA-Federation of New York, for instance, is convening a daylong meeting on sex trafficking April 22 to discuss the Jewish community’s response and responsibility.

Stern is adamant that there is much that can be done on the local level. Those who work in synagogues and in Jewish schools should be trained to spot signs of trafficking. Social service agencies should be informed about the services available for victims, from law enforcement, legal aid to mental health. “When people are in trouble, they go to their clergy, so the clergy need to know what services are available,” Stern said. But the advocacy can’t stop there: “All of us have huge networks. We have the moral authority to say it’s unconscionable that this exists and we must do something about it.”

Cohen, one of the organizers of the federation conference, said that history is a guide here. “Jews were victims, perpetrators, buyers and at the forefront of finding solutions,” she noted. The National Council of Jewish Women used to have a presence on Ellis Island to intercept single Jewish women who were unknowingly sent to these shores to be sex workers. “It’s our issue, not only because we have a moral obligation, but because we had our own experiences,” Cohen said. “We have tried to remove that experience from our historical memory, but it’s important to understanding why this persists today.”