The View of Boston, From Israel 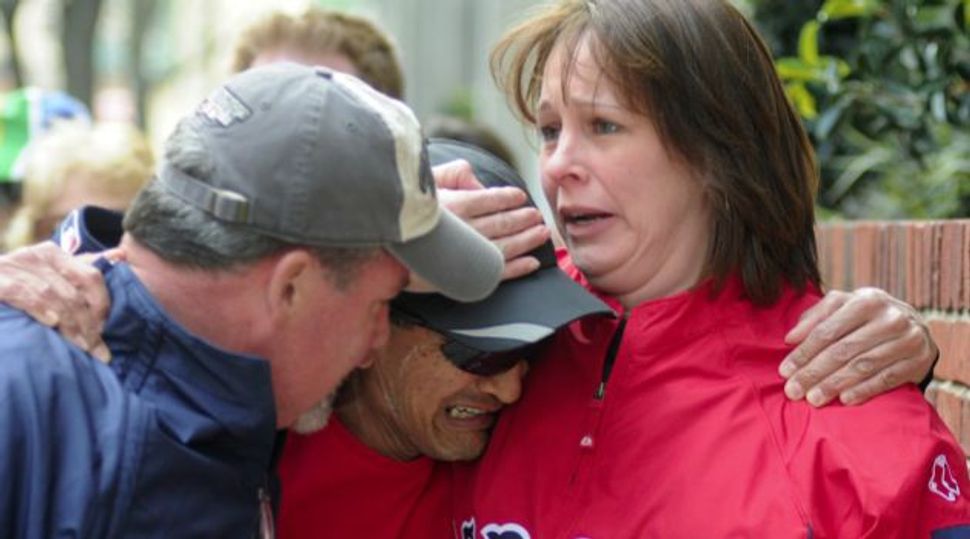 Familiar Scenes: The aftermath of terror is something Israelis know well. Image by Getty Images

Friends from places faraway and near wrote to inquire of my safety in the wake of the Boston Marathon bombing. It gave me an odd sort of pleasure to inform them that I was, when they wrote, in Jerusalem, where terrorism is, at least for the time being, an issue for the authorities rather than the citizenry to worry about. The pleasure was, however, short-lived: The Boston bombing was too awful for me to linger in satisfaction.

Terrorism at home, an eight minute drive from where I live, three short blocks from my brother’s and sister-in-law’s home. My old friend Danny Mann writes from Washington, “The first thing I do every morning is to check the Post to see if anyone blew up the world the night before. If not, I proceed to breakfast. But the front page can be gruesome nevertheless, as it surely was today. I hope that you, your family, and your friends were not affected physically by the bombs.”

Yes, it could have been worse, much worse. Timothy McVeigh’s truck bombing of the Murrah Federal Building in Oklahoma City took 168 lives. But “it could have been worse” is never a consolation. I picked up Yediot Achronot the day after the Marathon bombing and there it was, more than half the cover page devoted to a photograph of the explosion over a headline reading “Terror in Boston.” More photos and a map of the area on pages two, three and four. The bombing resonated in Jerusalem in a very special way, as one might expect. And also in ways one might not expect.

Several years back, the emergency room people at the Massachusetts General Hospital decided that they were not well-prepared for a serious episode, whether or not spawned by terrorism. They invited emergency room folks from Israel who spent a week in Boston training the local staff.

There’s more: The head of the Beth Israel-Deaconess, also, like Mass General, a Harvard teaching hospital, is Dr. Kevin Tabb — a graduate of the Hebrew University-Hadassah Medical School, where he trained and practiced medicine; he is a commissioned officer in the Israel Defense Forces and served as a combat physician prior to coming to America.

Surely there are few, if any, cities in America with richer hospital resources. And there are six level one trauma hospitals within three miles of the explosions. Those who refer to Boston as “the hospital capitol of America” know whereof they speak.

They were expecting rain in Boston the day after the bombing, which, it was feared, would wash away the evidence being painstakingly collected. But not the memories of what happened. There were some surgeons running in the Marathon; when they explosions took place, they kept on running, all the way to the nearest hospital, where they knew they’d be needed. plus a large and well-staffed medical tent at the Marathon finish live to help runners in distress. In the meantime, residents of buildings in the area of the explosions were for a time not permitted, even with escorts, to access their apartments, hence were cut off from access to their medications.

As to lessons to be derived from the outrageous tragedy, one lesson was, alas, obvious from the beginning: America is not immune. We learned that on 9/11, and now again. As diligent as are our security people, the country is simply too vast, the opportunities for evil too numerous, to cast an airtight protective net over the land.

This time around, we’re told, there was no telltale chatter that might have forewarned the security forces. (Hence the apparent belief that the perpetrator acted alone.) We do, it seems, listen for such things, privacy be damned. And until now, we haven’t paid attention to the idle backpack abandoned on the street. That, too, will now — one hopes — change.

And what, in heaven’s name, do we tell our children?

Here, too, there are lessons to be learned from the Israeli experience. Children in groups in Israel move about with armed chaperones. (The NRA must know that, and will for sure trumpet it. They should also know that there’s now a serious move in Israel to restrict the weapons allocated to private security personnel.) They do not move about furtively or with fear furrowed on their brows. They are aware of the risks, but not inhibited by them — surely not these days, when incidents of terrorism have all but disappeared (except for nearly daily incidents of settler terrorism against neighboring Palestinians and some rock-throwing by Palestinians).

Much is made — too much, in my view — of the values allegedly shared by Israel and the United States. Now there is this new thing to be shared. Everyone in Israel is aware of it and identifies with it. But then, before we are carried away by the symmetry, there’s this: The Occupation. That is more than a wrinkle in the symmetry; it’s a rupture, and until it is repaired, the existential conditions of the two nations will remain fundamentally different.

The View of Boston, From Israel