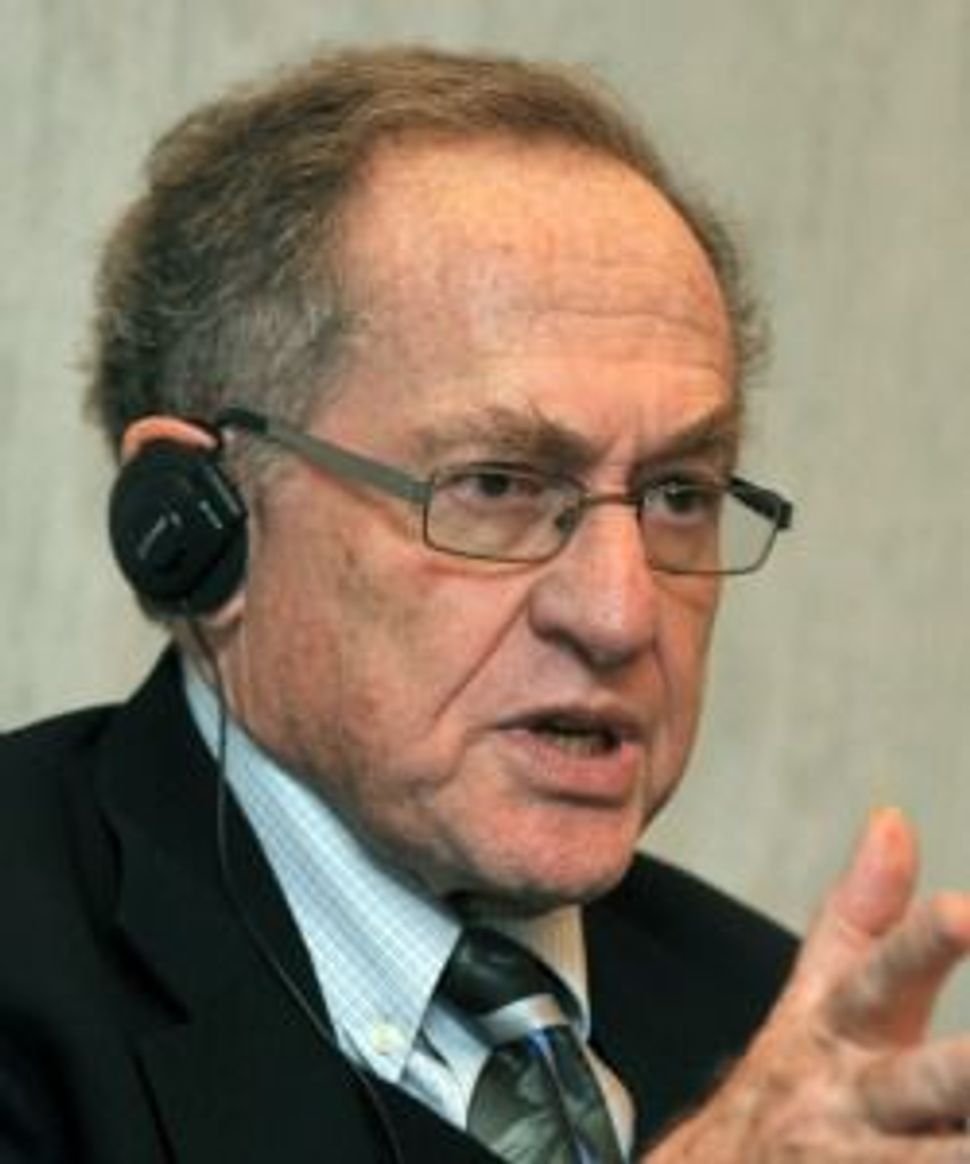 Appearing at a day-long seminar on Israeli security, the celebrity scholar was repeatedly heckled and booed as he described his contacts with Palestinian leaders and urged civility in public discourse. Returning fire, Dershowitz told the audience they were “part of the problem, not part of the solution” and “you don’t speak for anybody but yourselves. Fortunately, nobody is listening to you.”

The occasion was the second annual Jerusalem Post Conference, an odd combination of high-level exchanges on security policy and raucous, far-right pep rally. The title was “Fighting for the Zionist Dream,” though it might just as easily have been named “Fighting Over the Zionist Dream.” Most of the day was devoted to thoughtful presentations by senior Israeli defense leaders, analyzing the complexities of Iran and Syria policy and discussing ways of reigniting peace talks with the Palestinians. Speakers included a former prime minister, a ranking Likud cabinet minister, a former army chief of staff, a former Mossad director, a former chief of military intelligence and others, including several Jerusalem Post journalists.

The paying audience, close to 1,000 New Yorkers, received most of the speakers politely, applauding only occasionally when someone saluted Israel’s soldiers or criticized Iran and booing lustily when they disagreed. The most enthusiastic reception was reserved for Post columnist Caroline Glick, a passionate opponent of Israeli-Palestinian compromise known for her slashing attacks on liberals.

The Dershowitz flap was essentially a replay in high-definition of a ruckus that punctuated the first Post conference, held a year ago in the same Marriott Marquis ballroom with many of the same speakers.

Like last year, the conference was opened by former prime minister Ehud Olmert, who reviewed Israel’s various challenges, ending with the Israeli-Palestinian issue. Like last year, his defense of his far-reaching peace talks with Palestinian leader Mahmoud Abbas was marred by repeated audience heckling. Unlike last year, the disruption was not a series of catcalls but a nearly continuous chorus of boos from throughout the hall, occasionally all but drowning him out.

And unlike last year, when Olmert appeared rattled by the hecklers, this year he seemed to relish the response and even baited the audience by repeatedly proclaiming the urgency of reaching peace with the Palestinians, letting the boos grow louder. At moments he seemed like a backwards version of an old-time preacher drawing “amens,” except that his congregation was shouting at him, not with him.

Like last year, Olmert was followed by a string of speakers whose scholarly presentations offered few opportunities for audience reaction. Like last year, columnist Glick took the stage in late morning and delivered a barn-burner that had the audience cheering and booing with her on cue. Unlike last year, when her target was President Obama, this year she directed her fire against American Jewish institutions that give platforms to critics of Israel, or invite critics but then change their minds, or fail to attack Israel’s critics with sufficient vigor. Among her long list of targets was a Yeshiva University law journal that honored former president Jimmy Carter for peace-making. She said he had “called Israel an apartheid state” (in fact he warned in a book that it might become one) and “that’s why they honored him.”

“Part of the reason” why liberals are opening their doors to people who “hate Israel,” she said, “has to do with something that happened around the Yom Kippur War, when the left abandoned Israel. Part of it is because Russia broke off ties with Israel, and if you want to be part of a movement, part of the left, or what the left is called in America, the liberal movement, it’s difficult to be pro-Israel.”

When she was done she received the day’s only standing ovation.

Last year, Dershowitz took the stage after Glick and began by begging the crowd not to “ever boo a president of the United States” when “speaking on behalf of the state of Israel,” which was duly received with scattered boos. The rest of his speech, an attack on Israel’s enemies, was well received.

This year Dershowitz didn’t have his own speaking slot, but merely a seat on an afternoon panel. The topic was the feasibility of Palestinian statehood, which was endorsed by all the panelists except Glick, who called it “suicide.” When Dershowitz’s turn came, he began by scolding the audience for its treatment of Olmert: “I don’t think complex issues can be resolved by booing a former prime minister of Israel.” He went on to praise Israel’s contributions to the world and then offered his own version of road map to renew peace talks, involving a settlement freeze in those areas that “everyone agrees” will be part of a Palestinian state. He asked other panelists to respond.

In response, former Netanyahu national security adviser Uzi Arad said that even a limited settlement freeze would be a “unilateral concession,” which would “require that they give up something,” such as a commitment not to bring complaints to international forums. Dershowitz replied that he had suggested that directly to Abbas, who had promised to “give it serious consideration consideration.” This drew derisive laughter from the audience.

Dershowitz then turned to the audience: “It’s so easy to laugh. The audience here today is not helpful in solving serious and complex issues.” The crowd responded with loud, extended booing. Dershowitz, raising his voice, said, “You’re proving my point. You’re part of the problem, not part of the solution.”

Dershowitz: “I don’t want to talk to people who boo the prime minister of Israel.”

Glick: “I want to know how somebody who’s made his career out of defending free speech could be so disrespectful.”

Dershowitz: “I defend my right to say what I think of you, which is not much.”

Glick then addressed the history of peace talks and past Israeli-Palestinian agreements, which she said were “all a lie.”

The thread was then taken up by the other panelists, including Arad, former military intelligence chief Amos Yadlin and minister for intelligence and security affairs Yuval Steinitz. All three agreed that peace negotiations with the Palestinians were difficult but necessary.

After Steinitz finished, Glick said she felt “like I have to say something. Apparently I’m in a minority view on this panel. It’s not just about security. If the cradle of Jewish civilization in Judea and Samaria belongs to somebody else, who cares what our security needs are? We’re stealing somebody’s land.” Conceding that any part of historic Palestine was negotiable, she said, amounted to “suicide.”

Dershowitz: “Let’s consider the implications of Ms. Glick’s statement. It sounds to me exactly like the arguments of radical Muslims.” This got the audience booing again. He continued that “the two groups—the Muslims who say one-state solution and the Jews who say one-state solution—are leading us to disaster.” As the booing continued, he concluded: “You don’t speak for anybody but yourselves. Fortunately, nobody is listening to you.”