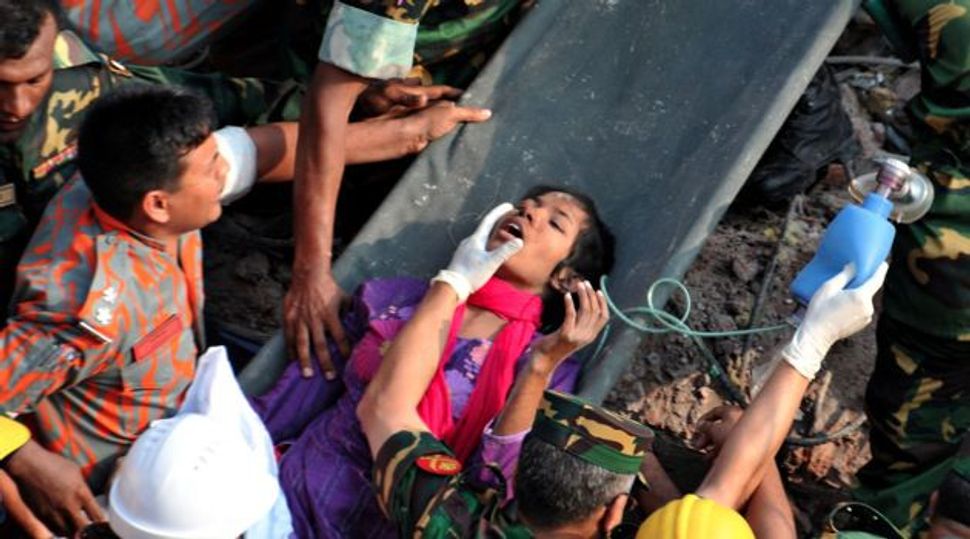 Rare Survivor: On May 10, Bangladeshi rescuers retrieved garment worker Reshma from the rubble, 17 days after an eight-storey building collapsed. Image by Getty Images

On April 24, just outside of Bangladesh’s capital city, one of the worst industrial disasters in history killed over one thousand workers and injured scores more in the dubious service of making cheap clothing for consumers like you and me.

Around the same time, about 8,000 miles away in Brooklyn, my wife and I were cooing over the very cute dress that we had bought for our 9-month-old daughter from a well-known clothing retailer for $5. The lifespan of this little dress would not be more than a few months at best, but we loved it.

Then, after a moment of reflection, I suggested we look at the label. Like many low cost and relatively low-quality clothing items on the market today, we were disconcerted to find it was made in Bangladesh.

UPDATE: Bangladeshi salvage workers neared the end of their search for victims of the collapse of a factory building, scouring the basement of the complex that crumbled in on itself killing 1,127 people.–Reuters

Over one hundred years ago in New York City, where I live, I can imagine other consumers of women’s blouses having a similar reaction when 146 mostly immigrant Jewish and Italian garment workers in the Triangle Shirtwaist Company met a similar fate when the building in which their factory was situated caught fire. In the United States, the Triangle fire was a watershed moment.

Garment workers were galvanized to organize labor unions against the often violent opposition of employers; the government instituted a range of regulatory protections to monitor health and safety in factories; insurance companies required factory owners to clean up their act in order to be issued insurance policies; and consumers were made aware of the sweatshop like conditions in which their clothing was made. Although the Triangle fire is today remembered as a unique disaster that compelled change, in fact it was, like in Bangladesh, only the worst of a number of deadly fires that cursed New York City’s garment industry for years.

The question is, will the deaths and injuries in Bangladesh mark a sea change in the way that work and labor standards in that country and elsewhere are treated. The sad answer is probably not, because unlike the simpler days of the Triangle fire, today’s system of global production and consumption is far more complex and diffuse.

But if there is to be any progress, the solution lies not just in the hands of consumers and companies, but in a range of actors including industry, government, unions, and consumers.

First, we consumers must break our addiction to cheap clothing and wardrobes that get tossed away as easily as fast food containers. The $5 shirt that we buy from any number of low-cost, high turnover retailers doesn’t sew itself. It demands low cost labor working in often high-risk environments.

If we consumers want our clothing and other consumables to be made in more humane conditions, we need to be willing to pay for them and to change the way we think about our wardrobes and the frequency with which we change them. We can’t do this by ourselves. The corporations that enable our addiction need to be incentivized by their customers to do things differently.

Second, to do things differently industry needs to be held legally and economically accountable not just for its direct employees, but also its indirect employees like those who died in Bangladesh working for contractors. It is true that many retailers and buyers have tried to monitor and influence labor standards in their global supply chains when governments fail to do so, as they often do.

But buyers are first and foremost for-profit entities responsible to their shareholders. They are experts in marketing, logistics, and distribution — not labor standards enforcement, and not moral reasoning. While managers have hearts and minds, corporations respond to economic incentives from consumers and regulators who can punish and reward.

Third, domestic governments like Bangladesh must be held accountable for their lack of action. Governments, like corporations, also respond to incentives, and Bangladesh is no exception. Whenever the United States government threatens to impose any form of trade sanction, the Bangladesh government screams murder, and the U.S. and other governments rarely if ever take action.

Finally, workers — not just in Bangladesh but globally — need to take action not just against the retailers, but against their governments. When the Bangladesh government strikes back, which it will, the government needs to be punished by the global community.

A global economy needs global and domestic institutions to accomplish many of these things. Labor standards must start to become mainstreamed into the global trading regime, including in the World Trade Organization, just as they are now included in U.S. trade agreements. If a government fails to respect internationally recognized labor standards, it should be punished with trade sanctions.

Corporations should be held accountable under domestic civil law for their negligence in preventing harm and violating the rights of workers in their global supply chain, even when not direct employees. Transparency laws should require good faith efforts to provide cost breakdowns of the garments and other goods that we buy, including the wages received by workers in the supply chain, from workers at the bottom to CEOs at the top.

If this disaster will lead to real change, consumer pressure and corporate action will not be enough. My wife and I choosing to boycott goods from Bangladesh, for example, is most certainly not the answer. What is needed is a broad based effort by both public and private actors to make right a fundamental wrong in today’s global economy.

Kevin Kolben is an associate professor at Rutgers Business School.