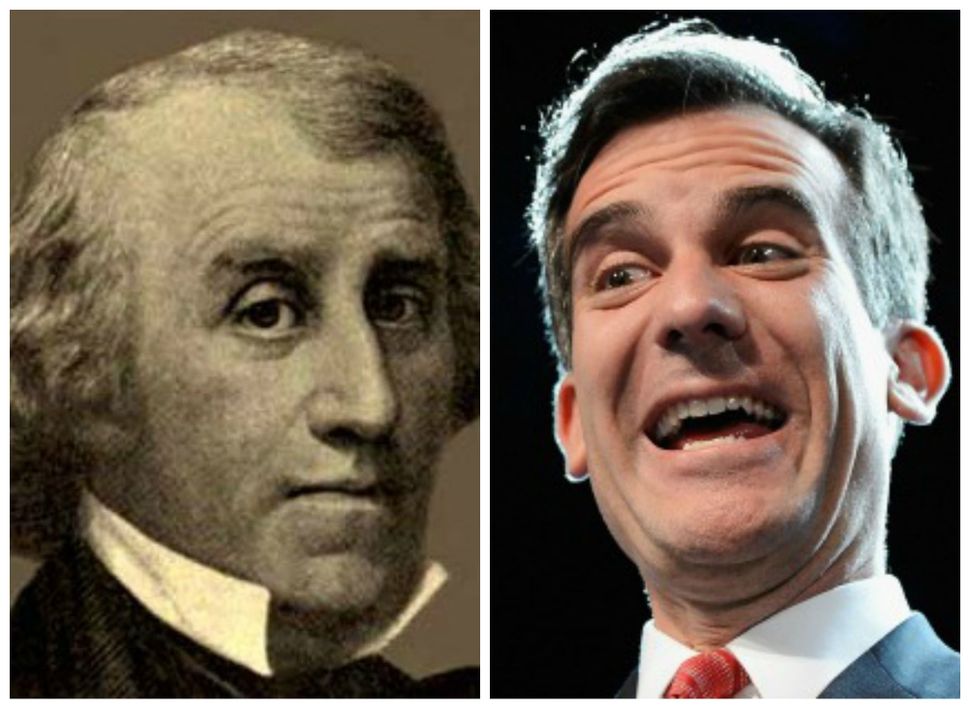 As they used to say at the old Yiddish Forward, hold the back page!

Not meaning to rain on anyone’s parade, I’m forced to point out that Eric Garcetti is not the first Jewish mayor of Los Angeles. In fact, he’s the third.

The first was Don Abel Stearns (1798-1871), Boston-born, a naturalized Mexican citizen who settled in Pueblo de Los Angeles in 1829. He served as Alcalde (mayor) of Los Angeles under U.S. rule from 1850 to 1851. He was the last chief executive of L.A. to hold title of Alcalde rather than mayor.

The second was Bernard Cohn (1835-1889) (acting mayor November 21-December 5, 1878). Prussian-born, he was an elected member of the Los Angeles Common Council (forerunner of the city council) and was chosen by the council to serve as acting mayor from November 21, 1878, following the death of Mayor Frederick A. MacDougal. He served two weeks. During that time he ran for mayor in his own right but lost to former mayor James R. Toberman. Toberman replaced Cohn on December 5, 1878.

Both were rather colorful figures. Stearns was a prominent California civic leader under both Mexican and U.S. rule, made the first recorded shipment of California gold to the U.S. Mint in 1842, became the largest landowner in California by 1860, lost everything in the drought of 1863-64 and made another fortune by the time of his death in 1871.

Cohn, who moved from Prussia to L.A. in 1857, is best remembered for making a $62,000 loan to the last Mexican governor of California, Pio Pico, to help him pay off gambling debts. As collateral Cohn received a deed to all Pico’s property, which Pico, being illiterate in English, mistakenly thought was a mortgage. Pico died penniless.

This may or may not be the origin of the phrase, “If you want to get there fast, take Pico.”

Cohn was also famous for having two families, one Jewish, the other Catholic, at opposite ends of town.

Postscript: There seems to be some debate out there about whether Stearns was in fact mayor, and also about whether he was actually jewish. Here’s what i know:

From the files of the Los Angeles County Board of Supervisors:

…In 1841 Stearns married into the wealthy Bandini family. He was 43 and his bride, Acadia, was 14. A year later he bought the huge 20,000-acre Rancho Los Alamitos as a summer home for his wife. Stearns became one of the largest landowners and cattle ranchers in the area.

In 1849 he was chosen to represent his district at the Constitutional Convention. The following year he became alcalde of Los Angeles and was the last alcalde of the pueblo as the title of the position changed to mayor. He went on to be a state assemblyman in 1851, a supervisor for Los Angeles County in 1860, and in later years a justice of the peace and a member of the Los Angeles City Council….

From the records of the Historical Society of Southern California:

…One of the most successful of these immigrants from the United States was Abel Stearns who arrived in 1829. He became “Don Abel Stearns” after adopting Mexican citizenship and converting from his Jewish heritage to Catholicism. Stearns was a imposing, if controversial figure, nicknamed Cara de Caballo (“Horse Face”) because of his long-jawed countenance. Once accused of being a smuggler, Cara de Caballo was amassing the largest fortune of his day when he married Arcadia Bandini. She was 14. He was 43.