The Creeping Jewish Fundamentalism in Our Midst 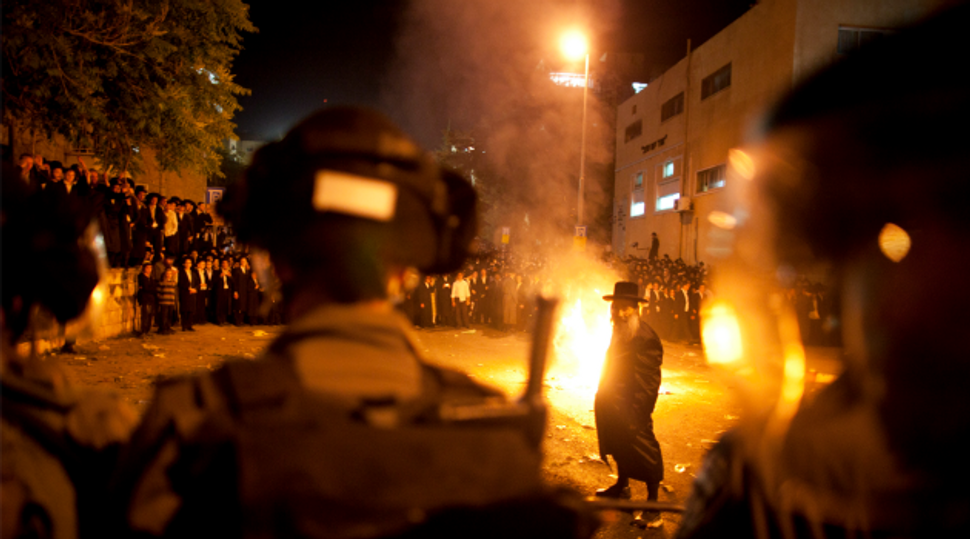 War in the Street: Ultra-Orthodox demonstrators set fires during a protest against Israeli government moves to scrap their exemption from national service. Image by getty images

American Jews are actively supporting a demographic trend that threatens the fabric of American Jewish life: the unchecked growth of Jewish fundamentalism.

Call them what you will — ultra-Orthodox Jews, “fervently Orthodox” Jews, Haredim, black hats. They will soon become the majority of affiliated Jews in the metropolitan New York area, and the religious majority in Israel. The results will be catastrophic.

We’ve read stories recently of Haredim in Israel comparing Israeli politicians to Hitler and throwing stones at women praying at the Kotel; of Haredim in New York fighting to restrict the prosecution of sex abuse claims; of Haredim in Germany threatening the fragile truce on circumcision by defending the practice of adult men sucking blood directly from the penises of infants.

And that is just the tip of the fundamentalist iceberg. In recent months, the Forward has depicted the coercion and ignorance prevalent in American ultra-Orthodox communities: in brilliant essays by Judy Brown and Shulem Deen, in exposés of Hasidic money laundering, and longer ago in its award-winning coverage of the Agriprocessors meat processing plant. And of course, “fervently Orthodox” leaders have defended, justified, covered up and explained away sexual predators in a way that would make a Vatican official blush.

What has emerged from all this is a picture of a subculture that looks more like “The Sopranos” than like “Fiddler on the Roof” — a world in which a small elite maintains power at the expense of thousands of serfs.

What we’ve also learned is that this entire apparatus of fear, manipulation and power mongering has been supported by you and by me.

We’ve learned, for example, that flagship institutions of ultra-Orthodox life are basically on the dole. Seventy-six percent of students at one of the most prominent yeshivas in the country, in Lakewood, New Jersey, are receiving Pell grants. Indeed, the top three institutional recipients of these grants are ultra-Orthodox yeshivas.

The Chabad-affiliated Michigan Jewish Institute scored $25 million in federal aid meant to go to low-income students, despite an appalling academic record and due largely to chicanery involving an online application mill.

And of course, Haredim in Israel put their American brothers to shame, diverting millions of shekels to schools that don’t provide a basic Western education, rabbinates filled with cronyism and a welfare system that keeps an entire sector of the population dependent on government subsidies.

In other words, the entire edifice of ultra-Orthodox power rests on gaming the system.

Meanwhile, “modesty brigades” and families willing to disown anyone who dares to leave patrol the walls of this contemporary shtetl. Imagine you’re an 18-year-old woman in a Hasidic enclave. You’re married, with two or three kids already, and you’ve been told that “outside” everyone is evil, depraved and miserable. You barely read English. And you know that when your cousin left, she was destitute, disowned and disgraced. There is no one to help you if you leave. You’re on your own. So of course you stay.

We are abandoning thousands of our fellow Jews to this hierarchy of power and abuse. We are doing nothing to help them.

And pretty soon, the hierarchy will overwhelm us. Demographers tell us that 49% of New York’s Jewish children are Haredi (either Hasidic or “yeshivish”). Especially in light of non-Orthodox disaffiliation, New York Jewry, within a generation, will be fundamentalist, poor, uneducated and reactionary. Non-Orthodox Jews will look like the secular Persians of Iran: once the complacent majority, now a minority oppressed by fundamentalists.

The good news is that since we are propping up this system, we have the power to weaken it.

First, mainstream American Jewish organizations must stop pretending to have common cause with Jewish fundamentalists. Just as mainline Christian denominations recognize Christian fundamentalism to be a threat to their religious values, so the mainstream of Jewish denominations — including Modern Orthodoxy — must recognize that this distortion of Judaism is actively destructive to Judaism itself.

Like Christian fundamentalism, Jewish fundamentalism is extremely new. It arose in response to modernity, and it radically changed Jewish values. Formerly, the Jewish mainstream balanced strictness and leniency: In the battle between the strict Shammai and the lenient Hillel, Hillel always won.

But the Haredi world is a phalanx of Shammais. The strictest is always the best. Moses wore a shtreimel, the fur hat that many married Haredi men wear, at the Red Sea. Scientific knowledge is evil. These are radically new Jewish ideas presented as radically old ones. Those of us who do not share them must recognize them as a threat.

And then we can begin to act. Fortunately, we don’t have to fight coercion with coercion. We don’t have to compel anyone to change his or her religious beliefs. We just have to stop artificially propping up a system that otherwise would not exist.

For example? We can demand an end to all federal and state subsidies to yeshivas that do not prepare students for contemporary economic and civic life. We can oppose all Jewish-fundamentalist efforts to take advantage of government or Jewish communal largesse. We can support our allies in Israel that are fighting for religious pluralism, for equal conscription of all Israelis, for civil marriage and for the defunding of the rabbinate.

And perhaps most important, we can publicly and financially support those struggling to escape from the oppression of ultra-Orthodoxy. For example, the organization Footsteps does wonderful work to help ex-Haredim transition to the modern world. But it is tiny in comparison with what we need. We need a Giant Footsteps —a major federation initiative to support those who leave and communicate to those trapped outside that there is vibrant Jewish life beyond the ghetto wall.

We fail to act because, I think, deep in the hearts of non-Orthodox Jews there lingers the belief that the Haredim are the real Jews, or the safeguards of our future, or perhaps the sweet, cuddly Tevyes of our imagined Yiddish roots.

But they are not. Of course, there are wonderful Haredi Jews out there. But the Haredi system threatens the demographic and cultural stability of the Jewish community, both in the United States and in Israel. Jewish fundamentalism is not good for the Jews.

The Creeping Jewish Fundamentalism in Our Midst