Ultra-Orthodox Bring Pride, Charity and Vitality Back to Jewish People 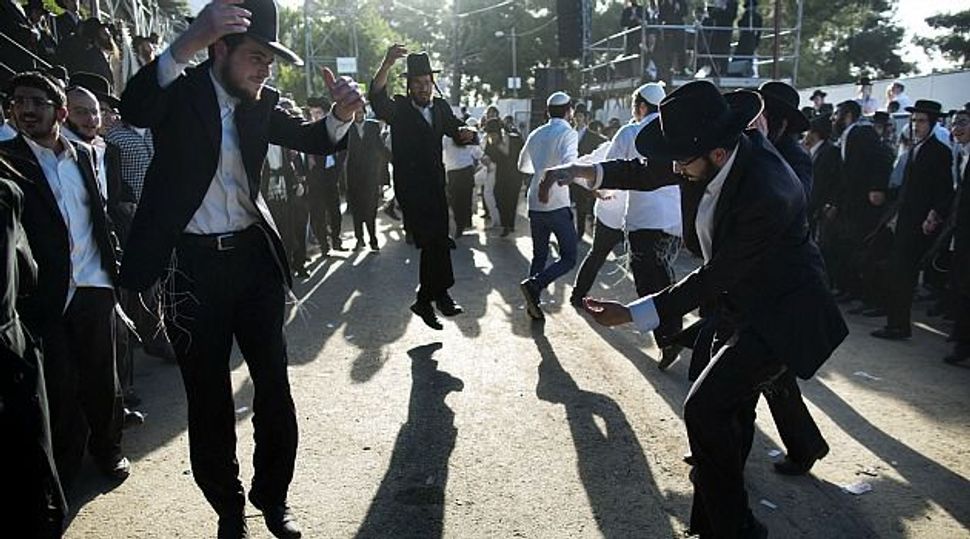 In the summer of 1979, my wife and I came to Jerusalem on our honeymoon. I had completed two years of big-firm legal practice in Chicago and was headed to the Jewish Theological Seminary rabbinical program in the fall. I soon left the preparatory program for which we had come, and my wife and I spent the rest of the summer splitting our time between ulpan classes and study at the Ohr Somayach yeshiva’s men’s and women’s branches.

At the end of the summer, my wife, who was not even sure she believed in God when we married (but did not see that as problematic for a rabbi’s wife), said to me, “If Judaism is going to be the center of our lives, doesn’t it make sense for us to remain around people for whom it is the center of their lives for at least another year.”

We did, and are still in Israel 34 years later.

None of the tens of thousands of Jews from similar backgrounds to my wife and me (the so-called ba’alei teshuva) who have become members of the Haredi community over the last 40 years would recognize the community we chose to join in Jay Michaelson’s pointillist construct of Haredi society based on stringing together every negative headline he can find.

Let me try to describe the attraction of the community that induced my wife and I to dramatically alter our life trajectories. Though I admired various qualities of my professors at Yale Law School, it never occurred to me that any of them was a model for what a human life could be.

I had not yet been exposed to role models whose lives were of a piece, and not divided by all the familiar dichotomies of modern life — work and play, work and family, public morality and private morality. That quality of living a unified life, which I could not define but found lacking in everyone I knew, most of all myself, has its source in the knowledge that whether we are in solitude or among a multitude, we are before God.

Our first teachers presented a vision of life filled with meaning and purpose, in which each moment presents an opportunity for growth or decline (standing still is impossible), and in which each correct choice opens up pipelines of Divine blessing to the world. It is a world in which “killing time” is tantamount to killing oneself.

The pure intellectual thrill of Jewish learning — a learning more challenging and rigorous than anything I experienced at the pinnacle of American academia — was also a powerful magnet. Nor is the joy of learning solely intellectual: Every time I open up the Talmud I am joining a conversation/debate that has been ongoing for more than two millennia.

We discovered for the first time true communities, in which people extend themselves for one another in extraordinary ways and share the rhythms of the seasonal calendar. When a study partner of mine, a Harvard and Oxford-trained classicist, passed away suddenly, leaving behind ten orphans, we raised $300,000 for his family, most of it in the form of monthly bank orders from Talmudic scholars, with large families and monthly incomes of $2,000 or less. When a neighbor needed a liver transplant, a group of a hundred of so men gathered every night for two weeks, until he was out of danger, to recite Tehillim on his behalf.

It is a community of extraordinary generosity. In my neighborhood alone, there are 200 or so free loan societies listed in our neighborhood directory for everything from medicines to bridal gowns to infant pillows for the bris.

Virtually every major volunteer organization in Israel was founded by Haredim: Yad Sarah, which dispenses medical equipment for home use; Ezer M’Tzion, which has created the world’s largest Jewish blood marrow registry; Ezra L’Marpeh, which handles over 50,000 emergency medical referrals a year. The late Jerusalem Post columnist Sam Orbaum, himself a sometime Haredi critic, once wrote, “the charity, social consciousness, good deeds, communal welfare, and human kindness [of the Haredim] may be unparalleled among the communities in this country.”

In both the United States and Israel, numerous Haredi-founded organizations offer summer camps, travel, and weekly activities for Jewish children suffering from cancer or other debilitating diseases. In the wake of the major aliyah from the former Soviet Union, Haredim created an entire school system in Israel, SHUVU, offering the highest level secular studies, with an enhanced Jewish curriculum, for children from Russian-speaking homes cut off from any knowledge of their Jewish heritage for seventy years.

Is every member of the Haredi community, then, like the exemplars to whom my wife and I were introduced at the beginning of our journey? Obviously not. Is it an idyllic society, with none of its own pathologies?

Again, no. As a member of the editorial board of an on-line journal, Klal Perspectives, devoted to discussion of communal challenges and the search for solutions, I know well the multitude of challenges.

Is there too much endemic poverty aside great wealth? Yes. But as economist Herbert Stein famously noted, “Trends that can’t go on forever won’t.” Israel’s child support allowances, niggardly by European standards, and its highly regressive tax structure (18% VAT) make it impossible to feed large families, even within the parameters of the simple Haredi lifestyle, without gainful employment. Haredi young people are flocking into academic degree programs and into the labor force — though not fast enough to satisfy their critics.

Over the last twenty years, I have become a widely read communal gadfly pushing the community — and myself — to live up to the ideals that led my wife and I to join the Haredi world in the first place. But those ideals provide a language for self-criticism, and common core of assumptions around which communal debate can proceed.

David Goldman notes an interesting pattern. Churches that have lost all religious vitality (including the Church of Scotland, the Church of England, Presbyterians and Episcopalians in America) and nations facing demographic demise (including nearly all of Western Europe) become consumed with hatred for the Jews and the state of Israel. The eternity of the Jewish people, its exemption from the otherwise universal historical pattern of civilizational rise and fall, engenders bitter animosity from those suffering premonitions of their own societal death.

The same impulse animates Michaelson’s screed. His ultimate complaint about the Haredi world is that there are too many of them and they are too high a percentage of world Jewry. But instead of telling me to have fewer children, he should be addressing his complaint to his contemporary American Jews. Urge them to find something that gives meaning to their lives, a set of values dear enough to transmit to future generations by producing children.

And if he and his friends hope for a Jewish future, let them heed the numerous jeremiads of Jack Wertheimer, former provost of the Jewish Theological Seminary, who warned that there will be no future for non-Orthodox American Jewry without a reversal of current trends — namely anti-natalism, acceptance, even celebration, of intermarriage, declining sense of Jewish peoplehood, and lack of theological seriousness. Above all let them rediscover, in Wertheimer’s words, “the distinctive commandments, beliefs and values for the sake of which Jews over the millennia have willingly and gratefully set themselves apart.”

The Talmud states that God took the children of Israel out of Egypt and called them, “my son, my firstborn son,” on account of the two words the nation uttered in anticipation of the receipt of Torah “na’aseh ve’nishmah (We will do and [then] we will understand).”

A Sadduccee once saw Rava learning Torah with such intensity that he did not even notice that he was sitting on his hands, which were dripping blood. The Sadducee charged Rava with being the member of an am pezizah — a heedless, uncalculating people — just like his ancestors who accepted God’s commandments without first knowing what they were.

Rava acknowledged the charge, for in that reckless passion for Torah lies the secret of Jewish eternity. No Jewish community that has cut itself off from Torah observance and study has ever survived for long.

The greatest contribution of the Haredi world is to have miraculously rebuilt in 60 years an entire world of Torah learning destroyed by Hitler, and to have maintained a passion for Torah study that radiates out to the entire Jewish world.

Jonathan Rosenblum is a columnist for the Jerusalem Post and Mishpacha Magazine, as well as the author of seven biographies of contemporary Jewish leaders.

Ultra-Orthodox Bring Pride, Charity and Vitality Back to Jewish People