What’s a Pro-Boycott Cartoon of Stephen Hawking Doing in a Jewish Paper? 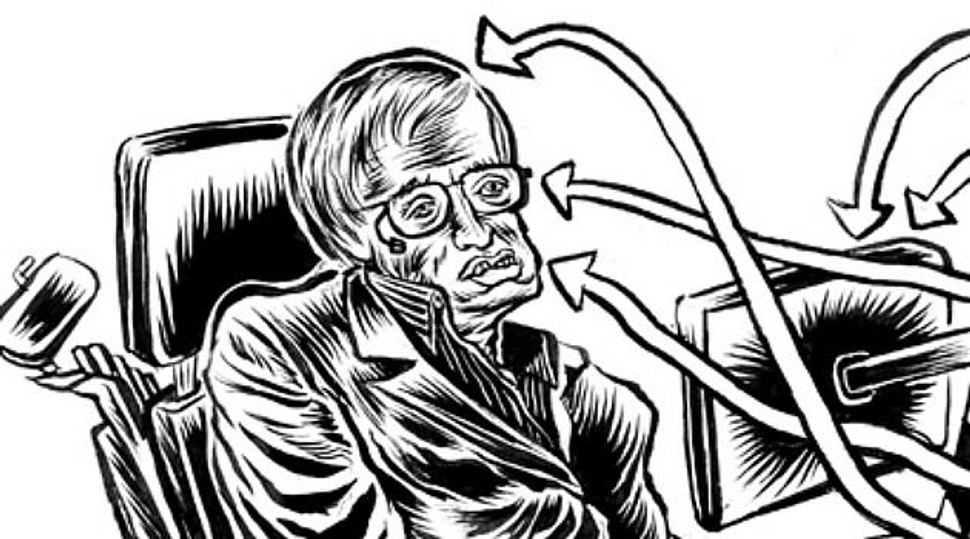 Would America’s best Jewish newspaper publish a cartoon in support of renowned British physicist Stephen Hawking’s joining the academic boycott of Israel? It would — and it did.

I can think of no other accurate way of describing the prominently featured appearance in a recent issue of the Forward of Eli Valley’s “A Brief History of Hawking’s Hypocrisy.”

It can be contended, of course, that this cartoon was not pro-boycott at all. All it did, one might say, was lampoon accusations made against the totally paralyzed Hawking that he was acting hypocritically, inasmuch as his own life-support system depends on an Israeli-designed computer chip that he did not choose to boycott, too.

But such a contention is disingenuous. Charging Hawking with hypocrisy for not pulling the plug on himself because he has been kept alive by Israeli technology is admittedly a rather poor argument, although perhaps not as poor as all that. (Israeli technology, after all, is not unconnected to research in the Israeli universities that the boycotters wish to treat as pariahs.) 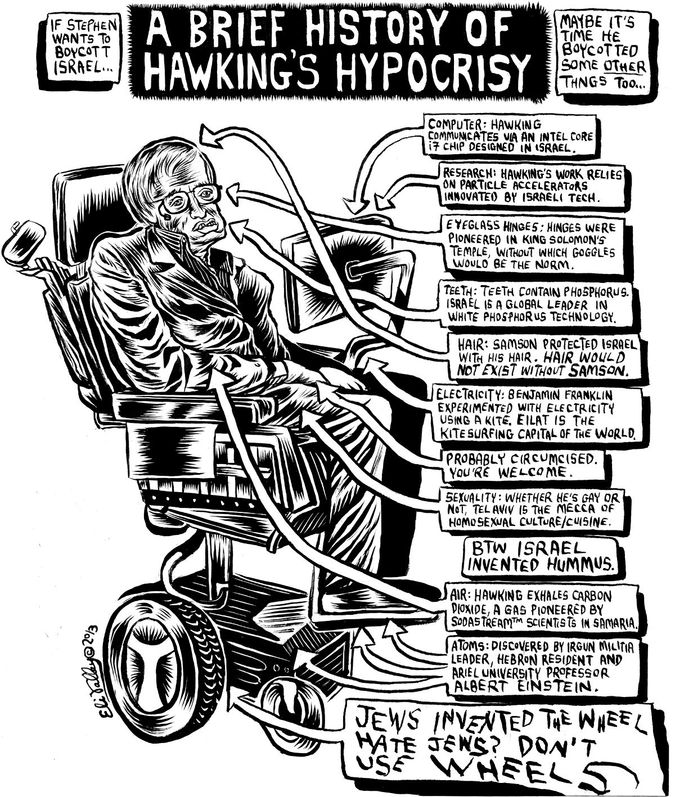 And in the Forward!

I am not saying, and I do not for a moment believe, that Stephen Hawking has an anti-Semitic bone in his body. I am sure that many other supporters of the boycott do not, either. Many are no doubt sincerely convinced that Israeli policies toward the Palestinians are immoral and unjust.

But that isn’t the point. The point is that no one is boycotting other countries for doing things as bad as — and often far worse than — anything Israel has done. A list of such countries would not fit into the space of this column.

Suffice it to mention Russia’s demolition of Chechnya, which makes Israeli actions in the occupied territories look benign; the Sinification of Tibet by government-sponsored Chinese settlement far more massive than Jewish settlement in the West Bank, or the 65 years of harsh Indian military rule over a Kashmir denied self-determination longer than the Palestinians have been.

Who is boycotting Russia, China or India?

It’s time we acknowledged the fact that most pro-Palestinian sentiment has very little to do with the Palestinians.

The most militant boycotters of Israel don’t give a damn about the Palestinians any more than they give a damn about the Chechens or Kashmiris. What arouses their passions is Jews. They couldn’t care less when Palestinians are oppressed by someone else — by the Lebanese, for example, who to this day deny citizenship to all Palestinians living in Lebanon, even if they are third and fourth generation, and keep them penned in refugee camps. As long as it’s not Jews who are doing it, it’s quite all right.

Men like Stephen Hawking get roped in by such types. I don’t doubt Hawking’s good intentions. But good intentions are no substitute for good judgment, and Hawking’s judgment in this matter has been atrocious.

So has the Forward’s. Nobody is asking it to whitewash Israel. Israel has many faults, just as it has many virtues, and it is a Jewish newspaper’s responsibility to report on both.

But it is also a Jewish newspaper’s responsibility to understand that when Israel should be defended against its enemies, it must be defended, because if Jewish newspapers don’t don’t defend it, who will? The boycott movement is the work of Israel’s enemies. They are the Jewish people’s enemies, too. One doesn’t aid and abet the enemy.

What’s a Pro-Boycott Cartoon of Stephen Hawking Doing in a Jewish Paper?