At Massive Anti-Draft Protest, Haredi Jews Came Together — But Not on Zionism 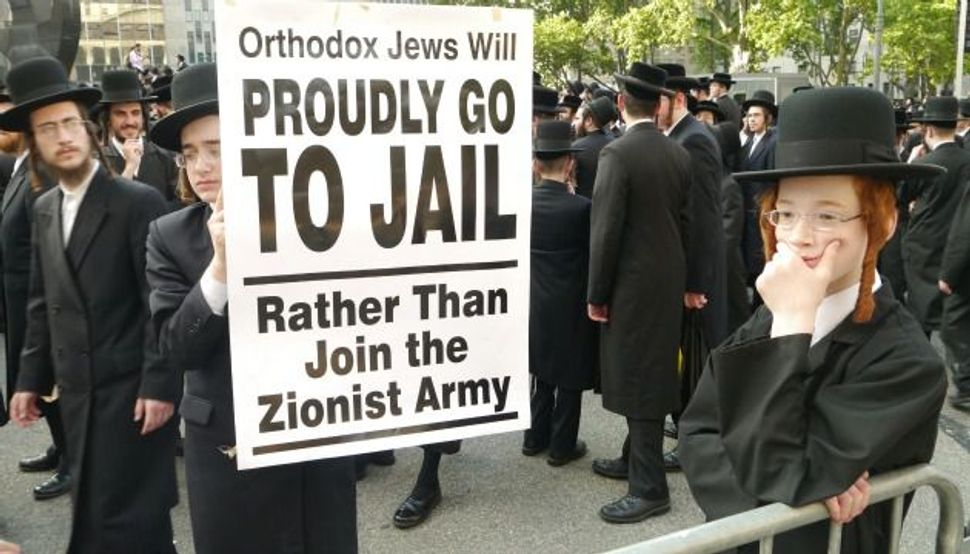 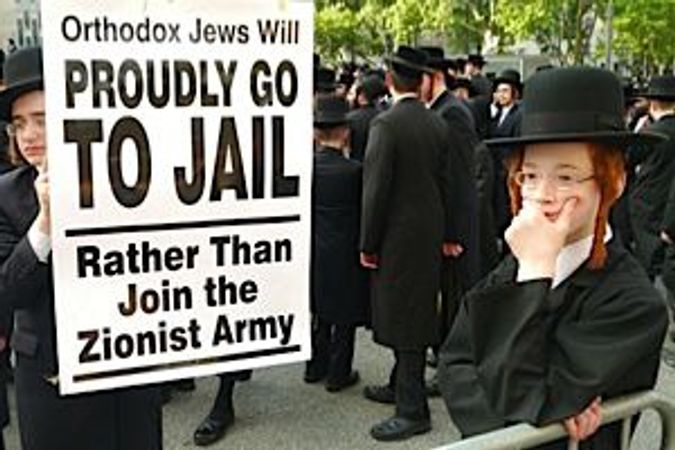 In an unusual show of unity, various streams of ultra-Orthodox Jews joined together June 9 in a massive rally in downtown Manhattan to protest the Israeli government’s recent efforts to draft yeshiva students into the military.

Even the dueling factions within the Satmar Hasidic movement put aside their differences to organize the protest, and the feuding brothers who claim to lead the Satmar, Aharon Teitelbaum and Zalman Leib Teitelbaum, both participated. Organizers said the rally drew 30,000 people, virtually all men, to Foley Square. Other reports put the number at 20,000. The New York City police did not offer their own estimate.

The organizers tried their best to hide any anti-Zionist sentiments and focus only on the anti-draft message during the two-hour rally. Speakers on the stage repeatedly asked the crowd to put away any signs with messages against the State of Israel, and there were at least three cases in which protesters physically took down anti-Zionist signs held up by other protestors.

Yaakov Shapiro, an appointed speaker for the Satmar community, said in an interview with the Forward that even though he himself is anti-Zionist, the goal of the protest was to prevent the universal draft and, in his words, save Israel’s yeshivas.

But the anti-Zionist undercurrent bothered some of the protestors. An Orthodox man from the Syrian-Jewish community in Brooklyn, who requested that his name not be published, said he came to the rally because he agreed with the general message, but he felt very uncomfortable with the anti-Zionist signs he saw.

“I don’t share the philosophy of these anti-Zionist protestors,” he said. “The rally is not against the state of Israel. It’s against certain member of the (Israeli) administration like Yair Lapid, and the new laws they are now implementing.”

Lapid’s Yesh Atid party came in second in Israel’s recent parliamentary elections by promising to extend the draft to ultra-Orthodox men and “share the burden” of military defense. A Knesset committee agreed on May 29 to a piece of draft legislation that would force most ultra-Orthodox men to serve in the military and impose criminal penalties on draft-dodgers.

Before the rally even began, the Rabbinical Council of America, which represents mainstream Orthodoxy, published a statement condemning the protest, labeling it as anti-Israel. In a press release, Rabbi Mark Dratch, the RCA’s executive vice president, called on all Jews, Orthodox and not, to “redouble their efforts to explain to their fellow Americans their commitment to the Jewish State and its central position in their thinking, even when they find fault with certain positions of its government, as happens with the policies of any true democracy.”

At Massive Anti-Draft Protest, Haredi Jews Came Together — But Not on Zionism