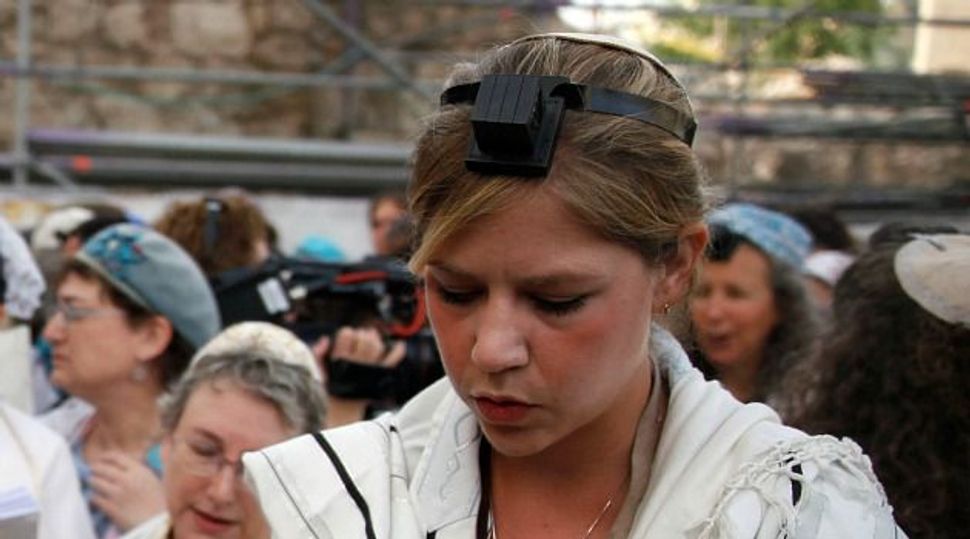 At the Kotel, the Jewish value of elu v’elu (“These and these are the words of the living God”) has degenerated into name-calling as well as into rock, trash and coffee throwing.

These objectors claim that the women who come together on Rosh Hodesh — the beginning of the Jewish month — to pray in tallitot and tefillin are trashing the tradition of the place. To which we offer two observations: One, tradition is most holy when it is varied and authentic, not monolithic and mechanized. And two, no one sect, certainly not in a democracy, may dictate “tradition” — when it began, or what it encompasses.

You want long-standing tradition? Look at the Jewish tradition regarding disputes — the written word; civil, if passionate, debate. Our tradition demands that we debate on the merits instead of denigrating our opponents. Hillel and Shammai embodied Judaism very differently, but both views were valid.

The decision to grant ultra-Orthodox rabbis control over all Jews (and non-Jews) at our holiest site — and over the contours of our life cycle from birth and conversion to death — was like ceding the whole Talmud to just one commentator. As women who pray collectively at the Kotel on Rosh Hodesh — one of us wears a tallit, and one of us, by the way, does not — we are each in a direct relationship with God. We do not accept that the nature of that relationship is subject to media debate, or to scornful dismissal. We are as serious about that relationship as any other Jew, and we question the legitimacy of a religious monopoly that, in a democracy, should never have been granted in the first place. So, let’s take the arguments back to the daf — to our page in Jewish life, theology and history. Here we outline the arguments against us as we have come to understand them (links to the sources of these statements are provided in the online version of this oped).

1. Non-Orthodox prayer at the Kotel is an effort to liberate, evangelize or otherwise dictate to Orthodox women. We have no objection to Haredi women, or men, praying as they choose, and no desire to evangelize or inspire them.

Live. Let live. And if you cannot do so, the burden is on you to explain why not. Take us as we are, instead of as some imagined evil plot you ascribe to us. But even if we were there to inspire, we may do that using any nonviolent communication we want. As you can, as well.

2. There is no genuine cause or conviction behind the women who worship at the Kotel. All of them are mere attention hounds seeking to create some kind of media circus or land a reality television show.

Should ultra-Orthodox rabbis install a soul scan next to the metal detectors at the entrance to the wall? Would anything less convince them? We believe that God already has a soul scan, and that’s enough for us. Accusations that one’s deepest religious convictions are feigned, wrapped around us like a fake tallit, are offensive. These women wear their tallitot at synagogue. Some are rabbis. Some have shown up every month for two decades. But even if we were going to the Kotel because we’re desperate for media attention, we are allowed to do that in a democracy.

3. Non-Haredi women are “political,” whereas the ultra-Orthodox are spiritual.

This is a strange argument — that others are being “political” just because you don’t like their politics. It’s like accusing Medgar Evers or Martin Luther King Jr. of being “political” when they fought for their civil rights in the 1960s. Any group seeking to effect social justice is by definition “political.” And any group seeking to thwart social change is equally “political.” At the Knesset meetings at the Kotel, Rabbi Shmuel Rabinovich, the Wall’s official rabbi, is there alongside Anat Hoffman, leader of Women of the Wall. People who live in glass synagogues shouldn’t throw stones. Or bottles. Or chairs.

4. Any woman who isn’t wearing wool stockings is by definition a (fill in the blank) harlot/lesbian/[provocateur][6].

Opponents claim that non-Haredi women must be sex objects and must want to be sex objects. Under this analysis, when men dance, sing and pray, it’s spiritual; when women do it, it’s pole dancing. We would also query whether elevating the “special purity” of one type of Jewish woman over another has any place in political debate. Again, Israel is a democracy. And Tamar should be welcome at the Kotel regardless of Judah’s (false) pronouncement.

5. We will not be satisfied with the right to pray freely; the larger agenda is to do something really super-bad.

We do want to practice Judaism as we began to understand it the day we stood at Sinai. We want to choose our rabbis and communal practices for everything from birth to grave. We don’t agree that in 2013, in a democratic state, all women can be made to sit at the backs of buses or to pray in silent whispers. So yes, this argument is true (minus the super-bad part).

6, It’s a slippery slope. Next we’ll have a) nudist sacrifices at the Western Wall, and b) messianic Jews.

a) Israeli law prohibits public nudity, fires and animal slaughter. We don’t need theocracy to enforce that. b) Wide, messy communal norms have kept us a vibrant, defined people until now. Narrowing religious authority to a few men takes us further from the Sinaitic idea of a kingdom of priests, where Jews each engage our covenant with God.

7. Some founders and participants of Women of the Wall are American, so the whole project can be dismissed as a tawdry American effort to impose their icky, lipsticky, feminist values on Israel.

Many of us are American. Do you dismiss Ovadia Yosef as imposing his Iraqi values? When Daniel Kahneman, an Israeli American, won the Nobel Prize, did anyone dismiss him as too American? Is Yisrael Beiteinu less legitimate because of its Russian founders and supporters?

8. In matters of religion the party most apt to be offended should always win.

The argument goes something like this: Since our prayer is more upsetting and horrifying to the Haredim, the right and decorous thing to do is to honor them with our capitulation. But the whole enterprise of speculating about each side’s relative sensitivity is like speculating about relative purity of body or religious conviction. It is an argument that merely repurposes all the stereotypes recited above: that women seeking to pray as they choose in the women’s section of the Kotel are less passionate, less sensitive or less heartfelt than other Jews. These are efforts to delegitimize and stigmatize the opponent, in lieu of entering into a meaningful debate about ideas. It’s an age-old — dare we say “political” — tactic. It’s also cheap. Take us on our own terms, accept that we are as worthy of our views as you are. That would require seeing us as equally human, which might also end the chair throwing. But it is the only, and happily the most Jewish, path to resolution.

9. Save your energy for real problems.

It’s patronizing to tell us to save our energy for real problems — like a nuclear Iran, or world hunger. Telling other people that their political concerns are insubstantial is lacking in humility. This is about more than our holiest sites. To us, this dispute is about a juncture between a narrowing, hardening Judaism and the promise of Sinai. We are fighting for Sinai.

Dahlia Lithwick is a senior editor at Slate, living in Jerusalem for the year. Rabbi Susan Silverman is an adoption advocate and the author of forthcoming book “Casting Lots: How Raising My Children Helped Me Find God.”