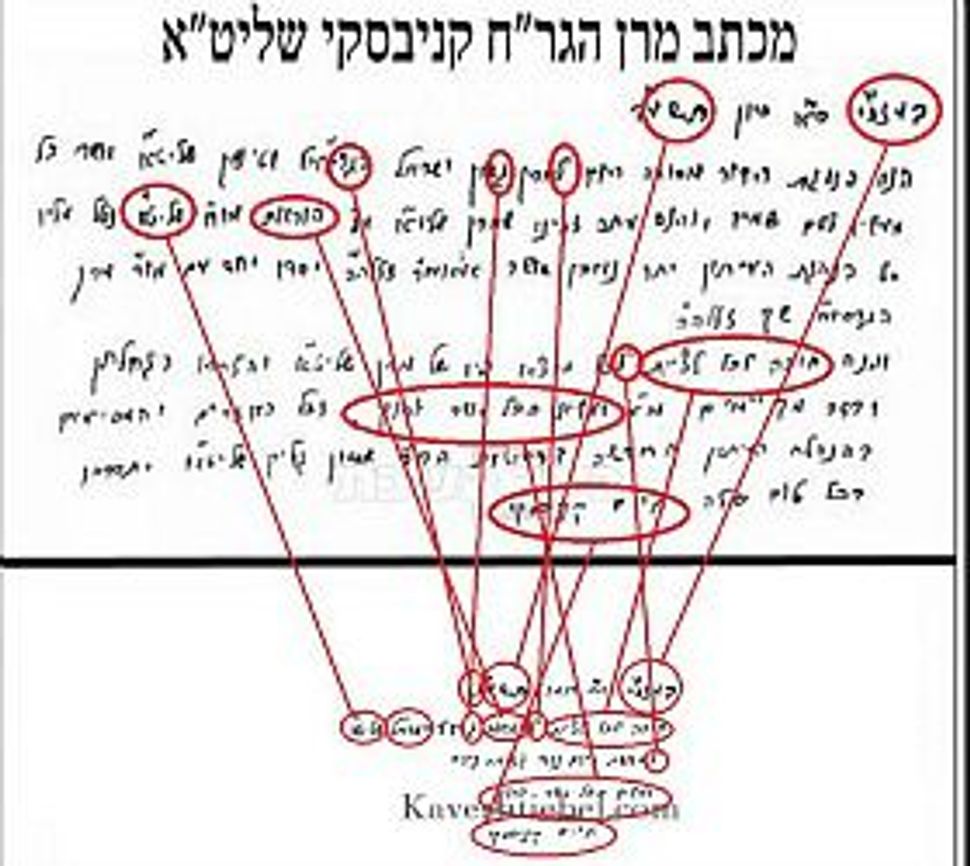 Was the weekend rally in New York against Israel’s plans to draft ultra-Orthodox Jews boosted by a prominent rabbi’s forged endorsement?

According to a writer on the Hasidic Yiddish forum KaveShtiebel.com, a letter in support of the Satmar-led demonstration by Rabbi Chaim Kanievsky, one of the foremost leaders of the Lithuanian Haredi sector, was forged.

The letter, which appeared to be a handwritten note by Kanievsky, was circulated Sunday morning by email and social media and posted to various websites. It reads: “It is an obligation upon all to heed the ruling of the Gedolei Yisroel to protest today against the draft decree.”

The KaveShtiebel writer, who goes by the name “Yeedel,” points to key idiosyncratic phrases in the letter that appear to be lifted from an earlier unrelated letter by the rabbi.

Before Sunday’s event, which was ultimately attended by up to 30,000 people from across the Haredi spectrum, were conflicting reports over Kanievsky’s endorsement, with various letters circulating in his name, some calling on his followers to increase Torah study instead of attending mass rallies. At stake here was whether the event would be seen as a mostly Satmar demonstration, or pull together a broad display of unified solidarity.

An article on the American Haredi website The Yeshiva World was quick to blame Satmar organizers. “The forged letter,” the article says, “speaks values of the organizers act to delude the purpose of the mass protest, especially the desecration of the name of a Godel HaDor, in attempt to deceive the general, non-affiliated and Yeshiva, public to attend the protest.”

According to the Yeshiva World article, Rabbi Kanievsky’s family confirmed that the letter was forged. It is unclear whether the identity of the forger has been identified. Kanievsky himself has apparently not commented on the dispute.

The demonstration, held Sunday in downtown Manhattan’s Foley Square, was organized by the Satmar communities of Williamsburg and Kiryas Joel, with the leaders of both Satmar factions attending, setting aside their longstanding feud over the Satmar leadership.

That in itself was a major achievement in the fractious Hasidic world.

But the attendance of significant numbers from New York and New Jersey’s large Lithuanian, or “yeshivish,” community — which has historically not attended Satmar-led demonstrations due to broader ideological differences regarding the State of Israel — was seen as a demonstration of Satmar influence.

About a quarter of the attendees at the rally appeared to by yeshivish. It’s impossible to gauge the importance of Kanievsky’s endorsement in boosting these numbers.

But the controversy has certainly cast a pall over claims of its marking a sea change in relations between the groups.

Shulem Deen is a former Skverer Hasid and the founding editor of Unpious.com.