Speaking Up for Peace 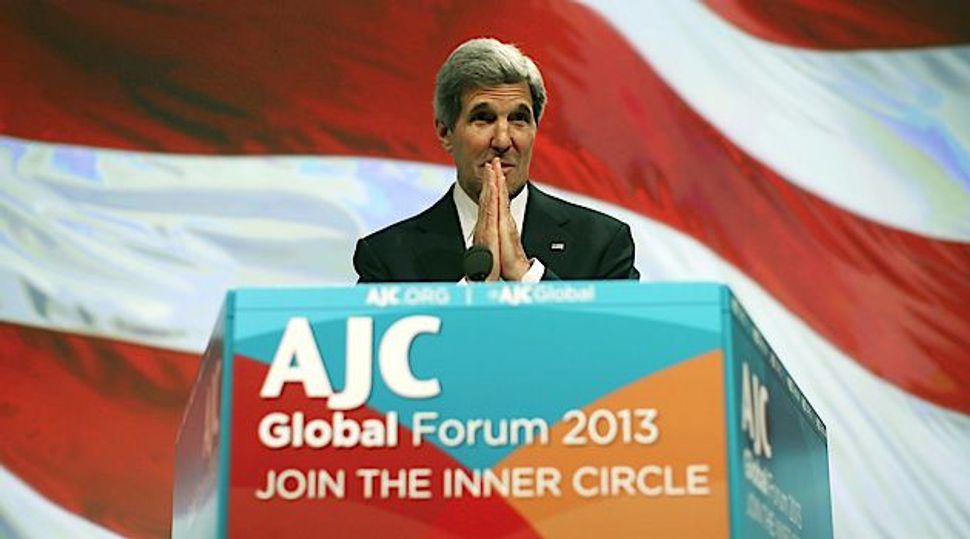 Backing Kerry: After a period of silence, the American Jewish Committee has spoken out in support of John Kerry?s call for peace talks. Image by Getty Images

In last week’s edition we criticized the silence of most Jewish organizations after Secretary of State John Kerry, addressing an American Jewish Committee forum in Washington, called on American Jews to support the Israeli-Palestinian peace process. Only a tiny number of organizations had taken up the call (including two we inadvertently omitted, Ameinu and the Israel Policy Forum). The leaders of the other major pro-Israel advocacy groups, we said, “know that Kerry is right, and that their public is largely behind him. It’s time they got behind him, too.”

We’re pleased, therefore, that one of the most influential national Jewish organizations has stepped forward and broken the silence: the American Jewish Committee. In the few short weeks since Kerry’s June 3 speech, AJC has acted not once but twice to honor the secretary’s call. On June 12 the committee publicly praised Prime Minister Netanyahu for reprimanding his deputy defense minister, Danny Danon, who had said in an interview that a majority of Israel’s governing coalition would oppose a Palestinian state. And again, on June 17, the committee criticized Israeli economy minister Naftali Bennett for declaring in a speech that the “attempt to establish a Palestinian state in our land has ended,” and that the “most important thing in the Land of Israel is to build, build, build.”

In the committee’s public statement, executive director David Harris called Bennett’s remarks “stunningly shortsighted” for “rejecting outright the vision of two states for two peoples.” That needed to be said. Far more significant, though, is what Harris said next: that since Bennett “is a member of the current Israeli coalition government, it is important that his view be repudiated by the country’s top leaders.”

AJC justifiably prides itself on its robust international activism and willingness to challenge governments and officials around the world when they take actions that endanger the Jewish people or the Jewish state. It’s good to see they’ve begun applying the same standard to officials of the Israeli government.

We hope to hear others speak out in the days ahead. It’s important for Israel’s sake, for America’s and for our own.

Speaking Up for Peace