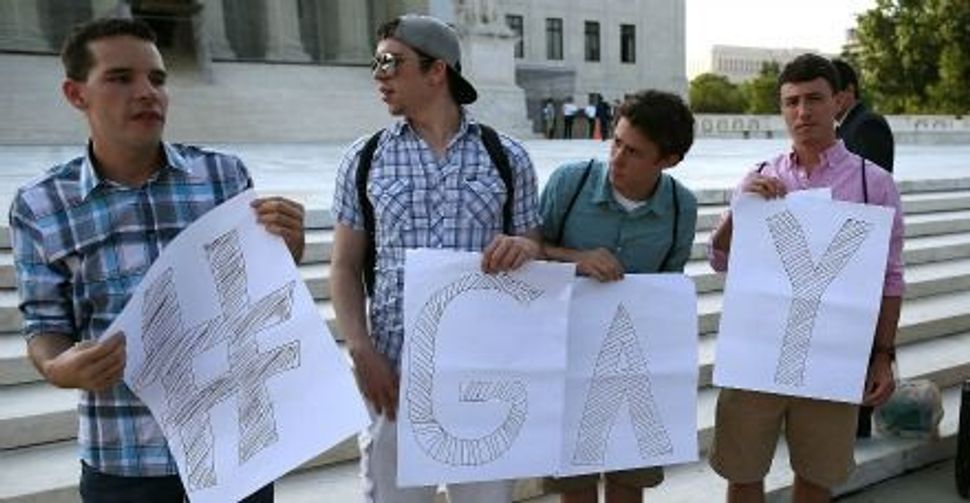 News of the Supreme Court’s landmark decision to pave the way to gay marriage found gay Jewish leaders at the end of a meeting with two dozen Democratic senators on Capitol Hill. A staffer passed a note to Sen. Chris Coons (D-Del.) reading: “DOMA is struck down” and the senator shared the news with the Jewish leaders, gathered for their annual meeting with the Democratic steering committee and cheers were heard from all corners of the room.

“I got hugs and applauds,” said Alan Van Capelle, CEO of Bend the Arc who led a gay rights movement before joining the Jewish organizational world. Van Capelle whispered to himself the Jewish blessing of “Shehecheyanu,” thanking God for “keeping us alive to see this moment,” he recalled.

From there Van Capelle rushed to the steps of the Supreme Court to celebrate with other gay rights activists. In an interview while surrounded by crowds applauding the decision, Van Capelle said it was “the first moment in which I felt free in this country.”

He then took the train back to New York, where he plans to go directly to his Lower East Side home and “give a kiss to my partner Matt and a hug to my son Ethan.”

Most Jewish communal leaders celebrated the landmark Supreme Court decision striking down the Defense of Marriage Act. The Jewish community, with 81% of support for gay marriage according to public opinion polls, is the constituency most supportive of marriage equality, second only to the LGBT community in its backing of the rights of gays and lesbians to marry.

“We believe that this is one of the necessary steps to ensure that the human rights of people of all sexual orientations are respected everywhere in the world,” said Ruth Messinger, president of the American Jewish World Service in a statement. AJWS one of the world’s largest funders of LGBTI rights across the world.

All Jewish Supreme Court justices: Ruth Bader Ginsburg, Stephen Breyer and Elena Kagan, voted with the majority against DOMA. The key attorney representing Edith Windsor in her challenge of the Defense of Marriage Act, was Roberta Kaplan a New York Jewish lawyer.