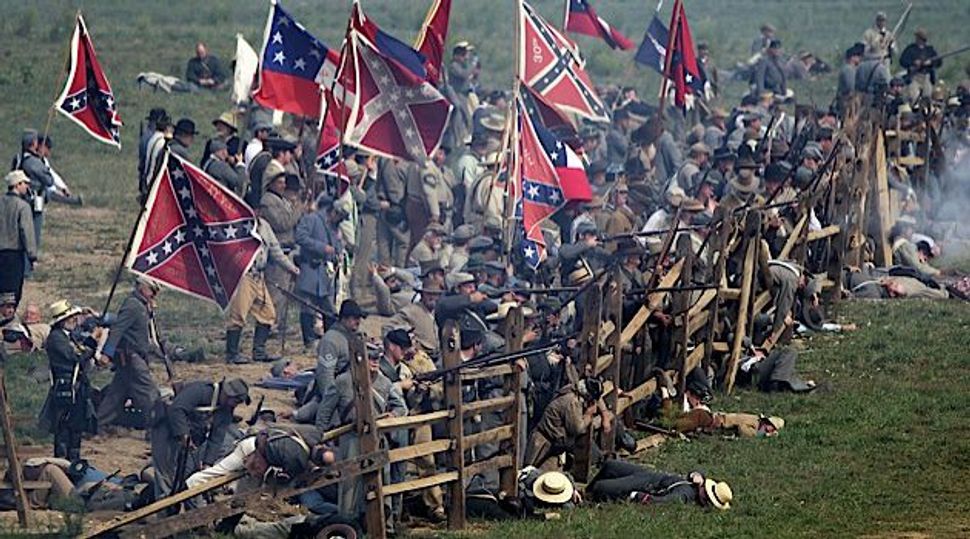 Whenever I told someone that I was working on an exhibition called “Passages Through the Fire: Jews and the Civil War,” I typically got two responses. Both reflect the need for the exhibit (now on display at Yeshiva University Museum in New York), which presents the widely forgotten story of the full participation of Jews in the nation’s great existential crisis.

My sister’s reaction was typical: There were Jews in the Civil War? Who knew?

The second most common response was in some ways more interesting: The Jews who fought in the Civil War were against slavery, right? The discomfiting answer: not so much.

As Jewish historian Dale Rosengarten expresses it, quoting a Talmudic precept: “The law of the land is the law of the Jews.” From a modern perspective, it seems anomalous that a people whose history hinged on an epic escape from servitude would not have been deeply troubled by America’s “peculiar institution” — but few were.

Some Jews owned slaves, a few traded them, and the livelihoods of many, North and South, were inextricably bound to the slave system. Most southern Jews defended slavery, and some went further, advocating its expansion.

Notable among these was Judah P. Benjamin, labeled by the abolitionist Ben Wade, who served with Benjamin in the U.S. Senate, as “an Israelite with Egyptian principles.” Even in the North, many sympathized with the South and only a very few were abolitionists. Almost all Jews sought peace above all else. Until the war was at hand, they remained silent on the subject.

For me, that silence is problematic.

As Arnie, in Nathan Englander’s short story “Camp Sundown,” puts it: “The turning away of the head is the same as turning the knife.” Yet the majority of American Jews were mute on the subject, perhaps because they dreaded its tremendous corrosive power. Prior to 1861, there are virtually no instances of rabbinical sermons on slavery, probably due to fear that the controversy would trigger a sectional conflict in which Jewish families would be arrayed on opposite sides. And that is exactly what happened.

Ironically, the silence was breached by an attempt to forestall the conflict. With Lincoln’s election and the gathering momentum of the secession movement, the celebrated New York Rabbi Morris Raphall attempted to make a case for reconciliation by defending slavery on biblical grounds. The speech had the opposite effect, triggering furious rebuttals from Rabbi David Einhorn and biblical scholar Michael Heilprin, among others, and widening the growing divide. Jews had at last engaged in numbers with the great issue of the age.

When the war broke out, Jews did by and large attach themselves to their sections and to the causes of their sections, even at the risk of great suffering, painful separation from loved ones, grievous injury, horrific death, and as foretold, dividing families and pitting brothers against each other.

“Passages Through the Fire” is filled with such stories. What emerges from them is the heartfelt, touching, personal language in which they are told, often by people whose English is newly learned.

Their words reveal the pride, pain, and ardor of these remarkable people, who were willing to put so much on the line. Whether in combat, in other forms of service to the war effort, on the home front or in a host of other roles, their passion is unmistakable. And, of course, the war transformed them, their place in America, and, in ways we are still struggling to understand, America itself.

Although few Jews, like other Americans, opposed slavery at the war’s outset, many came to feel that the suffering of the war needed to be about something important: the end of slavery and the creation of a different America. The experience of Jews in New York City is indicative of this process in some ways. By far America’s largest Jewish community, New York’s Jews were overwhelmingly pro-southern, pro-slavery, and anti-Lincoln in the early years of the war. Increasingly, however, as both the toll of the war and the North’s military victories mounted, feelings began to shift toward “Father Abraham,” his party, the Union and eventually, emancipation. Close to 2,000 Jews from New York State joined the Union forces.

As historian Howard Rock sums up, “The war was a transformative moment for Jews’ understanding of American democracy.” The decision by Jews’ Hospital — later Mt. Sinai — to care for all sick and wounded soldiers and sailors was emblematic of the Jewish community’s expanded civic commitment. By war’s end, a number of Jews became leaders in advancing the cause of civil liberties. “Father Abraham” became a hero to most Jews. The Jewish Cult of Lincoln, which had many Old Testament overtones — Lincoln died on the first night of Passover, for instance, and the first eulogies were delivered from synagogue pulpits — would persist for decades.

The outcome of the nation’s great existential crisis made possible the open and most welcoming society Jews had ever encountered, what one of my cousins (in a not-uncommon Yiddish phrase) called “Golden America.”

The Jews caught up in that crisis were transformed by it and, in turn, helped transform the America that emerged from it. Yet relatively few Jews are aware of this, an amnesia that constitutes a deep loss. The history of the Civil War has long been bitterly contested. Perhaps as with the contest over slavery itself, it would be helpful if more Jews were engaged in it. American Jews have a stake in this history, and their experience over the last 150 years makes a lot more sense if viewed through its lens.

Ken Yellis, principal of Project Development Services, served as guest curator for “Passages through the Fire: Jews and the Civil War.” A historian with four decades in the museum field, Yellis has been involved in over 100 history, science and art exhibitions.