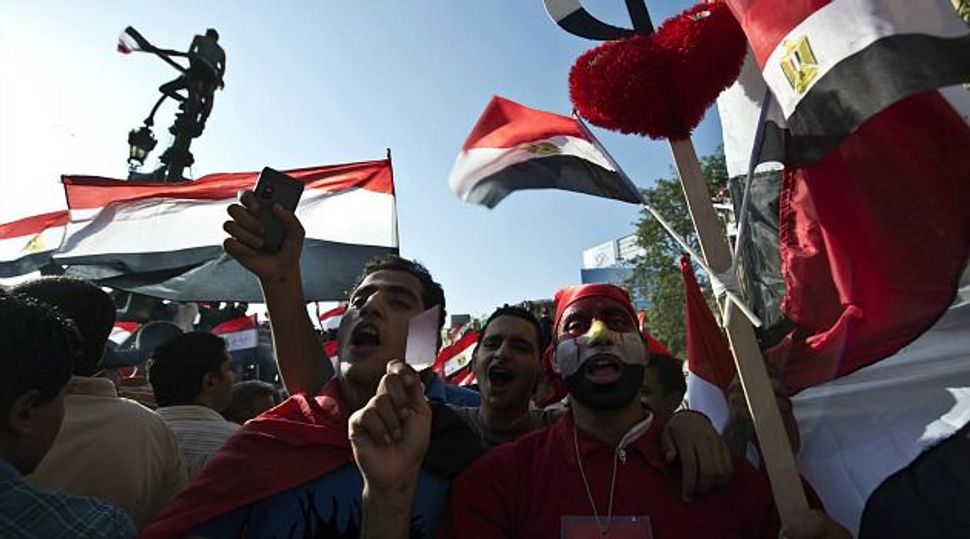 An American Jew in Cairo: Living as a Jew in Egypt?s capital comes with its challenges but also moments of incredible bonding with others. Image by Getty Images

The writer prefers to write anonymously because of the political situation in Egypt.

I never knew him personally, but it seems I’ve lived a life quite like Andrew Pochter, the 21-year old Jewish American tragically killed in Alexandria, Egypt on Friday.

“He went to Egypt because he cared profoundly about the Middle East, and he planned to live and work there in the pursuit of peace and understanding,” a family statement read.

Here in Cairo there is a network of us Jews who, like myself, came to Egypt with a similar mindset. Just last week I met another “Member of the Tribe,” as we call them. He’d spent time, too, in ‘Disney Land’, our local code for Egypt’s neighbor across the Sinai.

Last September we held a tashlich service of sorts on the Nile. We went out on one of Cairo’s popular felluca boats and symbolically tossed Egypt’s legendary brown baladi bread — the kind they riot about when subsidy cuts are threatened — into the muddied Nile water. Shabbat potlucks followed with friends of all faiths and makeshift vegetarian cholent. We chanted kiddush over Egypt’s infamously mediocre Omar Khayam red wine. For Passover we gathered and broke matzo with some of the last Jews of Egypt. It was a night I could never have imagined.

Being a Jew in Cairo is not easy, but you make of it what you want. It is not a life of silence, but for me the insecurity comes because there are no clear lines about what is right and wrong. The Cairo congestion combined with a steady dose of rumors has a way of numbing reflexes.

Walking in the streets I’m an obvious foreigner. “What’s your nationality?” men at kiosks are quick to ask. In the Middle East I’ve come to know it is not uncommon to be asked your religion at the start of a conversation. In a way, it is like an American asking “What do you do?” It is a means for people to try to place you as a foreigner within a framework that they now. But sometimes when I’m close to losing it with a cat-caller in the streets, I cynically wonder to myself, ‘Would you still want me now if you knew I was Jewish?’

In over a year in Egypt and five years exploring the Middle East I have received less than a handful of hateful responses when disclosing my religion — though I also do so cautiously. When I tell Egyptian friends or acquaintances that I’m Jewish, they often say, “You know, we have no problem with Jews. We are all brothers and sisters.” Some add one caveat, “The problem, you see, is just with Israel.” Soon after, another, “You know, you really shouldn’t tell most people that.”

I know I’m not alone in having lied and said I’m Christian. Sometimes I truly felt uncomfortable about my interlocutor’s intention. “You’re not an Israeli or Jew are you?” a poor bookseller once asked in Cairo’s Azbakeya book market as I handed him the money. “Because we’re enemies.” I needed the book for class the next day, muttered a panicked no, and simply bolted away. Later I laughed with friends about this encounter, marveling at how pervasive conspiracy theories had come under decades of autocratic rule. As if I was an Israeli spy, and was going to find the secrets to Egypt’s demise in that used copy of the revered Taha Hussein’s autobiography.

“The problem is that those people just don’t think,” Egyptian friends, themselves well educated, respond when I tell them these kinds of stories. “Not all Egyptians are like that.”

Other times I simply do not want the burden of being the token Jew. I do not want to worry whether every move I make will be weighed against generations of stereotypes about the mythical religion and people that in that moment I manifest. It’s the more selfish approach, I know, and perhaps unfair of me to presume. But Cairo’s paranoia is a powerful force.

Then there are the times I prefer to retell the countless encounters with Egyptian friends or professional contacts that keep me staying here. Most friends knew me as just an American before my religion came up in conversation. And I don’t think much has changed since. If anything, I feel closer now to those with whom I can freely share the traditions, stories, and ideas from my upbringing that were such a formidable part in shaping how I see the world today. I like, too, to hear their reactions about how they perceive these parts of the life I lived.

The other day another American and I met a new Egyptian friend for dinner in Imbaba, a poorer area of Cairo where she lives. We ate at one of Cairo’s most famous meat restaurants — and I dined on my vegetarian favorites of babaganouj and garlic pickled eggplant. She was, like most Egyptians, appalled. “What?” she demanded. “Why are you vegetarian?” I provided my usual response, “In America I do not agree with how we produce our meat for environmental and ethical reasons.” I elaborated a bit. And then I added the part I do not always share. “And I grew up with certain food restrictions because of my religion. In my family, we only eat certain meat. It’s called kosher, like Muslims and Halal.”

In yet another only-in-Egypt moment, she was enthralled to learn I was Jewish. “I’ve never actually met a Jew before!” she exclaimed, clasping my hand. I smiled and told her that Egyptians often questionably say when the subject of Jews comes up, “Well I know lots of Jews…” We then launched into one of my favorite kinds of conversations — and discussed different food practices amongst various religions.

After dinner we went back to her family apartment on a quiet side street removed from the Imbaba crowds. They never used to lock the building door, she told me, until after the revolution. We drank juice with her mother and sister, and then watched some of President Morsi’s speech together. They are religious people and openly expressed their criticism. “He mixes religion and politics in a bad way,” her mother lamented, waving her hand in disgust at the small television set.

Less than a week later I heard about Andrew’s death while at a dinner at a friend’s apartment, just two metro stops from Tahrir Square. I was the only Jew that night in a mix of Americans and Egyptian gay men, often disproportionately represented in ex-pat circles. Conversation turned to the recent DOMA decision, and one of the gay Egyptians asked, “Wait, do you all know we are gay?” I laughed. It was clear to me from the start. But the incident reminded me once again of a simple fact — everyone has parts of them that at times they feel they cannot share. A degree of alienation is innate to the human condition. I am by no means alone in Egypt.

A few months back I stopped indulging strangers’ questions about my religion. I have my values, I tell them when asked whether I’m Christian or Muslim. “And that’s the most important thing, right?” “Yes, yes,” they always agree. I decided to do so in response to an online campaign started by Egyptians to have religion removed from their identity card. It seemed like a new way to keep an old conversation going.

I wonder what I’ll say, if I’m still around these parts, 10 years from now. For I know I am here in a particular moment of transformation for Egypt. Into what, I cannot speculate. But I know it was not and will not always be this way. There were more tolerant times, and this makes me hopeful that history will repeat these parts again.

Jews once lived openly amongst Egyptian Muslims and Christian Copts in a time before the wars — 1948, 1956, 1967, and 1973 — that became defining moments for the modern Egyptian state. In the years that followed Jew became aligned with Israeli and Zionist that for complicated reasons — both real and imagined — become popular to fear, and even hate. Now I find myself, like many of my Egyptian, American, Jewish, Muslim, and Israeli counterparts, trying to make something new of these changing times.

No one story can capture it all, but that’s not a reason not to share them.