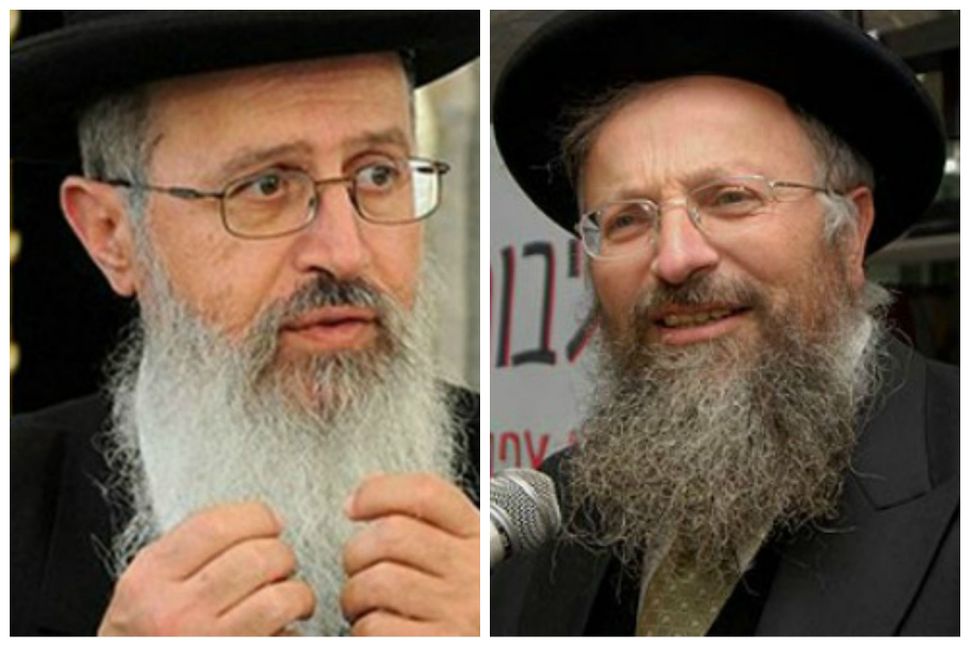 The leading candidate for Sephardic chief rabbi is now Rabbi Shmuel Eliyahu, chief rabbi of Safed and son of the late Mordechai Eliyahu, former chief rabbi and longtime spiritual mentor of the National Religious Party. The younger Eliyahu is currently the subject of furious behind-the-scenes politicking by liberals who want to stop his candidacy, led by Justice Minister Tzipi Livni and Labor Party lawmaker Eitan Cabel. The reason: a long record of extreme racism, including his notorious 2010 dictum forbidding the sale or rental of homes to Arabs.

Livni, whose Justice Ministry would be in charge of Chief Rabbi Eliyahu (since the Sephardic chief rabbi is the head of the rabbinical court system, which is under the Justice Ministry), met with Attorney General Yehuda Weinstein last month to look for legal ways to block Eliyahu. Weinstein was dubious about the legal grounds, according to Nahum Barnea in today’s Yediot Ahronot. Barnea quoted Livni as insisting: “This is intolerable. After all, we’re talking about the position of chief rabbi. What will his election do to Israel’s image abroad? He mustn’t be elected.”

Livni wanted to base legal action on an indictment issued against Eliyahu in 2002 on charges of racism after he called for the expulsion of the Arab population of Safed. Weinstein pointed out that the state attorney’s office dropped the charges in 2006 after Eliyahu agreed to apologize, which would undermine the legal grounds for blocking him now.

On Wednesday, however (presumably after Barnea had filed his Friday Supplement column), Haaretz reported that Weinstein had agreed to conduct a legal inquiry if Eliyahu’s name is formally put in nomination.

The Haaretz story linked above includes some of Eliyahu’s most controversial quotes. The Israel Religious Action Center of Reform Judaism has put together a longer list of Eliyahu’s most objectionable public statements.

Barnea points out, however, that stopping Eliyahu could be a mixed blessing. His main competition, Barnea reports, is Rabbi Avraham Yosef, a son of the former Sephardic chief rabbi and current Shas party mentor Ovadia Yosef. Though less prominent in the press, Barnea says, Yosef could be considered even more racist—and misogynistic and anti-democratic, to boot—than Eliyahu. In part this is a reflection of their ideological backgrounds: Eliyahu comes from the religious Zionist movement and recognizes the legitimacy of the state and its institutions, while Yosef emerges from a Haredi worldview that’s much more ambivalent on the question. It’s said, though, that Avraham Yosef is considered something of an extremist even within his own family.

To make his case, Barnea put together a list of parallel statements by the two for comparison. Here’s my translation:

Following is a series of quotes from their writings. Quotes of Rabbi Eliyahu were collected with the help of Rabbi Gilad Kariv and Gadi Gvaryahu from “Tag Meir.” The response of Rabbi Yosef were collected from his anthology of response.

On renting apartments to non-Jews

Eliyahu (at a conference in Safed with [former Kach activist] Baruch Marzel, 2010): “If someone rents an apartment to Arabs, this is against halacha. It is permitted by law, I have been to the state attorney’s office. They charged me with racism. Nobody will shut my mouth.”

Yosef: “It is forbidden to rent apartments to gentiles, it is forbidden to sell land to them. Question: Immigrants from Russia came to me, totally secular. They seemed like honest people. I don’t know about their Jewishness. Should I rent to them? Answer: In principle the law permits it, but if it is clear that they are not Jewish it is forbidden.”

Yosef: “It is forbidden to buy olive oil from a gentile.”

Eliyahu (Arutz Sheva, 2002): “It is forbidden to sit quietly. We must throw all the Arab students out of Safed College. I say this explicitly—I don’t fear anyone.”

Eliyahu (Questions and Responsa): “It would be worthwhile for someone to come and organize the consumers not to use the services of a hotel that employs Arabs workers. If they attend to the cleanliness of the food the way they attend to the cleanliness of their villages—the condition of the food is difficult … The time has come to speak the truth: Giving employment to enemies brings harsh results.”

Eliyahu (Questions and Responsa): “You must shout ‘Danger, terrorist’ and aim your weapon at him. By his reaction you can know whether he is a terrorist. One who comes to kill you, even if it is uncertain—hasten to kill him.”

Eliyahu (The Land of Israel Is Ours, 1998): God told us to exact revenge on the gentiles. It was He who brought Pharaoh and his troops to the Red Sea in order to drown them. Not to bring Israel out of Egypt, but to exact revenge.”

On the Supreme Court and the judicial system:

Yosef (Radio Kol Chai, 2010): “Judges cannot be counted in a minyan. It is forbidden to give to them, engage them or include them in any synagogue statement. Ignore their existence, and they will be as empty air. Even if the judge knows how to pray very well, from the moment that he was appointed a judge he disqualified himself from participating in a minyan, not to mention a prayer leader. He has raised a hand against the Torah of Moses.”

Eliyahu (Radio Galei Yisrael, 2010): “This is the most racist court in the state. There is no presence of Sephardim.” (To Galei Tzahal): “Who is the Supreme Court? They will not run the state for us. We will create disturbances so the court will fear us.” (To nrg.com/Maariv online): “For some reason this court is called by the names supreme, high and justice. The lives of soldiers are important in my eyes, but the justices are less important than the lives of gentiles.”

Yosef (Questions and Responses, 2008): “Is it permissible to elect a woman mayor? The question is one of halacha. A. Whether it is permissible for a woman to be elected to public office. B. Whether it would help in the observance of religion locally. To the best of my knowledge, the woman in Herzliya [Mayor Yael German] does not meet either of the two criteria.”

Yosef: “It is forbidden to involve a woman in the zimun [the opening of Birkat Hamazon, the blessing after meals], even if it is for her husband or son. It is forbidden for a woman to cover herself with a shawl. A woman is meant to wear clothes like everyone else wears.”

On democracy and the media:

Eliyahu (With a Jewish Head, 1998): “A revolution is needed. The entire nation is ruled by a very narrow stratum.”

Eliyahu (With a Jewish Head, 1998): “People who don’t believe in God sit over the communications media and don’t permit anyone who thinks differently to broadcast.”

Friday’s Haaretz has a story by Yair Ettinger reporting that a religious-Zionist website has taken down some comments made by Eliyahu in 2005, railing against the Gaza disengagement, that could further damage his candidacy.

The text attributed to Eliyahu urged revenge against secular Jews, calling on people to bring secular children back into the religious fold. The Kipa website (in Hebrew) first published the comments during the disengagement from the Gaza Strip in 2005. A spokesman says the rabbi’s quotes have been taken out of context.

Ahead of the nomination of a new chief rabbi, his alleged 2005 response was extracted by the information dissemination website 61 – run by Molad, the Center for the Renewal of Israeli Democracy, an organization associated with the left.

Eliyahu’s answer was in response to a question by a woman whose friend “had a lot of pent-up anger” after the withdrawal from Gaza. She wanted to know “how to channel his anger in a positive direction.”

The Rabbi of Safed reportedly replied: “Take revenge! Avenge the secularists who have brought this disaster upon us. Avenge the evil associated with this folly. Return them to the bosom of religion, talk incessantly. Restore them and their children to the faith. Do this wisely, with sensitivity and determination.” Shortly after these words appeared on Facebook and Twitter this week, they were removed from Kipa, with no explanation given.