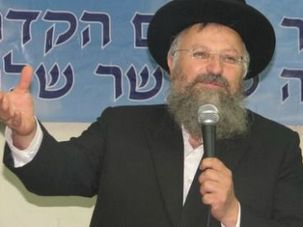 It’s been a week since the devastating fire in Northern Israel began, and already we have self-appointed experts telling us the “message” of the blaze. The latest theory is that it’s meant to focus people on… the campaign to free Jonathan Pollard.

Rabbi Eliyahu on a Woman's Place

There seems no end to the stream of astounding stories out of Israel relating to the official rabbinate there.