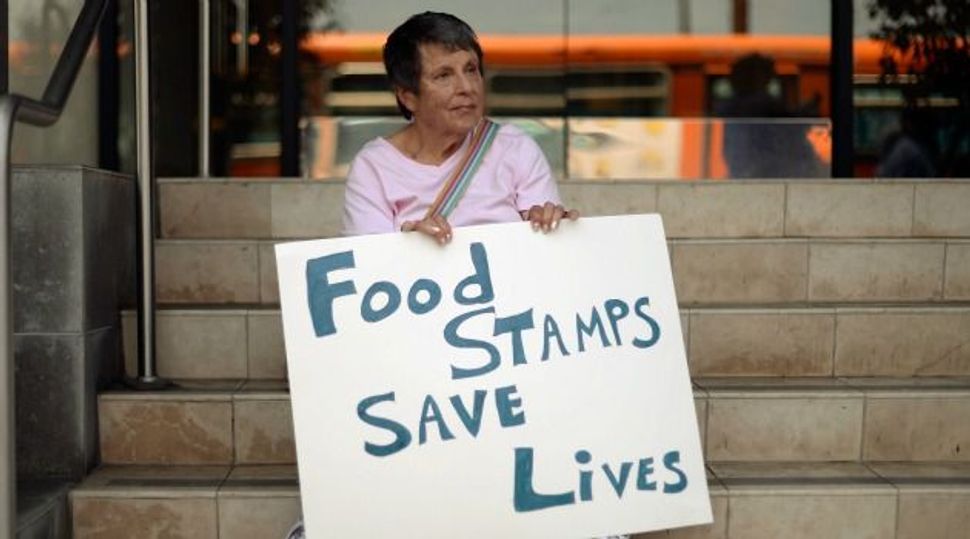 Context: Some years back – in 1986, to be precise – there was a day called “Hands Across America,” an effort to create a living line from Los Angeles to New York (minus, if memory serves, the Rockies). The purpose was to raise money to do battle against hunger. Nearly 7,000,000 people participated and the effort was rated a huge success, raising a sum far beyond the organizers’ expectations — $93 million in all.

To understand just what $93 million can do, if all those dollars had been used to buy three meals a day for all food-insecure people in the United States, the effort would have been out of money in three days.

That, presumably, is why Congress in its wisdom (you’ll rarely find “Congress” and “wisdom” in the same sentence these days) has over the years funded food stamps, or, as it is now called, SNAP (Supplemental Nutrition Assistance Program). Some may think SNAP a gift to the shiftless, the ne’er do wells of our nation – but when you consider that the average benefit under SNAP is $4.50 a day, you realize that it is hardly an overly generous subsidy. Indeed, that is why the word “Supplemental” is part of the program’s name; no one believes that people can really have their nutritional needs satisfied by $4.50 d day. And poor people, often without easy transportation, often distant from full-service super-markets, are especially hurt.

Still, SNAP until now has provided something of a safety net. It’s not a lot, but it’s not nothing. And it has enjoyed bipartisan support – again, until now. SNAP and its food stamp predecessor have been, for the last 40 years, part of the comprehensive farm bill, a “must pass” bill, and have thereby enjoyed a modicum of insulation.

Not any more. On July 11, the House stripped SNAP from the farm bill. So now SNAP will come up as stand-alone legislation, and the question that’s being asked in Washington is how big a hit will be imposed upon it – this notwithstanding a January Institute of Medicine National Research Council report that described the inadequacy of SNAP benefits for most people struggling with hunger. In fact, the relevant House committees did not hold a single hearing on SNAP, an example of what must be regarded as willful ignorance.

Have you noticed price increases I food in recent months? So have the SNAP managers – but it takes them 16 months to adjust the SNAP allotments – by which time new increases are likely to have been introduced.

In calculating net income, hence elegibility, there are no deductions permitted for out-of-pocket medical costs for nonelderly, nondisabled SNAP participants. One of my favorites people in the world is Dr. Deborah Frank, a pediatrician (and one of my favorite people in the world), who founded and is principal investigator of Children’s HealthWatch, an organization analyzes the effects of economic conditions and public policy on young children seeking care in emergency rooms and clinics around the country. Commenting on the fact that out-of pocket healthcare costs are not taken into consideration in calculating the net income of non-elderly and non-disabled SNAP participants, she observes that “Parents with children with special healthcare needs are less able to work many hours and have higher out-of-pocket healthcare related expenses. That means they are at particularly high risk of food, energy and housing insecurity, so there is a reciprocal relationship between children’s poor health and poor nutrition.”

SNAP may not be – is not – as generous in its allotments as some of us wish it were, but when University of California at Davis economist Hilary Hoynes and her colleagues looked at adults born between 1956 and 1981 “who grew up in disadvantaged families (their parents had less than a high school education)”, and the impact of access to food stamps early in life, they found that “access to food stamps in utero and in early childhood leads to significant reductions in metabolic syndrome conditions (obesity, high blood pressure, heart disease and diabetes) in adulthood and, for women, increases in economic self-sufficiency (increases in educational attainment, earnings, and income, and decreases in welfare participation).”

And yet here we are, teetering on the edge of cutting $21 billion from a SNAP program that is assisting one in seven Americans; it’s a cut that would remove 2 million people from the program and cause more than 200,000 low-income children to lose access to school meals. Even the Democratic-led Senate is proposing a $4 billion cut, which the Congressional Budget Office estimates will result in 500,000 households losing $90 per month in SNAP benefits.

But the poor and the hungry are mostly out of sight, hence out of mind. Remember the detailed discussion of hunger and poverty in the Obama/Romney campaign? No, you don’t, because there was no such discussion. The word “poverty” was, as best I recall, mentioned twice, and very much in passing, in all the debates and all the speeches of the candidates.

“Let all who are hungry enter and eat,” we say at Passover time. Let’s keep SNAP in mind the next time we recite those words.