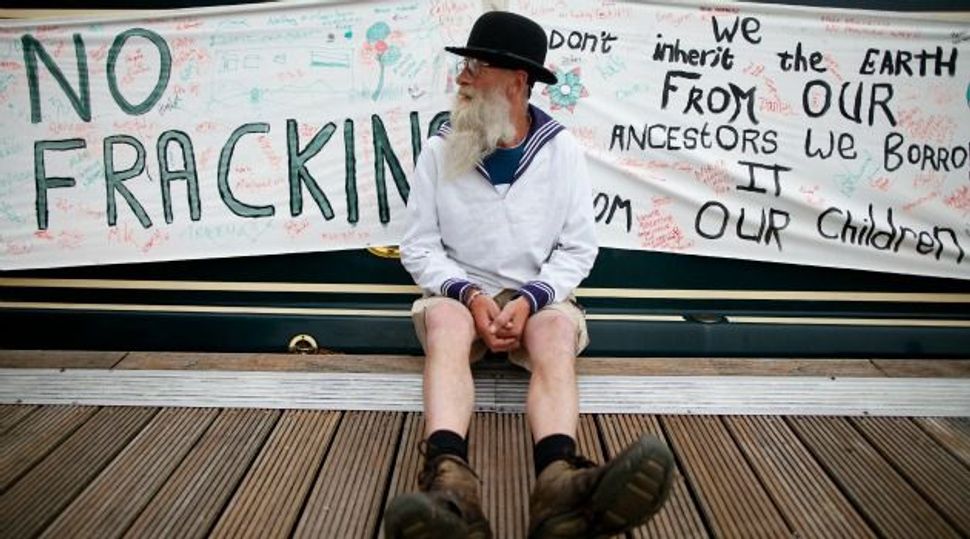 Out of the Ground: Fracking takes water out of circulation, depriving the earth of a central resource. That?s a spiritual, as well as a political, concern. Image by Getty Images

Every year, more than 100 billion gallons of water are used in the United States for hydraulic fracturing or “fracking,” a process that breaks up rock in order to force out millions of cubic feet of natural gas.

What people may not realize is that most of this water stays deep underground. The 20%–50% of water that comes back up to the surface (“flowback water”) is full of toxins that can’t be removed by normal water treatment, and the fracking industry is still struggling to figure out how to handle it. As for the water that remains below, it needs to stay far beneath even the deepest aquifers, away from the water we use for drinking and for agriculture, because otherwise it would poison them.

It’s not like when you use a gallon of water to take a shower or flush the toilet, where the water can be treated and put back into circulation, or like when a farmer uses a gallon to grow tomatoes, where the water returns to the natural cycle even more quickly. Most of the water used in fracking is permanently withdrawn from the cycle of life.

Other extractive industries also employ huge amounts of water. But fracking is unique, because the many billions of gallons of water involved are being used up, taken out of the cycle that would have seen them flow through the earth’s streams and seas and atmosphere as part of the life-blood of this planet, for potentially millions of years What does it mean to lose that water, essentially forever? According to Kabbalah, it could be considered a sin against the water itself.

The way the natural world is imagined in Kabbalah, its elements are yearning, longing, to be raised higher and higher into consciousness, into the process of life and love. This can happen whenever a more sentient life form like a human being takes in a more basic substance (like when we drink water or eat plants), and it happens through the process of evolution itself, where life comes from the elements and develops greater and greater capacities for connection and awareness.

In Kabbalah, the very symbol of blessing and life — of chesed (or “lovingkindness”) — is water. If we take these ideas seriously, then the water that stays in that fracked rock is deprived of fulfilling its deepest purpose.

By conventional environmental ethics, one should be thankful if most of the water stays far below ground. That’s because the blend of poison mixed into that water by the fracking company (to make it flow easily yet be dense enough to fissure rock), combined with the radioactive elements, heavy metals, hydrocarbons and concentrated salts it absorbs deep in the earth, makes it lethal and extremely difficult to treat.

Most of the protests against fracking focus on the fear that methane and fracking solution will seep, uncontrolled, up to the surface and into our groundwater or aquifers.

Separate from the potential poisoning of our water supply, withdrawing millions of gallons of water from an ecosystem, river or well can cause terrific damage in and of itself — all the more so in drought-ravaged areas of the West and Midwest, where so much fracking takes place. Deep injection of fracking waste can also cause earthquakes because it lubricates faults. And we don’t know whether fracking fluid and natural gas will come up through old abandoned wells that intersect with fractured rock.

It would already make a huge difference if the fracking companies were charged for the “cradle to grave” use of these billions of gallons of water, including the cost of the predictable truck spills and the technology to treat the flowback water that doesn’t spill. But we can go further than that in our accounting, because so much of that water is being removed for good.

Let’s be very conservative and say that there are 100,000 times that this water could be used by the biosphere and gone in one shot. How much does a gallon of water times 100,000 cost? More than a cubic foot of gas? Actually, more than 50,000 cubic feet of gas.

This magnification of the value of water is no exaggeration; if anything, the price is far too low. In 100 years, the people who are alive will look back in horror to think of how we wasted and ruined our precious water resources in order to bring more and more poison up to the surface of this very good and beautiful planet.

For science and ecology, as well as for Kabbalah, water is the very substance of life. So shall we take this gallon of water, brought here in this planet’s early childhood by comets of ice — this gallon that has passed through the forms of sky and cloud and ocean for billions of years, and even cycled through cytoplasm and breath, sap and blood — and remove it forever, for all practical purposes, from life’s cycle?

You see, even if we didn’t worry about tap water catching fire, or about thousands of acres of land taken over by wells and collection pits and truck roads, or about all the escaped methane driven into the atmosphere (where it will accelerate global climate disruption 20 times more powerfully than carbon dioxide) — even without these things, fracking, and the attitude behind fracking, would still be a danger to the well-being of the planet.

Ban? Moratorium? If people want to stop fracking, if municipalities and citizens want to take control of their land from rapacious companies and know-nothing state governments, then let’s charge the companies for what our precious water is really worth.

David Seidenberg is a rabbi and the creator of the website neohasid.org. His first book, on ecology and Kabbalah, will be coming out this year.