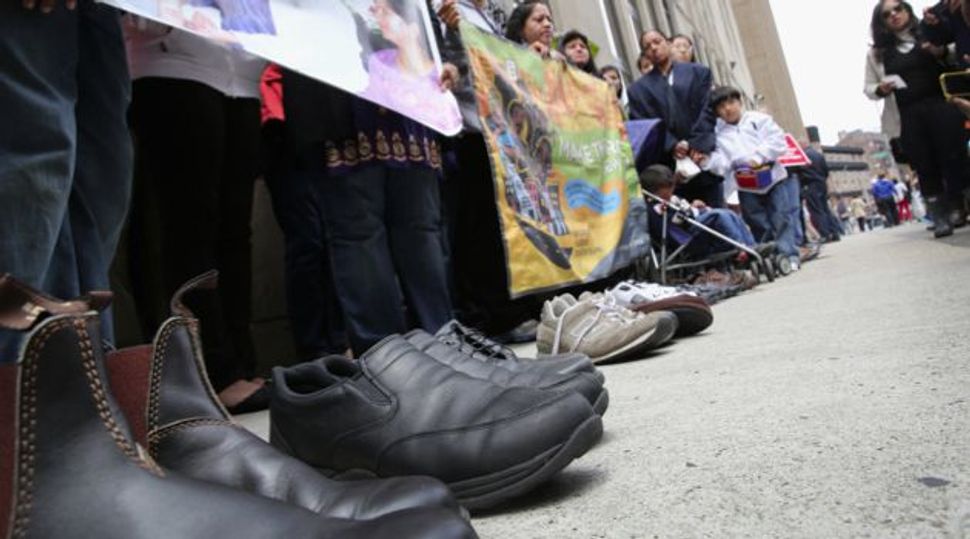 Gone: Shoes symbolizing deported fathers are displayed during a demonstration, organized by the New York Immigration Coalition, outside a detention facility run by Immigration and Customs Enforcement on June 14. Image by Getty Images

I sat in a tent in the desert and waited for travelers to arrive. They came on government buses, dehydrated, exhausted, covered in blisters and bug bites. We welcomed them into our large, white tent and offered bandages, water and clumsily wrapped burritos. Abraham welcomed three strangers into his desert tent. Each day, I welcomed hundreds of deported immigrants apprehended by U.S. Border Patrol in the Sonora Desert and sent back over the border to Mexico.

As I crouched in a tent in Nogales, Mexico, I bore witness to stories of displacement, violence and state-sponsored cruelty against immigrants. A 19-year-old undocumented college student caught in an immigration raid and now forced back to Mexico for the first time since he was 3 years old. A 6-year-old in a party dress and her five-months pregnant mother, who had been wandering in the desert for two weeks before finding themselves staring into the barrel of a Border Patrol agent’s gun. A desperate father who spent a year detained in solitary confinement in a California prison before being separated indefinitely from his family members, who remain in the United States.

I left my summer of volunteering on the border with the words of Rabbi Abraham Joshua Heschel printed on my heart: “… morally speaking, there is no limit to the concern one must feel for the suffering of human beings, that indifference to evil is worse than evil itself, that in a free society, some are guilty, but all are responsible.”

It is this sentiment that has inspired me now to engage in a 40-day fast, joining others in my community in Philadelphia who are part of the New Sanctuary Movement, a group fighting for immigration justice where I work as a community organizer. Specifically we are fasting for a more inclusive federal immigration reform than the one now being considered in Congress. For one thing, this current draft ignores the plight of the deported.

Our country is at a critical moment for immigration rights. The Senate recently passed S.744, an immigration reform bill long championed by pro-immigrant organizations like the New Sanctuary Movement. But while the Senate bill includes some positive measures, like providing legal status for roughly 8.5 million of the 11 million undocumented immigrants in the United States, it also includes provisions that violate the Jewish value of treating each life with dignity and respect.

The Corker-Hoeven Amendment adds $46 billion to further militarize the border, doubles the number of Border Patrol officers and uses high-tech surveillance such as drones to monitor border crossing. The pathway to citizenship offered by S.744 would take each prospective citizen at least 13 years and thousands of dollars, and prevents an estimated 3.5 million to 5 million undocumented immigrants from accessing citizenship because of strict requirements like disqualifying families who fall below 125% of the poverty line. Imagine if our Jewish predecessors were met with similar requirements when coming to America a century ago.

The Senate bill also does not address the 2 million people deported under the Obama administration via local policies that empower police departments like Philadelphia’s to collaborate with Immigration and Customs Enforcement in deporting immigrants out of our cities. Mass deportation results in the separation of families, community trauma and the violation of civil rights. As we work at the federal level, we must also work locally to end mass deportation policies.

What if our ancestors had fled oppression in the land of Egypt and crossed the parted Red Sea to find 700 miles of fencing, armed Border Patrol guards and drones monitoring the hike up Mount Sinai? What if we had reached the Land of Milk and Honey and were forced into abusive working conditions and our families were torn apart by the deportation of 1,100 people each day?

I fast in memory of Jews who have fled persecution and found themselves strangers in a strange land. I fast in solidarity with immigrants separated indefinitely from their families. I fast to live out the Torah’s command to build a beloved community that welcomes all strangers. When our interfaith community breaks the 40-day fast on July 31, we commit ourselves to continue organizing for humane immigration policies because God is reflected in all of us, regardless of immigration status.

Nicole Kligerman is a community organizer at New Sanctuary Movement of Philadelphia.