The American Jewish Way of Death 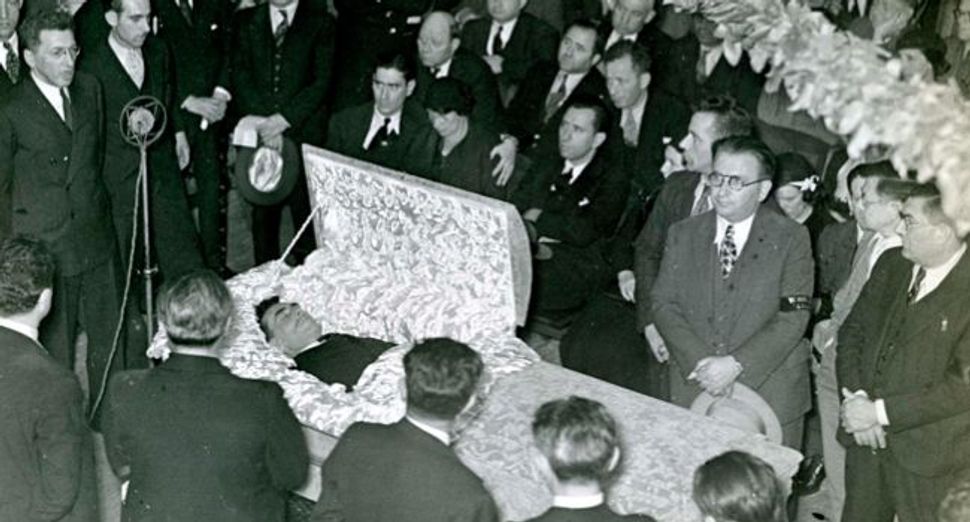 Open Casket: The body of Benjamin Schlesinger, a onetime managing editor of the Forward, is displayed in the lobby of the Forward building in 1932. Image by Forward Association

In August 1963, “The American Way of Death” by Jessica Mitford sold out its first printing on its publication date and topped The New York Times best-seller list for weeks.

Inspired by her husband, Robert Treuhaft, a radical Jewish labor lawyer who was an unnamed co-author of the book, Mitford brought a sparkling British wit to her investigation of the American funeral industry. She focused on such practices as embalming bodies for viewing in ornate, expensive caskets, demonstrating how funeral industry profits had become dependent on these items — and on the inducement of bereaved families, at their most vulnerable, to pay for them.

Mitford’s (and Treuhaft’s) book struck a responsive chord among millions of Americans, prompted new Federal Trade Commission regulations and gave a significant boost to what is known as the funeral consumer movement.

Fifty years later, what can we learn from “The American Way of Death” as we consider our current Jewish choices for responding to life’s final chapter? How have funeral consumer issues been influenced by both religious and secular Jews, and how has the Forward itself figured in the mix?

“At first, burial of the dead was for their relatives more difficult than their death [because of the expense], to the point at which relatives would leave their dead and flee,” as the Talmud describes it. The rabbis decreed that the faces of all deceased should be covered, and that all should be brought out on a plain bier — “for the honor of the poor.” One prominent rabbi left instructions that he be buried in the least expensive shrouds, which also became the ritual standard for centuries.

Notwithstanding these and related reforms for simplicity and equality in death, what evolved as the chevra kadisha, the sacred burial fellowship, was rejected by growing numbers of Jews from the Emancipation onward, along with other institutional forms of traditional Judaism.

“Of all the changes modernity wrought — in the way Jews remember, record, sing, talk, work, dress, and educate their young — the last and most stubborn holdout of tradition is the way they bury their dead,” cultural historian and Yiddish scholar David Roskies wrote in “The Jewish Search for a Usable Past.” “The surest sign, then, of an irrevocable break with the past was when Jewish burials began to ape those of the Gentiles.”

In his essay “A Revolution Set in Stone: The Art of Burial,” Roskies described how this trend developed among Jewish socialists and other secular activists during the years of peak immigration to the United States, and observed: “During the interwar years, the Jewish labor movement continued to rally the masses around its dead leaders with a secular rite commensurate with its radical ideology: The exposed body lay in state in an open coffin in the Forward Building the entire day prior to the funeral, under the protection of ‘red’ honor guards….”

The irony of this description is striking in hindsight. Turning their backs on the chevra kadisha, Jewish radicals also jettisoned funeral reforms instituted “for the honor of the poor.” Discarding religious tradition, the Jewish labor movement unwittingly bolstered the capitalist foundations of the American funeral industry: embalming bodies for viewing in expensive coffins.

Decades later, entrenched excesses along these lines would spur labor lawyer Treuhaft into action — first organizing the Bay Area Funeral Society, and later donating a year from his law practice to research what would become “The American Way of Death.”

The same year the book was published, local groups like Treuhaft’s from across North America formed what is known today as the Funeral Consumers Alliance. The national FCA and its local affiliates engage in education, citizen activism and legislative monitoring; many affiliates enter into discount arrangements with local funeral homes.

The “green” or “natural” burial movement has subsequently emerged to restore an ecological perspective to funeral choices, echoing pre-rabbinic biblical language: “… for you are dust, and to dust you shall return.” Funeral consumer and natural burial advocates share concerns about embalming, which increases funeral pricing and introduces toxins for workers and the earth. Similarly, more expensive veneered wood and metal coffins are not biodegradable.

Until recently, funeral consumer groups have tended to promote cremation as a less expensive alternative. With growing awareness of the fossil fuel depletion, air pollution, global warming and other environmental costs of cremation, the activist heirs of Mitford and Treuhaft have modulated their message.

In “Final Rights: Reclaiming the American Way of Death,” FCA leaders Joshua Slocum and Lisa Carlson conclude: “In its simplest form, green burial is by far the most environmentally sound method of disposition. It is… a process that was, after all, predominant for the millennia leading up to the last century, and for very good reasons due for a comeback.”

In the mid-1970s, spurred by broader developments following Mitford’s book, a Conservative synagogue in Minneapolis set out to reclaim the “green burial” of talmudic values. Taking a page from Mitford and Treuhaft while declining their less sustainable conclusions, Rabbi Arnold Goodman and his lay leadership at Adath Jeshurun Congregation turned to their local funeral consumer group to find a cooperating funeral home for their chevra kadisha.

Goodman’s book “A Plain Pine Box,” originally published in 1981, is about reintegrating the fuller spectrum of Jewish caring community development, from visiting the sick through consoling the bereaved. Notwithstanding its focus on burial rather than cremation, it is recommended by many nonsectarian FCA groups as a model corrective to the excesses documented by Mitford. Unfortunately, most Jewish community leaders today have never read it or applied its wisdom.

Sustainability, simplicity, equality and community are values that have helped Jews face death for thousands of years. Learning from all of our Jewish “usable past” — religious and secular — can help us recover and reintegrate those values.

Rabbi Regina Sandler-Phillips is the director of Ways of Peace Community Resources and an end-of-life sustainability advocate in Brooklyn, NY.

The American Jewish Way of Death