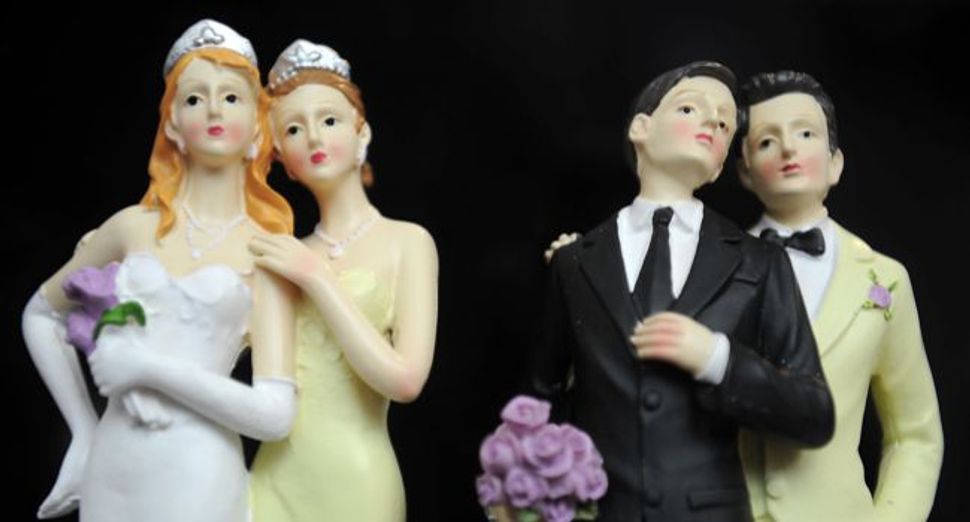 Hitched: The increasing acceptability of same-sex marriage has been largely embraced by American Jewry. Image by Getty Images

Nothing creates controversy and polarization in the United States more than discussing same-sex marriage, and nothing brings the anxieties of American Jewry to the surface more than discussions of intermarriage. Both of these issues have gotten some attention in the American Jewish world over the past few weeks. And in the process, they have raised some questions about the changing nature of Jewish and American discourse regarding marriage.

David Wolpe, one of America’s most influential rabbis, anticipating the recent Supreme Court decision to strike down the Defense of Marriage Act, announced to Sinai Temple in Los Angeles, one of the West Coast’s premier Conservative synagogues, that he intends to perform same-sex marriage ceremonies. This would not normally be newsworthy, since the Conservative movement has permitted its rabbis to perform same-sex ceremonies for several years, but the announcement met with significant backlash from more traditional congregants, some of whom left the synagogue in a huff.

This happened right after Ellen Lippmann, a Brooklyn Reform rabbi, publicly challenged her movement to change its current policy and to accept rabbinical students who have non-Jewish spouses, leaving other leading Reform rabbis to declare that even having such a debate demonstrates that Reform Jews may be on the verge of not believing anything anymore.

At one level, same-sex marriage and intermarriage present the same problem. Both seem uncontroversial if you assume that the moral center is located in the consciences of consenting adults. Marriage can and should be between any two people who want to be married to each other for exactly as long as they want to be married to each other. Do what you want in your bedroom, and keep the rest of society out of it. But neither same-sex marriage nor intermarriage makes much sense to someone who sees marriage as deeply connected to communities and their age-old traditions.

The new ethics of marriage aren’t all that different from liberal America’s attitudes toward religion, sometimes cynically referred to as “a mile wide and an inch deep.” You have your preferences, and I have mine, but far be it from me to tell you how to celebrate or worship. Both marriage and religion are viewed as personal matters, choices that an individual makes for numerous alternatives, all of which are basically okay. At this point, if you are under the age of 40 and are not already committed to some traditional religion, you can’t figure out why anybody would begin to oppose same-sex marriage. Let the jointly filed tax returns rain down like manna.

By the same logic, there should be no moral opposition to marriage between a Jew and a non-Jew who love each other, care for each other and see a future together. Might different backgrounds, holidays or beliefs impinge on the couple’s harmony? “Sure,” people tell themselves, “but a good marriage is always built on compromise, and with a positive attitude we can figure it out, just like we’ll figure out what to do when you can only sleep with the window open and I want it closed.”

Much of the American Jewish conversation drifts away from how to prevent intermarriage and toward how to bring intermarried families into the community, not only because intermarried Jews are still Jews or because this helps boost membership numbers, but also because it’s hard to muster much moral indignation against a loving, caring couple whose differing religious convictions are an accident of birth.

But the two issues are not entirely the same. As Wolpe pointed out in a class he taught to his congregation as the controversy was erupting, rejecting same-sex Jewish marriage means condemning a Jewishly committed gay person to a life of loneliness, while rejecting intermarriage merely asks the Jew to find a different partner.

But there are other issues at stake as well. A Jewish same-sex family can provide a boon for the Jewish community, while an interfaith couple presents a threat, or at least a challenge.

As technology has enabled same-sex couples to bring children into the world, and as adoption becomes so thoroughly accepted, any Jewish couple with children is a low-hanging fruit for synagogue staff concerned about Jewish vitality, community involvement and membership numbers. If the same-sex marriage debate represents the lesbian, gay, bisexual and transgender community adopting at least some middle-class suburban domestic values, and if American synagogues depend on middle-class suburban families with children for their membership, gay and lesbian couples and American synagogues seem like a match made in heaven.

But the majority of intermarried couples do not raise their children as Jews and, even among those who do, their levels of Jewish identity and practice are lower than in-married couples. If synagogues and Jewish communities want to attract intermarried families, they have an uphill climb that will depend on a huge investment in outreach work. Even with that effort, the odds of an intermarried family’s grandchildren having a strong Jewish identity remain low.