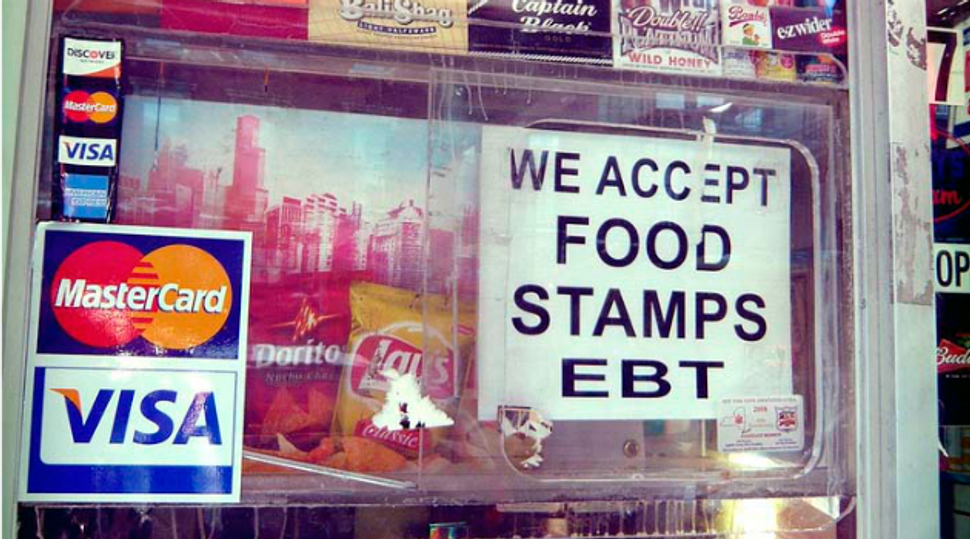 “Eat Mexicans.” That’s Stephen Colbert’s advice to people who will be tossed aside when Congress finally gets around to overhauling the food stamp program.

The solution proposed by the House Republican leadership is only slightly less macabre than Colbert’s — and, unfortunately, it is serious, as we may assume Colbert’s advice is not. The plan? To double the cuts in the Supplemental Nutrition Assistance Program, or SNAP as it’s known, dropping up to 4 million poor people. And as if that were not enough, the plan will also reduce benefits, ending up with less than $1.40 per person per meal.

Robert Greenstein, founder and president of the Center on Budget and Policy Priorities, calls the proposed cutbacks “stunningly harsh.” It may be surprising— and should be shocking — to learn that 47 million Americans currently receive benefits under SNAP. And all the good work of not-for-profit anti-hunger agencies and organizations, from New York City’s Metropolitan Council on Jewish Poverty to the organization I founded, Mazon: A Jewish Response to Hunger, cannot begin to solve the problem. Since its inception in 1985, Mazon has disbursed some $80 million to food banks, soup kitchens and, critically important, advocacy organizations. But Mazon and its sister organizations can alleviate hunger for only a fraction of those for whom food insecurity is a chronic condition. After all, the not-for-profits that do battle with hunger spend many millions a year in their efforts, but the federal government puts many billions into the effort. And even so, its allocations are inadequate to the task.

Back in 1986, Hands Across America created a human chain reaching from New York City to Long Beach, Calif., a chain that included nuns in Pittsburgh holding hands with members of the Hell’s Angels, and in New Mexico, ranchers who lined up cattle horn-to-hoof to fill in for missing humans. It was a day of great excitement, and the fact that more than 6 million people joined in buoyed us all. But in the end, Hands was a spectacular failure, raising less than $20 million. Use all that to feed every food-insecure American three meals a day, and after just one day you’re out of money. In fact, it takes roughly $31 million to feed all hungry Americans three meals a day. One day.

It is against that background that we must evaluate the proposals for SNAP now floating about the House. Just about all the attention is focused on how large the cuts to SNAP should be; the fight in the House in September will be between those who want a $40 billion cut over the next decade and those who, in an effort to hold the fort, are insisting that the cuts be closer to the $4 billion being considered by the Senate.

I’ve written about SNAP before, and I expect I will have to again; the problem of food insecurity, more familiarly known as hunger, is not going to go away anytime soon. But of all the holes in the safety net that America provides its neediest citizens, none is quite as poignant — and outrageous — as our failure to ensure adequate nutrition for all our residents. It is outrageous because no other modern industrialized society comes close to failing as badly, and because there is more than enough food to provide for all. America is a huge and powerful country. If there’s a drought in one place, there’s an abundance of water somewhere else; if there’s a drought everywhere, there are ships that can bring food to our shores. And, many of the beneficiaries of SNAP are children — 22 million of them — who live in food-insecure households. That’s more than merely sad, more even than outrageous. A mountain of data shows that the life chances of young children who experience food insecurity are constricted. Even were there not a compelling moral case to be made, there’s a straightforward economic case: We end up raising children who will be less productive, far less productive, than they would be were the cold hand of hunger not strangling them.

Myself, I’m thrilled that because Mazon exists, some number of Americans can sleep without interruption by hunger’s pangs. But “some number” is so much smaller than it should be, than it can be. I am delighted that for many people, contributing to Mazon has become a ritual, and that a good number of Jewish youngsters learn about hunger early on and are prompted to engage in its alleviation. I remain sick at heart that we permit — because that’s what it comes down to — hunger to cannibalize us. It’s not a joke about eating Mexicans that worries me; it is that we are taking huge bites out of our own children.