How Education Can Combat Israeli Racism 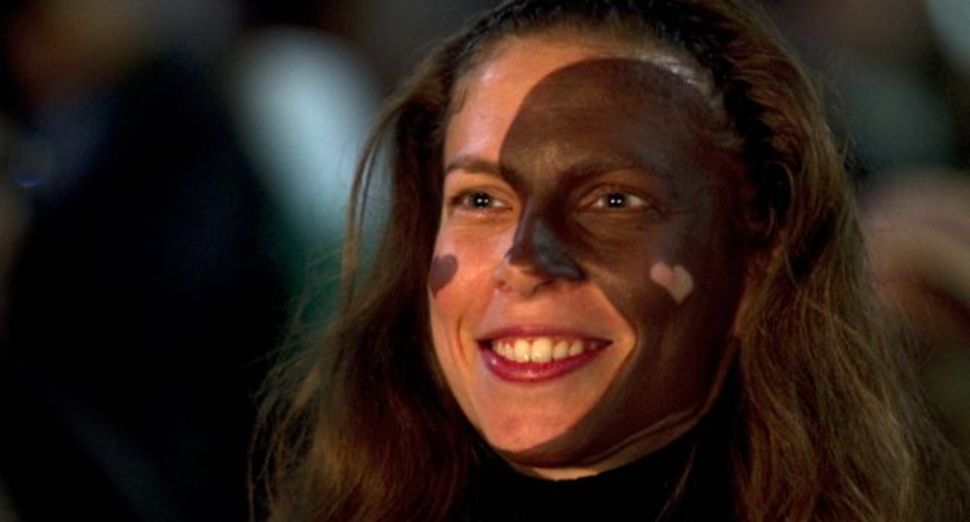 Hate?s a Crime: A demonstrator in Tel Aviv paints her face black and white to protest racism. Image by getty images

Please resist the urge to stop reading this article as soon as a certain word rears its ugly head. This is not an indictment. On the contrary — it’s a letter of commendation, a borderline puff piece. But the good news only makes sense in the context of the bad news, and I don’t know about your families, but in mine, we always started with the bad news.

So here it is: if you’ve been reading these pages over the past months, you know that racism in Israel is on the rise. Whether measured by individual incidents of violence or discrimination, public attitudes as reflected in surveys, or statements of key public figures, there is an undeniable uptick in ethnic discrimination in Israel. The victims of this rising racism include every national and ethnic minority group present in Israel today: Arabs, African asylum-seekers, migrant workers from Asia, Jews of Ethiopian origin, Jews and non-Jews from the former Soviet states, and even the Franciscan order of monks.

Although discrimination on the basis of race, religion, ethnicity, nationality or country of origin, is explicitly illegal in Israel, ethnic interpretation of the state’s Jewish definition opens the door to institutional discrimination against the country’s Arab minority and legitimization of a separateness that permeates much of Israeli society. This separateness’s inherent inequality is evident in laws and policies that give preference to Jews or disenfranchise Arabs. When new towns are built for the express purpose of increasing Jewish presence in certain areas of the country (sometimes even on lands confiscated from Arab Bedouin who are accused without irony of “squatting” since before Israel’s creation), the message to Israeli society is clear: We are not all equal.

But aside from ethnocentricity, might there be another, more self-evident, reason for the high degree of racism in Israel? Could it have something to do with the impact of the ongoing Arab-Jewish conflict on both the Jewish majority and the Arab minority, especially given that Israel’s Arab citizens are also part of the Palestinian people? Progressive Jews and Arabs typically shy away from such assertions, however obvious they may seem. But according to a new generation of Israeli educators, direct confrontation is an essential tool in a new strategy for combating the racist attitudes of youth in Israel. This strategy, which acknowledges racism’s emotional components and relationship to fear, might be Israel’s best shot at rooting out the plague.

Earlier this year, educators explored the difficulties that the educational system faces in addressing racism and examined different means for meeting future challenges at a first-of-its-kind conference in Tel Aviv. Highlighting the educational system’s duty to combat racism in Israeli society, the conference focused on two novel approaches. The first involves the pedagogical use of actual incidents of intolerance within the classroom’s social dynamics (if and when such incidents arise). The second calls for the integration of anti-racism education into general studies curricula (history, art, science, etc).

Teachers in Israel report that racist or otherwise discriminatory incidents in Israeli classrooms are commonplace. Such incidents are typically handled on a case-by-case basis, often guided first and foremost by the teachers’ understandable interest in maintaining control of the classroom and advancing with their lesson plans. But Sharaf Hassan, director of the Association for Civil Rights in Israel’s education department, says that with the proper training and approach, these incidents are invaluable opportunities for educators to instill the value of tolerance in their students.

In a live classroom environment, this means that when a student calls a classmate a “homo,” rather than just disciplining the offending child for acting out, an educator can use the incident as a catalyst for a discussion about why the term is offensive, especially when used as a general pejorative put-down. Having prepared for such an opportunity in the past, the teacher seizes the moment while the drama is still fresh in the students’ consciousness, and uses the incident as a launching-off point for a wider discussion about tolerance that the students can relate to in an immediate sense.

The second new approach that educators are advancing in Israel schools is the holistic cross-discipline integration of anti-racism education into every subject from history to physical education. It is similar to the first approach in that it avoids treating anti-racism education as a special topic to be discussed once or twice during the year and then forgotten. Beginning a typical biology lesson on modern genetics with a discussion on antiquated theories of racial science and eugenics creates an implicit connection in students’ minds between racism and such thoroughly debunked concepts.

Unfortunately, these approaches have yet to be fully adopted and assimilated by the Ministry of Education. Until that happens, most educators will lack the necessary training to address instances of racism in their classrooms and incorporate democratic values of tolerance into their subjects. The Israeli teachers’ conference was the latest step in a long-term, bottom-up effort to mainstream the adoption of anti-racist education into the educational system. Even though Israel’s Declaration of Independence guarantees freedom and equal rights to all of its inhabitants, the reality of life in Israel today sends youth a very different message. A new generation of educators, prepared to meet this reality head on, is Israel’s best bet to inspire a new message that aspires to an equal and tolerant society for all.

Marc Grey is the international press liaison at the Association for Civil Rights in Israel.

How Education Can Combat Israeli Racism