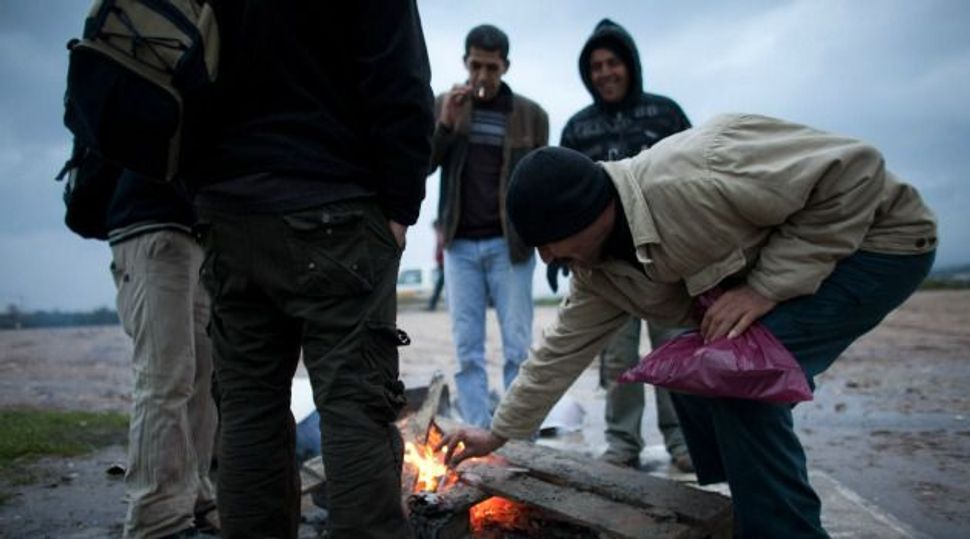 Long Wait: Palestinian workers wait to cross into Israel at a checkpoint. Easing restrictions on movement could be a big step to peace, and could benefit Israel, too. Image by getty images

If Israeli and Palestinian negotiators want early agreement on a critical component of a peace deal, they should start by immediately and significantly expanding access between the West Bank and Gaza.

I can’t think of a more important — and more easily resolved — issue than securing a connection between the two parts of the territory designated to form a Palestinian state. For the past two decades, movement into and out of Gaza has been steadily restricted. Passage between Gaza and the West Bank is permitted under exceptional humanitarian circumstances only, and travel is down to just 1% of its level in September 2000. Goods are allowed to enter Gaza, but transferring goods outside, to Gaza’s traditional markets in Israel and the West Bank, is banned. As a result, families are separated, the economy is choked, and the social and cultural ties that bind Palestinians in Gaza and the West Bank are strained to the point of breaking.

Since 2007, the Palestinian factional split has exacerbated this state of affairs. Palestinian institutions are now divided, too, and Israel has tightened restrictions on Gaza even further, in response to its takeover by the Hamas regime.

The good news is that, in contrast to thornier issues in the negotiations, such as settlements and the return of Palestinian refugees, consensus about Gaza-West Bank territorial integrity has already been established in principle. Israel’s rationale behind closing Gaza — weakening the Hamas regime and punishing people in Gaza for the acts of militant groups firing rockets — has been discredited, morally and tactically. Israeli officials, including Prime Minister Benjamin Netanyahu, have acknowledged that restrictions on civilian access into and out of Gaza tarnished Israel’s reputation abroad and made it more difficult to justify restrictions that Israel’s military really does believe are necessary for security.

Experts in security and economics note that the policy of restricting goods entering Gaza and paralyzing the economy only strengthened dependence on the Hamas regime, which became a rare source of jobs and welfare assistance and turned the tunnel trade into a lucrative source of tax revenues.

In fact, even in the current political climate, increases in access have slowly begun to take place, demonstrating that it’s possible and that more can be done. Over the past month, Israel has permitted a 30% increase in travel of individuals between Gaza, Israel and the West Bank, apparently in response to more restricted travel on the Gaza-Egypt border.

Following Egypt’s crackdown on tunnel activity, Gaza residents purchased 40% more goods in July via the Kerem Shalom crossing with Israel. A screening mechanism at Kerem Shalom is already in place for outgoing goods, meaning that the ban on the sale of goods to Israel and the West Bank from Gaza could be reversed today.

Israel only stands to gain by opening up Gaza-West Bank access and allowing a renewal of the familial, cultural, economic and educational links that foster well-being and stability. Such action would show the international community that Israel is sincere in its promise to facilitate conditions on the ground to create a Palestinian state.

Palestinians have only to gain by being able to access both parts of the Palestinian territory. Each month, through a submission process mediated by the Palestinian Authority, Palestinians in Gaza and the West Bank flood Israel with tens of thousands of requests to travel, most of which are refused. The Palestinian people want access, and more can be done today to facilitate that access.

Engagement in resolving the problem of Gaza access would also be a productive role for the American administration struggling to formulate a response to the ousting of Egyptian President Mohamed Morsi and the subsequent crackdown on travel and trade along the Egypt-Gaza border. It is an area where American and Egyptian interests are clearly aligned: Both support a two-state solution to the Israeli-Palestinian conflict; both view the Fatah-led P.A. as the official Palestinian interlocutor, and, most important, both view Gaza as an integral part of a Palestinian state, together with the West Bank. Egypt is especially worried about Gaza being severed from the West Bank and about responsibility for access being pushed onto Egypt.

Israel has legitimate security concerns. Regional arrangements to expand civilian access both via Israeli- and Egyptian-controlled crossing points can strengthen Israel’s ability to undertake necessary security measures and enhance its ability to screen people and goods. That screening could continue to take place, as it does today, via coordination with the P.A.. that is permitted by Hamas — a quiet area of de facto cooperation.

No issue in the Israeli-Palestinian conflict is simple. But respecting the right of Palestinians in Gaza to travel and transfer goods, subject to individual security screenings, would lend credibility to the peace negotiations by effecting real and positive changes on the ground that further the interests of all parties.

Sari Bashi is the executive director of Gisha, an Israeli human rights organization protecting the right to freedom of movement in the occupied Palestinian territory.