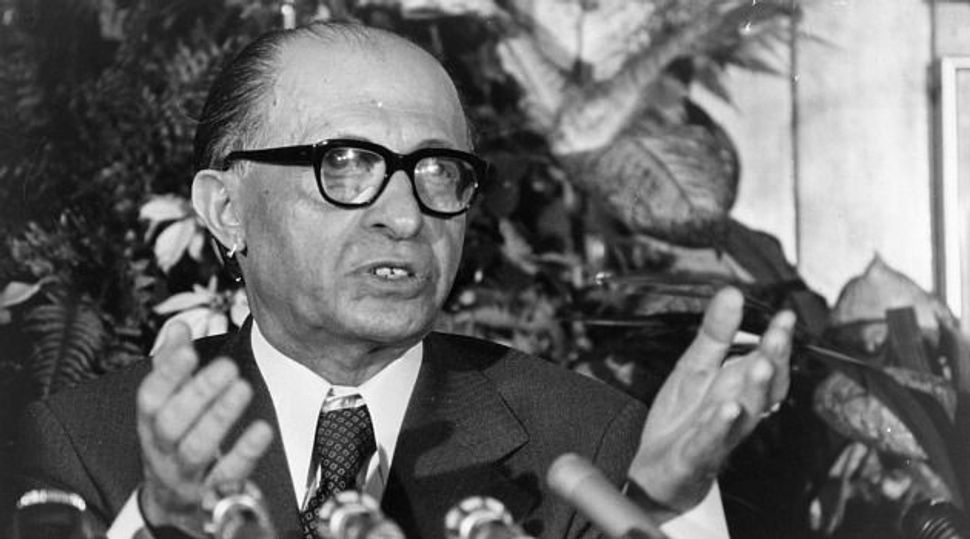 No Subtlety: Menachem Begin made no apologies for what he saw as his firm stand for Israel and the Jewish people. Like him or hate him, he was an open book. Image by getty images

On a day in June 1977, in a Knesset buzzing with excitement — every seat taken, senior officials cramming reserved sections, and the galleries packed with ambassadors and other dignitaries — Menachem Begin, a picture of confidence and robustness, mounted the podium to present his newly elected government for parliamentary approval. He dryly outlined the democratic processes that led to the changing of the guard from Labor to Likud for the first time in Israel’s history, and then, with mounting passion, delivered the most ideological speech on the Jewish right to the whole of the Land of Israel the Knesset had ever heard.

“There are those who question our right to our ancient homeland, and even our right to exist within its sacred boundaries.” he said contemptuously. “How dare they? Would it enter the mind of any Briton or Frenchman, Belgian or Dutchman, Hungarian or Bulgarian, Russian or American to request recognition of its right to exist? Their existence per se is their right to exist!”

He paused to make a Norman arch out of the tips of his fingers as if to collect himself, and then, in thunderous peroration, declared: “Let the world know that we were granted our right to exist by the God of our fathers at the glimmer of the dawn of human civilization 4,000 years ago. The Jewish people have a historic, eternal and inalienable right to the whole of the land of our forefathers. And for that right, which has been sanctified in Jewish blood from generation to generation, we have paid a price unprecedented in the annals of nations.” He pronounced these last words with the fervor of a patriarch, causing some of his disciples to jump to their feet in irrepressible ovation.

There was this something about Menachem Begin, who would have turned 100 on Aug. 16, that aroused mighty and conflicting passions. Admirers adored him irrationally, and detractors loathed him irrationally. He was so iron-cored that he was neutral in nothing.

All his predecessors had been illustrious, pioneering, Zionist socialist, secular diehards, while he perceived himself as a liberal democrat, very much in the mold of a Jewish traditionalist of the old school, with an infectious common touch that made Jews everywhere feel they really mattered. This goes some way in explaining why many still recall his name with affection — that and the peace he forged with Egypt, the largest and most powerful of all the Arab states.

A good many of his critics had branded him a war monger, chief among them President Carter. He never did like Begin, and it was only much later that Begin realized the innate prejudices that Carter harbored toward Israel. It was Begin, however, at Camp David in 1978, who, rising to the heights of Nobel Prize statesmanship, negotiated accords from which the peace treaty eventually emerged. To make it happen, Begin conceded the whole of the Sinai Peninsula (now a tinderbox of Islamic militants) and dismantled all its Jewish settlements there.

But there was nothing concessionary about him when dealing with “the Jewish people’s inalienable rights to the whole of the biblical homeland.” Once asked by The New York Times if he intended to actually annex the West Bank, he curtly replied: “You annex foreign territories, not your own country whose territories have been liberated. A Jew has every right to settle in the liberated territories of our Jewish homeland.”

And he meant every word he said. Nowadays some 400,000 Jews dwell on the mountain tops and slopes of Judea and Samaria.

Is it any wonder, then, that skepticism trumps hope as the parties, Israeli and Palestinian, gather under the gaze of Secretary of State John Kerry to salvage a contiguous and viable Palestinian state from the demographic and geographic mishmash that Begin deliberately set out to create? To him, the creation of a Palestinian state would pose a mortal danger to the Jewish state.

“There is no going back to the ’67 lines,” he told Presidents Carter and Reagan. “It would be suicidal. No nation in our region can be rendered so vulnerable and hope to survive. No nation can live on borrowed time.”

Which is why he would be appalled at the current policy of his disciple, Prime Minister Benjamin Netanyahu, in acquiescing to a two-state solution. The furthest he was prepared to go was to grant the Palestinians autonomy, not sovereignty. “Peace for peace,” was his maxim, not “Land for peace.” And never, ever, would he negotiate with the Palestine Liberation Organization; it was his anathema. “Even if they declare they recognize Israel,” he said time and again, “I would not believe them. It would be a ruse to destroy us in phases.” So, in 1982 he pursued them into Lebanon to rid northern Israel of their rocket fire, but the cost in casualties became too high for the public to bear, and it all went sour on Washington and the rest of the world, and on him, too.

Thus it was that by the time he resigned from office, in 1983, he was but a shadow of his old self. Upon stepping down he made no public statement, no speech to the nation; he just walked away and disappeared into mysterious seclusion, a man of silence, distant and withdrawn, until his death nine years later.

World leaders readied to fly in to attend his funeral, but their governments were informed that, at the request of the deceased, the funeral was to be a traditional Jewish one: no lying in state, no military guard of honor, no official delegations, not even eulogies — just a shroud.

On the day, a dense throng of hundreds of thousands of mourners spilled into the streets in an unprecedented logjam of grief, the likes of which Jerusalem had never seen — of those who had loved him and those who had opposed him, the exalted and the humble. For much of his life Menachem Begin had been a figure of controversy, but he was buried with a nation’s veneration. Perhaps this was because he was possessed of that most elusive attribute of all true leadership — authenticity. Agree or disagree with the things he said and the things he did, everybody knew exactly who he was and what he stood for. Menachem Begin never wore a mask.

Yehuda Avner was a senior aide to Menachem Begin. He is the author of “The Prime Ministers: An Intimate Narrative of Israeli Leadership” (The Toby Press, 2010).