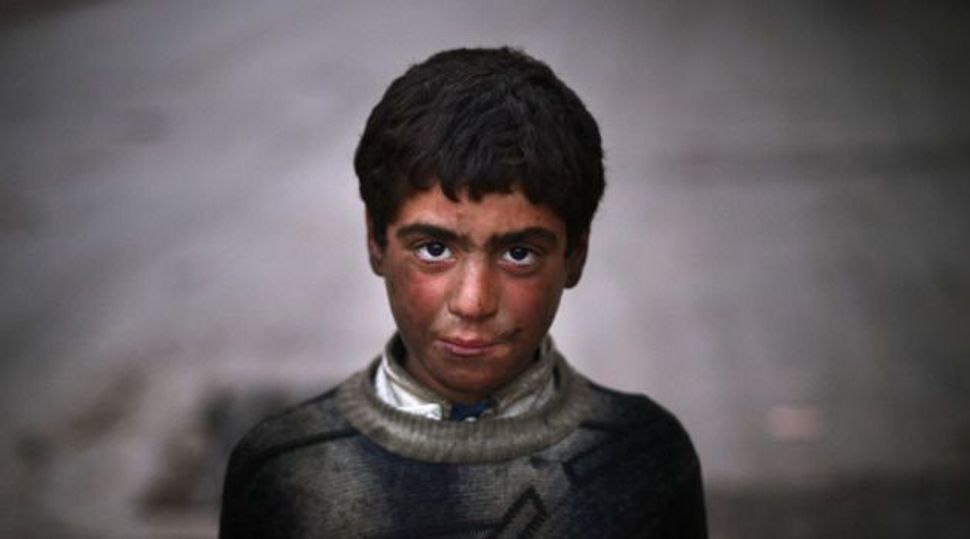 Hasbara Help: Israel has quietly helped a handful of injured Syrians cross the border and receive medical help. Critics scoff at the notion that the move is about anything more than winning positive headlines. Image by getty images

If you look at Israel and see only the occupation, any news in which Israelis come off positively is nothing but distraction, spin or — to use that vilified Israeli term — hasbara.

This is an understandable sort of cynicism, even for those of us who are not of the BDS left. After all, Israel itself does not hide the fact that it actively tries to change the subject whenever it can. Take pinkwashing, for example. It might be true that Tel Aviv is wonderfully welcoming to gays and lesbians while Gaza City is decidedly not, but when Israeli officials make this point again and again, it’s hard to see anything but an attempt at diversion.

But a recent story in The New York Times made me question whether I should so quickly indulge this impulse to search for the hidden hand of hasbara. The article looked at Israel’s efforts to help Syrians injured in their country’s civil war. The Israeli army smuggles these badly hurt civilians, including children, across the border, where they are delivered to Israeli hospitals and given medical care paid for by the state. It’s not a massive operation — the Times tallied up about 200 Syrians who have been treated in a handful of hospitals — but it has obviously been meaingful for those who were saved by Israeli hands.

In the article, Israelis appear as decent and selfless, willing to help even their sworn enemies. And the piece has all the touches that make it not just a very compelling human interest story, but also one that could leave you feeling warm and good inside about the Jewish state. There’s the Arab-Israeli doctor who confesses that he’s proud to be a citizen of a country that could treat every patient equally. Another doctor describes the “virtual hug” he offered a 13-year-old patient who found herself alone in Israel. And there’s the photo accompanying the story: an Israeli girl and a Syrian girl in wheelchairs, smiling at each other.

My friend Lisa Goldman, a prominent member of the Middle East commentariat, captured my own initial reaction in a Facebook post: “So the Government Press Office sends an email to journalists in Israel, telling them about this ‘quiet’ story of Israeli hospitals treating Syrian wounded. Shhh…. We want to be modest about this. So don’t make too much noise and please don’t reveal the identities of the people who benefit from our generosity, because their own people might shun or hurt them. Just for seeking help for their children. Can you imagine? And the media obediently report this story, because who can resist cute Jewish and Arab kids getting treated in the same hospital…. And then the foreign ministry sends links to the articles to all the journalists they have on their global email lists. And voila. That, ladies and gentlemen, is how you do hasbara.”

It’s a conclusion one can easily draw from reading the article and knowing a little something about how journalism works, especially if you’ve got a hard shell of cynicism — an attitude that journalists who have covered the region for a long time learn is the safe position to take. But this assumption also happens, in this case, to be untrue.

I contacted Isabel Kershner, the journalist who wrote the piece, and Jodi Rudoren, the Times Jerusalem bureau chief, and they both described a process in which the government did not want to cooperate on the story. Kershner had been trying to get access to Syrian patients for a few weeks, but the Israel Defense Forces kept blocking her way; the IDF was even reluctant to comment for the story until she made it clear that it was going to press. Only after she found a hospital in Nahariya, where children were being treated and were not under IDF guard, did she manage to report the story.

Beyond not rushing to easy judgment about the mechanics of how a story makes it to print — something Lisa was guilty of and I was complicit in before I sent off a few emails — there is a deeper lesson here.

Israel’s battle for its reputation has always taken place in the international media. For this reason, every article immediately becomes politicized, scored for its positive or negative impact. It’s why reporting from Israel can be such an incredibly fraught business. But I’m afraid that because hasbara is such a focus for the Israeli government, it taints the way we read news of what is happening there — and not just for the partisans on either side, but also for those of us standing at our cynical remove and trying to figure out who has been played.

As for the partisans, the responses to a story like this offer a textbook example of how predictably each side perceives a news story involving Israelis, even one so seemingly uncontroversial. A pro-Israel Twitter user linked to the story and asked, “Would you call this apartheid, too?!” And then a comment on Facebook, capturing the other side, characterized the spin of the story this way: “Look how civilized and generous we are and how barbaric they are….”

When I asked Lama Fakih, Human Rights Watch’s Beirut-based researcher on Lebanon and Syria, what she thought of the Israeli effort, what I got was probably closest to the un-spun version. The Israelis were providing badly needed services to these Syrians, and though the number of people being treated in Israel was not significant, “for those receiving assistance, the gesture is.” She also pointed out, as the Times article did, that Israel has made it abundantly clear that it does not want an influx of refugees into its borders, and that this medical help, however nice, needs to be understood in that context.

Rudoren offered a simple statement about news judgment on this politicized beat: “We don’t think of stories as pro-Israel. We think about whether they are a) interesting and b) important.” This doesn’t take into account how others will perceive the stories, but that shouldn’t be Rudoren’s problem. For us, readers, maybe it means putting aside the cynicism or the passionate partisan lenses every once in a while and appreciating that a story is worthy sometimes because it is, quite simply, interesting and important.

Gal Beckerman is the Forward’s opinion editor and writes a monthly column about the media. Contact him at [email protected] or on Twitter @galbeckerman.