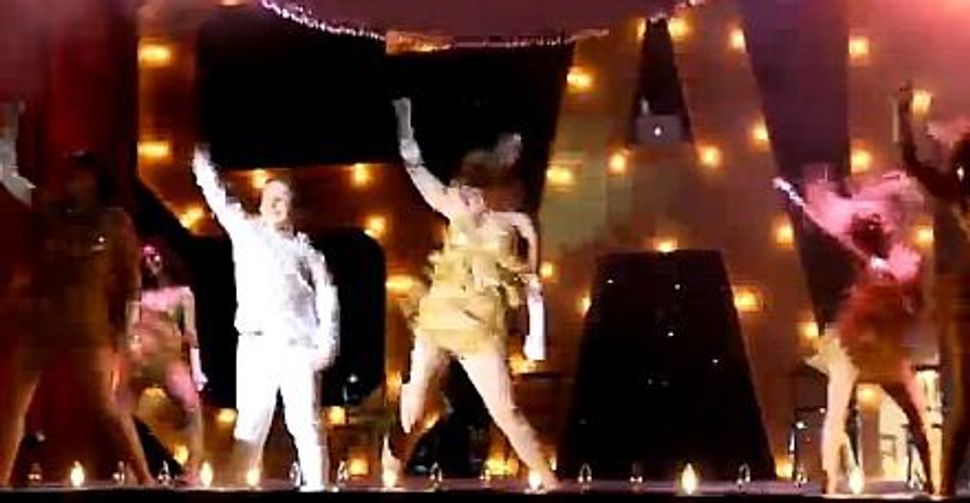 We should be commending this young man for celebrating his religious right-of-passage, not condemning. Many Jews don’t even celebrate their bar mitzvah. It is better to have a bar mitzvah, even with an over-the-top ostentatious celebration, then no bar mitzvah at all.

A bar mitzvah has two parts: the ceremony, which includes reading from the Torah and then the party. Many wrongly presumed Sam’s bar mitzvah was all a Vegas showgirl parade. As it turns out Sam’s bar mitzvah was more than just boogying with dancers to the lyrics of Jennifer Lopez – but included a religious ceremony that took Sam two years to prepare.

The 17th century Hasidic leader, Rabbi Levi Yitzchak of Berditchev, once observed a Jew greasing the wheels of his wagon while simultaneously praying with tallit (shawl) and tefillin (phylacteries). While others rebuked the Jew for denigrating the prayer, Rabbi Levi judged him favorably, and exclaimed: “God, look at how holy he is. He even greases the wheels of his buggy with tallit and tefillin on.”

To Sam we should exclaim: Look at how holy you are. Even with a showgirl parade, you still had a bar mitzva! You still spent two years preparing for it.

Sam told ABC News that the highlight was not the dancing but the services ceremony itself, not the well-choreographed dance routine. Allison Kaplan Sommer, in Haaretz, also reported that Sam had participants donate money to charity in lieu of giving him gifts, contributions which totaled $36,000.

If all bar mitzvah boys spent two years preparing for their Torah reading and fundraised $36,000 for charity, the Jewish community would be much stronger. Sam is a role model. I did far less for my Orthodox bar mitzvah.

It is true that the celebration did not need to include prancing girls in short skirts, nor the prohibitive cost associated with the spectacle, but that does not give people the right to denigrate. As a society we overspend on weddings, bar/bat mitzvahs, sweet 16 birthday parties, and other occasions. But how people spend their money is their business, and the extent of unwise splurging does not diminish the value of marking the occasion.

Alarming statistics from the American Religious Identification Survey (ARIS) indicate that the adult Jewish population identifying as practicing Jews declined from 3.1 million in 1990 to 2.6 million in 2008. How many of those 500,000+ non-identifying Jews hosted a bar/bat mitzvah for their children? Maybe Sam will inspire more to embrace their heritage.

Jews should be lamenting the fact that many don’t care enough, or know enough, to celebrate their bar mitzva — not criticizing those who do.