Forgive Us for Clicking on Sam Horowitz’s Bar Mitzvah Drama 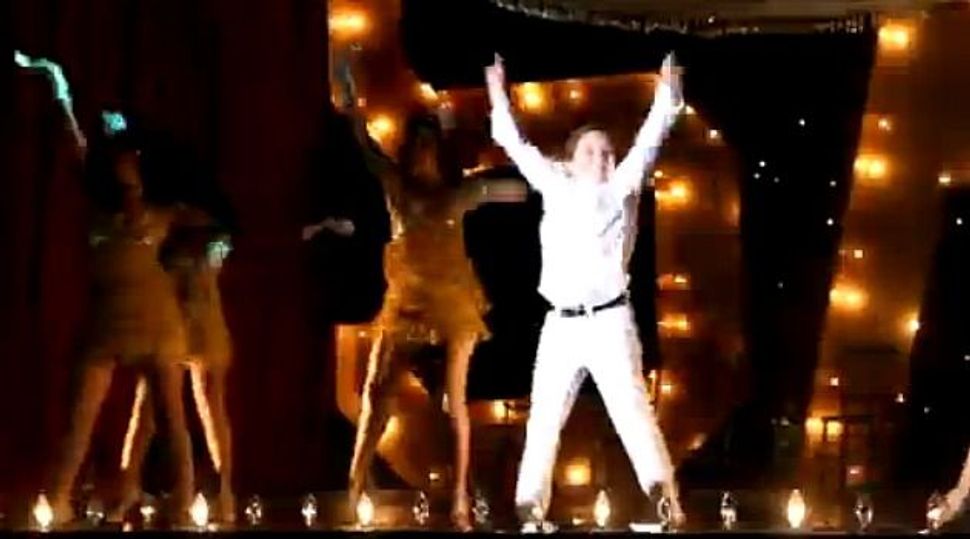 Proud Moment? Sam Horowitz may have enjoyed the 15 minutes of fame (or infamy) sparked by his gaudy bar mitzvah video. But truth be told, we all played a role in making it go viral. Image by youtube

The words of the Vidui are familiar to most Jews as being part of the Yom Kippur collective confessional. When we recite the Vidui, we all stand — as congregants, as people, as Jews — and confess to sins. These sins to which we confess are ones that we ourselves may or may not have committed. We make a collective confession, however, so that people who have actually committed these sins will feel less self-conscious about admitting their failings — and perhaps to own that we have each, in some small way, committed some fragment of the wrongdoing mentioned.

We have become desolate, we have betrayed, we have stolen, we have spoken duplicitously.

In some small part, I fear that I helped the now-infamous Sam Horowitz bar mitzvah video along on its path from innocuous to viral. I was sent the link by a friend, and promptly posted it to my Facebook page. Among my Facebook friends are social media gurus, television producers, journalists and both amateur and professional yentas. Like a hot potato, the video jumped from person to person, culminating in a “Good Morning America” interview.

Rabbi David Wolpe wrote an op-ed in The Washington Post in which, as a rabbi, he derided the ”egregious, licentious and thoroughly awful” video, which showed the young man dancing with scantily clad women in an elaborately choreographed extravaganza — and another later op-ed in which he apologized for anything he wrote which may have been hurtful to the boy and his family. Certainly there is an important discussion to be had about Jewish celebrations and the qualitative nature of those celebrations.

The avalanche of commentary on appropriate levels of expenditure and showiness associated with Jewish ritual was probably not what the family was looking for when they placed their bar mitzvah boy on a virtual world stage. Horowitz’s family is philanthropically active and is making a positive impact on the Jewish community in Dallas and in the world at large: The bar mitzvah raised, at the family’s request, more than $35k for a youth village in Israel. That being said, putting the video on YouTube — not password protected, not just for family viewings — invited comments.

It seems to me, though, that the video’s popularity says just as much about us, its viewers, as it does about the Horowitz family. Many were quick to judge the video and the spirit that motivated it. But this video’s popularity is actually nothing less than a window into the more salacious, tawdry and unfortunate parts of ourselves.

Rabbi Jesse Olitzky, in the context of a Facebook conversation on the topic, said: “We are the ones who made this video an Internet sensation. We are the ones that made it viral. We are the ones that use social media to talk about an individual (not a concept) — a young boy who just became a bar mitzvah. We are the ones who are in the wrong for publicly scorning, for publicly condemning. Humanity has an obsession with publicly criticizing one another. Social media has only encouraged such activity. Our faith teaches that public embarrassment is the equivalent of murder. Let us focus on Cheshbon Hanefesh [an accounting of the soul] in ourselves instead of being nit-picky about others.”

Ashamnu: Our failings are self-destructive. In embracing the idiotic, in celebrating the tawdry, in passing along such things with a fevered frenzy even if only to condemn them, we contribute to a culture in which we venerate the wrong things. This failing is self-destructive: In spending time on the idiocies so readily available on the Internet, we forfeit time that we could spend constructively using that social space to help our fellow Jews and fellow people.

Bagadnu: We have betrayed what is most essential about us as a people: not the impulse to judge one another, but the ability to act on behalf of one another’s interest.

In the same week that the to-do broke over the Horowitz bar mitzvah, one family in New York struggled to find the funds to pay for their baby son to have a bone marrow transplant to save his life. Idan Zablocki, a boy of not even 2, was born with an extremely rare immunodeficiency that, even his mother admits, untreated is nothing short of a death sentence. He has found a match for a bone marrow transplant, and while the best hospital for his particular procedure is in Seattle, the family’s insurance refuses to cover this treatment in full. Idan’s mother, Amanda Zablocki, has taken to the Internet and press to plea for financial help to save her son’s life.

This story, about a little Jewish boy whose life can literally be saved with financial help from the community, hasn’t gone as viral as a bar mitzvah spectacle in Dallas. Idan’s parents are not on “Good Morning America.” His mother’s story has not gotten as many links or hits (although it was written about in The Forward).

Have we fallen so far from our ideals that a mother should have to put on a Vegas showgirl outfit and do an elaborate dance routine to get our attention?

Gazalnu: We have stolen the conversation, the time, the effort and the social media energies that should have gone to better causes.

Dibarnu dofi: We have talked out of both sides of our mouths. We have judged others for what we deem to be showy spectacles, but in doing so we have failed to realize our own potential for doing good in the world. We have judged others freely, perhaps because in doing so, we implicitly absolve ourselves from the difficult, yet crucial, obligations of self-examination.

Each year, we confess. And each year, we are offered the opportunity to redeem ourselves.

Jordana Horn is the former New York bureau chief of The Jerusalem Post and is a contributing editor to the parenting website Kveller.com

Forgive Us for Clicking on Sam Horowitz’s Bar Mitzvah Drama