As Egypt Falls Apart, Israel Whispers: ‘We Told You So’ 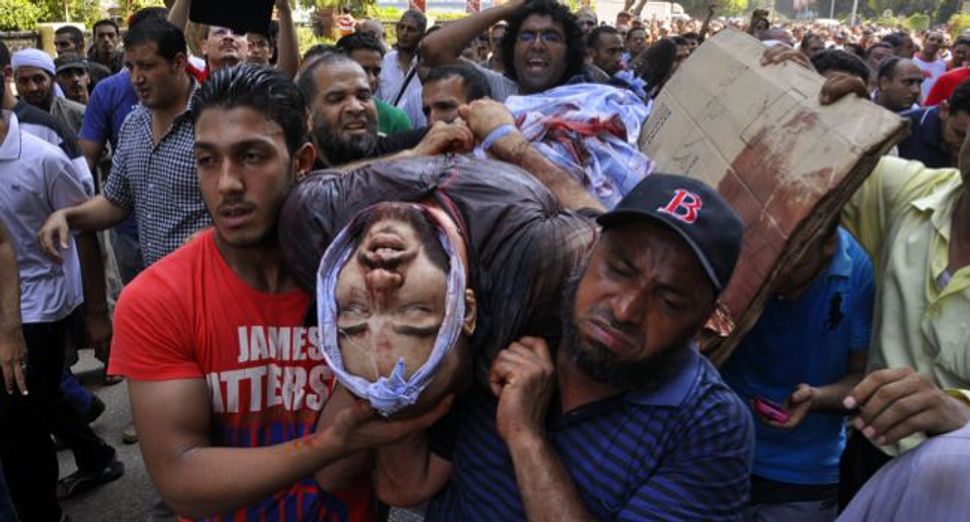 Chaos: More than 1,000 members of the Egyptian Muslim Brotherhood have been killed in street violence over the past weeks. Image by Getty Images

Were there any satisfaction to be gotten from saying “I told you so” about Egypt, Israel would have every reason today to be a satisfied country instead of a worried one. While just about everyone else was giddily celebrating the fall of Hosni Mubarak and the wondrous “Arab Spring,” Israeli government circles were among the few to voice cautionary doubts.

For this, of course, Israel was widely criticized. (When is a chance to criticize Israel ever missed?) It was accused of taking the side of reaction against freedom, of preferring its supposedly cozy relationship with the Mubarak regime to the good of the Egyptian people, of selfishly wanting to continue flaunting itself as the Middle East’s only democracy. Those party-pooping Israelis!

It would be too much, I suppose, to expect anyone to apologize now. (When is Israel ever apologized to?) Nevertheless, the world was wrong and Israel was right. Egypt and Arab society were not about to take the great leap forward to democracy that was being so confidently predicted for them. They were about to lapse into bloody chaos.

Bloody chaos was not necessarily what the cautionary doubters foresaw in the early winter of 2011. What was clear to them, rather, was that there were only two organized bodies in Egyptian society capable of filling the vacuum left by Mubarak’s fall — the army and the Muslim Brotherhood, neither of which stood for democratic principles. The much-touted “democratic and liberal” forces of the “Egyptian revolution” hardly existed in Egypt and were largely figments of the Western media’s imagination.

You didn’t have to be a genius to see this coming. You simply had to have a familiarity with Arab society such as Israel, which lives smack in the middle of the Arab world, happens to have and Europe and America do not. This society is not ready for liberal democracy and does not particularly want it. It has its own values, which are neither liberal nor democratic. These include a deference to patriarchal authority; a belief in male dominance; a fierce loyalty to family, clan, tribe and religion, and the conviction that the rights of the group come before those of the individual. There are certainly iconoclasts in the Arab world who challenge all this, but for the most part they do not yet comprise a significant body of opinion. We have seen this in Iraq, in Libya, in Syria — and now in Egypt.

There’s no point in being condescendingly dismissive. The values that prevail in contemporary Arab society have been those of much of the human race for most of its history, and if Western civilization has gradually outgrown them, the ultimate balance sheet of its having done so is far from clear. Arab countries look at Western ones and find much that is repellent alongside what is attractive. The assumption that, at heart, they yearn to be just like us is self-flattering and arrogant.

The ostensibly “selfish” Israeli reaction to the “Arab Spring” was a perfectly reasonable one. Israel did not ask itself, “What is best for Egypt?” because that is a question that only Egyptians can answer. It asked, “What is best for Israel?” — to which the answer was a stable, nonradically Islamist Egyptian government that is not pledged to Israel’s destruction and will keep its agreements with it. The issue was not democracy. It was — and continues to be — preferring an undemocratic Egyptian army to an undemocratic Muslim Brotherhood.

The United States and Europe might take a page from Israel’s book. It isn’t their job to promote democracy in Egypt, and it isn’t their job to resist it. It is their job to look after their own interests. These may certainly include withholding financial support from the current Egyptian government, but this should be done because one’s taxpayers shouldn’t be asked to fund a political system they find obnoxious, not as a way of pressuring Egypt to change. If there is any lesson to be learned from the two and a half years of the “Arab Spring,” it’s that the law of unintended consequences must always be respected. You never know what will happen when you try to change your own society. You know even less when you try to change somebody else’s.

As Egypt Falls Apart, Israel Whispers: ‘We Told You So’