For Israeli Military, Armor’s Out, Cyber Is In 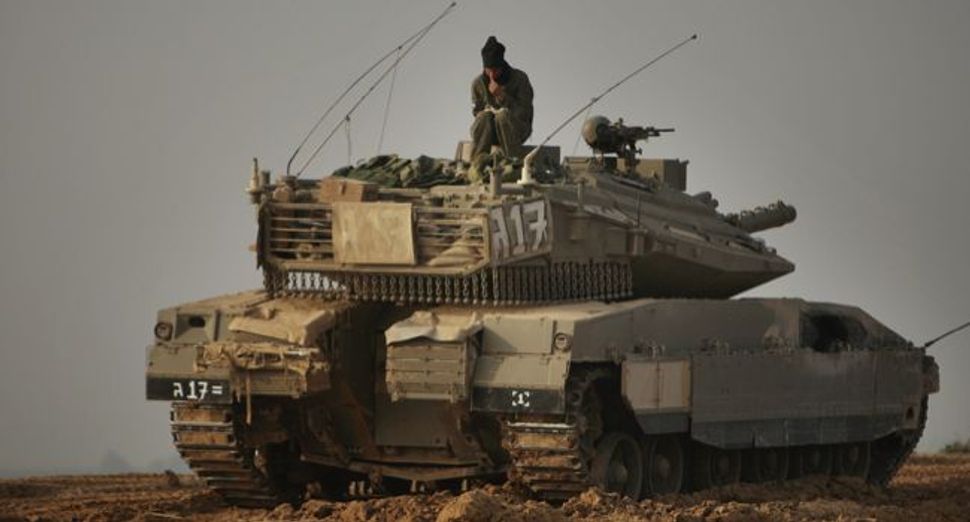 Tanks for the Memories: Is it time to bid farewell to the storied Merkava tanks that have defended Israel for so long? Image by Getty Images

Officers in the U.S. Army have long envied the “short drive” they claim the Israel Defense Forces has to reach its front lines, bemoaning the tyranny of distance when deploying to places like Iraq and Afghanistan.

Having relatively short distances to go when meeting a threat means that the IDF is able to go in hard and heavy without the vicious logistics tail that accompanies American operations, making the problem of repair and maintenance a matter of days rather than weeks.

A glance at the slow, expensive withdrawal from Afghanistan illustrates the point perfectly. The Army says that the eye-watering cost of flying or floating home the $28 billion in gear it has in the country makes leaving some behind a matter of necessity. As a result, only about $22 billion worth of equipment will go home by the end of 2014. The situation is so desperate that the Army is literally shredding — in giant industrial-sized shredders shipped to Afghanistan — about 2,000 of its hulking Mine Resistant Ambush Protected infantry carriers before it leaves.

For reference, those MRAPs cost between $500,000 and $1 million apiece, and the oldest ones in America’s arsenal were built in 2008.

Make no mistake, the Army isn’t doing this because it has money to burn. It’s doing so because the money is drying up, and bean counters found that in the end it’s simply cheaper to eat the cost of destroying 2,000 vehicles in the Hindu Kush than it is to bring them home.

But while the IDF and the Army exist in different worlds when it comes to the logistic struggles they have to surmount when fighting their wars, they have been newly united in their need to rather quickly meet fresh challenges: reducing manpower, reducing (relative) firepower and reducing their budgets. And fast.

As a result of political pressures in both Washington and Jerusalem to curtail costs, both ground forces are betting their futures on a smaller, lighter, more technically capable power that will need to do everything from fighting terrorists to facing off against other states, and do it with fewer soldiers.

In July, the Israeli military presented its plans to cut 1.5 billion shekels from its 40 billion shekel budget by 2014, followed by another 3 billion shekel cut in 2014, with the ground forces slated to take the brunt of the cuts — the same kind of changes that have become all but a fait accompli for the U.S. Army.

The IDF has said that it is making plans to get rid of 4,000 to 5,000 career officers over the next several years while mothballing artillery units along with scores of tanks. According to Israeli media, there has also been talk of grounding two air force squadrons and two navy ships.

Similarly, the U.S. Army is slashing its force from a wartime high of 570,000 soldiers to 490,000 by 2017 — and Chief of Staff Gen. Ray Odierno, has said that if Congress and the White House are unable to reach a “grand bargain” on deficit reduction measures, another 100,000 soldiers will have to be cut over the next several years, bringing the Army down to pre-World War II levels. While the IDF isn’t looking at cuts that steep, the street protests over social policy, the social safety net and defense spending in 2011 have forced the government’s hand, leading to a radical rethinking of the policies adopted after the 2006 war in Lebanon. IDF Chief of Staff Benny Gantz and his team have been working quietly on a new five-year plan codenamed Teuza for more than a year, and only in July did they roll it out to the public. The idea is grounded on the notion that since Israel no longer faces columns of tanks and fighter planes lined up along its borders, waiting to strike, the force can be safely retooled to better reflect current threats.

The threat, according to the analysis, revolves around state-affiliated terrorist groups in Gaza and the Sinai, and in rockets fired from Lebanon. There’s also the problem of containing spillover from places like Syria, where the fabric of society appears to have all but unraveled and the Assad regime has shown itself vicious enough to begin using chemical weapons against its own citizens. Given these diffuse — and not necessarily existential — threats, priority will therefore be placed on cyber and intelligence-gathering technologies rather than on continuing to buy more Merkava tanks and Namer infantry vehicles built for bulldozing their way through fixed defenses. Anti- missile systems like Iron Dome and the forthcoming David’s Sling will serve to keep the missile threat at bay, the thinking goes, while Israeli developers fashion the next Stuxnet virus and use hacking tools to eavesdrop on suspected terror cells and disrupt the operations of hostile states.

There is, of course, risk. The IDF considered the 60-ton, heavily armored Namer infantry carrier a necessity after the 2006 Lebanon War, where well-placed roadside bombs and RPGs hit Israeli armor hard, leading military leadership to opt for heavy armor solutions.

The vehicle is so effective that the U.S. Army tested it at Fort Bliss, Texas, in 2012, and soldiers gave it rave reviews. But Army brass said it was too heavy and not technologically advanced enough to meet their needs.

But any worries about a lack of resolve for either force would be misplaced. The Army is still involved in a shooting war in Afghanistan and is actively partnering with the Special Operations Command to beef up operations in places like the Horn of Africa and the Sahel region.

And, during an August 25 Cabinet meeting, Benjamin Netanyahu, expressing his frustration with how slowly he perceives the White House is moving to confront Bashar al-Assad, said that “we will always know to defend our people and our state against whoever attacks us, tries to attack us or has attacked us.”

So while budgets and heavy armor look to be in some trouble, and cyber warriors see their credibility rise in the eyes of their superiors, don’t expect either force to fail from keeping their gun sights clean.

Paul McLeary is the land warfare correspondent for Defense News in Washington DC.

For Israeli Military, Armor’s Out, Cyber Is In