Chelsea Manning’s Identity Crisis Is One Jews Should Relate To 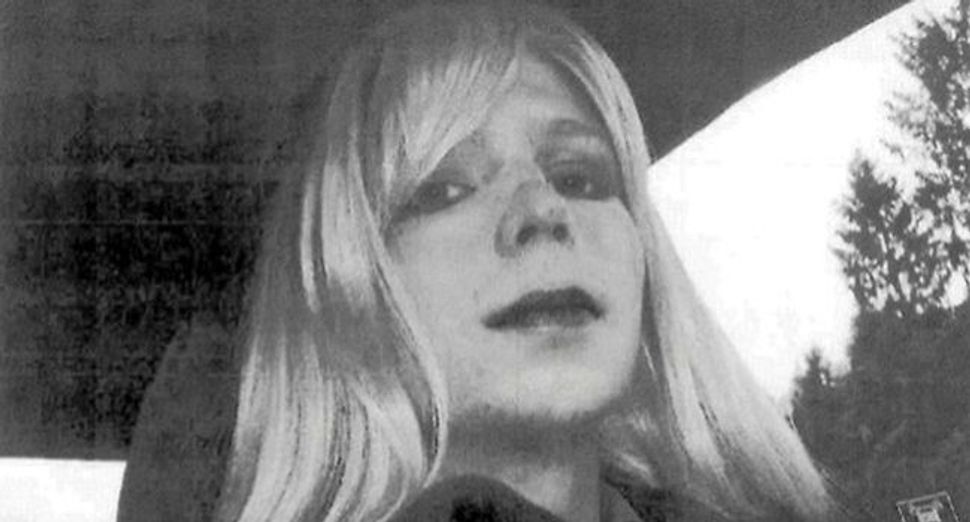 Coming Out: Bradley Manning?s crisis of gender identity has played out in the spotlight. Image by U.S. Army

We Jews know this question well. Henry Kissinger: good for the Jews? Brandeis? Koufax? Seinfeld? As an American minority, Jews are naturally sensitive to the way we are perceived, and to the messengers who — without our endorsement or permission — represent us to the world.

Likewise in the lesbian, gay, bisexual and transgender community. Some of our public faces are heroes (Harvey Milk), some are martyrs (Matthew Shepard) and some are flawed and imperfect, just like all of us.

So is Chelsea, née Bradley, Manning “good for the gays”?

In some quarters she is regarded as a hero, in others as a traitor. But as the gradual revelations about Manning’s sexual and gender identities have grown, it’s become clear that, like it or not, she is now part of something larger than her own story. She is a face of the LGBT community, and arguably the most famous — or infamous — transgender person in the world. We’re stuck with her.

Throughout the Manning ordeal, I’ve been struck by certain similarities between the LGBT and Jewish experiences — specifically, the interlocking questions of gender, identity and autonomy.

Transgender people remain the most invisible, the least understood and the most stigmatized element of the LGBT community. They are often targets of violence: On a single day in late August, two transgender women were murdered in hate crimes in New York (Islan Nettles) and Los Angeles (Domonique Newburn).

Such violence is a symptom of ignorance, fear and marginalization. Let me be the first to admit that when I initially encountered trans folk, I was confused, and thus dismissive of transgender reality. But the more I learned, the more I was able to understand, empathize and respect.

First, what the rest of us need to understand about transgender people is that gender is between your ears, not between your legs — and that, like sexual orientation, it may be experienced as entirely unchosen, or chosen, or some combination of the two. Most of us have no idea what it’s like to have one’s sense of gender not align with one’s biological, anatomical sex — what doctors call gender dysphoria. Just try to imagine what that might be like.

Second, precisely because our powers of imagination are limited, the only reliable judge of someone’s gender identity is the person in question. When someone comes to understand his or her gender identity (again, not the biological, anatomical sex, but the felt sense of male, female or other), that self-understanding must be accorded respect. It’s part of human autonomy: the right to say for oneself who one is.

In this regard, the media’s response to Manning’s gender identity has been poor. The Associated Press, the major networks, even NPR — they have all rejected Manning’s own self-definition, referring to Chelsea as “he,” as if they know Chelsea Manning’s gender better than she does. And of course the conservative media has been far worse.

Maybe the Forward has done so much better because Jews have an understanding of self-identification not just regarding Chelsea Manning, but also regarding transgender people in general. Jews, too, self-identify. And we expect that our declarations of identity be respected even if they do not conform to someone else’s standards. Witness the outrage when Orthodox rabbis refuse to honor a non-Orthodox conversion, or to tell a would-be immigrant to Israel that he or she is not really Jewish.

In another time, we might have taken such external definitions for granted. Today, however, Jews, like LGBT people, expect a degree of respect for our processes of self-definition.

If anything, transgender people present an even stronger case, because we have clinical evidence of what happens when gender dysphoria goes undiagnosed. Often it is mistaken for depression, attention deficit disorder, even autism. Doctors have treated teens for all these and more, only to find that symptoms disappear entirely once the patient is able to live according to his or her gender identity.

In the case of Manning, who knows exactly how her gender confusion contributed to her alienation, or confusion, or, for that matter, her sense of justice and injustice? We’ll never have the answers to these questions — only the understanding that repression leads to distortion, and the different parts of our lives are all bound up with one another.

This, too, is a lesson Jews have learned over the centuries. As a community, we are still traumatized by the Holocaust, and that trauma affects Jewish culture, politics and psychology. None is hermetically sealed off from another. When an essential aspect of one’s self-identity is threatened or repressed, it bleeds into the rest of one’s life.

Whether we regard Chelsea Manning as a hero or a villain, gender identity is part of the self-definition to which every human being is entitled. It is oppressive to decide for someone else who that person understands himself of herself to be. To paraphrase Hillel, if I am not for myself — if I cannot assert myself, speak my truth, declare my identity — who will be for me?

Chelsea Manning’s Identity Crisis Is One Jews Should Relate To