Syria in the Crosshairs, All Outcomes Terrible 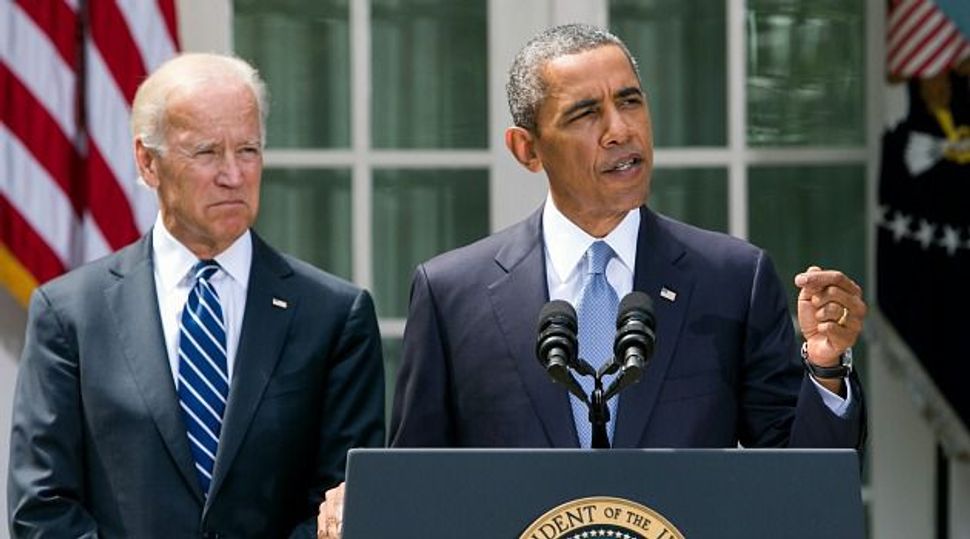 Bad Options: Barack Obama announces that he will ask Congress for its backing of an attack on Syria. Will the delay make any of his options any more palatable? Image by getty images

Rosh Hashanah, tradition teaches, is the birthday of the world, the mother of all new beginnings. This year, alas, you’d be forgiven for feeling as though it’s more like the end of the world.

If so, it’s somehow fitting that it’s ending right where it began, somewhere east of Eden in the Fertile Crescent, in the land called Syria. The Arabs used to call it Bilad a-Sham, roughly “the land on the left,” or “place of bad luck.” You should only know.

Here’s the trouble: Once the Assad regime unleashed chemical weapons on its civilian population on August 21, violating one of the most fundamental of the modern laws of war, America had no choice but to respond militarily. Unfortunately, our response stands every chance of making things worse rather than better.

Let’s examine them one at a time. For starters, to let the atrocity pass without consequences would have been to acknowledge that the international rules of civilized behavior that we’ve so painstakingly constructed over the past century are a dead letter. We’d be sliding back toward the law of the jungle, but with infinitely deadlier tools at our disposal.

Moreover, for America to let the chemical attack slide after having declared it a “red line” would be devastating for our credibility as a superpower. Anything we tried in the coming years, whether restraining Iran and North Korea, pressing for Israeli-Palestinian reconciliation, confronting Chinese currency manipulation or opposing Brazil’s Amazon deforestation, would be laughed off as cheap talk.

At some point, a nation’s word has to mean something. Congress needs to consider that as it prepares to vote. Particularly congressional Republicans, who supported (and for the most part still support) President Bush’s decision to enter Iraq a decade ago, need to remember what this decision means for America’s standing. It’s not merely the president, whatever they think of him, whose credibility they’re being asked to back up. It’s America’s.

On the other hand, a military response could easily make things worse. Anything less than a shattering blow would tell the Assad regime that it got away with mass murder. At best the regime would learn to calibrate its atrocities more carefully henceforth. At worst it would be emboldened, knowing America isn’t serious and the rebels are on their own. Beyond reinforcing Assad, it would encourage Iran’s worst mischief-making impulses.

But a devastating blow could spell the end of the Assad regime and hasten a rebel victory. That would bring down a brutal dictatorship, true, but it might well be replaced by a coalition of Al-Qaeda-linked jihadis. Those groups, principally Ahrar a-Sham, the Al-Nusra Front and the Islamic State of Iraq and a-Sham, appear to be the best-organized and most determined fighting forces on the rebel side.

Any option that offers even the slightest risk of giving them a foothold in a territory as strategic as Syria, with its Mediterranean ports and common borders with Turkey, Jordan and Lebanon, not to mention Israel, should be off the table.

The third option is to let the two sides keep bleeding each other, as the neoconservative military historian Edward Luttwak recommended in a recent New York Times Sunday Review essay, bluntly titled “In Syria, America Loses If Either Side Wins.” “There is only one outcome that the United States can possibly favor: an indefinite draw,” Luttwak wrote.

Luttwak’s recipe for maintaining the bloody stalemate is to open and close the spigot of American aid to the rebels as needed so that a balance of power is maintained. “That this is now the best option is unfortunate, indeed tragic,” he writes, “but favoring it is not a cruel imposition on the people of Syria, because a great majority of them are facing exactly the same predicament.” Put simply, those Syrians who manage to survive will benefit by avoiding both Assad’s despotism and the jihadis’ tyranny.

One flaw in this scenario, besides the screamingly obvious moral one, is that hundreds of thousands of Syrians aren’t sitting back to enjoy its benefits. They’re flooding into neighboring countries, creating a humanitarian disaster that’s threatening the stability of those states. And as it continues, the sight of the slaughter and Washington’s studied indifference intensifies the already raging anti-Americanism throughout the region. The fighting in Syria may be tying down substantial Iranian, Hezbollah and jihadi forces, but they’re not so busy that they can’t spare a few bombs for Americans in Yemen — or for northern Israel. No, stalemate isn’t a solution, either.

There’s a school of thought that says if President Obama had shown enough backbone and intervened with force earlier, the moderates of the Syrian National Coalition and the Free Syrian Army might have gained a clear upper hand. Another school maintains that it’s not too late. Some democratic activists like Hussein Ibish in Washington argue that America could tip the balance by smart support for the moderate rebels. Supplying them with sophisticated weapons and intelligence, plus training and command-and-control capability — all in close coordination with allies like France, Britain, Turkey and Saudi Arabia — could do the job.

That’s a hopeful scenario — perhaps the only one visible on the landscape right now. But it sounds suspiciously like the plan America had going into Iraq and Afghanistan after 9/11. For that matter, it sounds like Israel’s plan going into Lebanon in 1982. Indeed, two of those targets, Lebanon and Iraq, looked more promising at the outset than Syria does today. At least in those arenas the forces of political Islam, Hezbollah in Lebanon and Al-Qaeda in Iraq, were non-existent until the invasions created them. In Syria the jihadis are already on the ascendant.

Of all the various scenarios, this last one is the only one with any reasonable prospect of a positive outcome. It’s also the riskiest, as it could easily drag us into yet another multiyear quagmire of the sort we just escaped in Iraq. Taking that into account, the idea of a managed stalemate holds out the greatest promise of success, though at a horrific cost in humanitarian and moral terms.

A dozen years ago, in 2001, Rosh Hashanah arrived just a week after the attack on the Twin Towers. If that didn’t feel like the end of the world at the time, that was only because the horror numbed all feeling. Four years later, in 2005, the new year found a great American city drowning in the catastrophe of Hurricane Katrina, the costliest natural disaster in U.S. history. This year we greet the season with dread of what lies ahead.

Once, it seems, the new year was a time of joy and hope. Something has changed.

Syria in the Crosshairs, All Outcomes Terrible