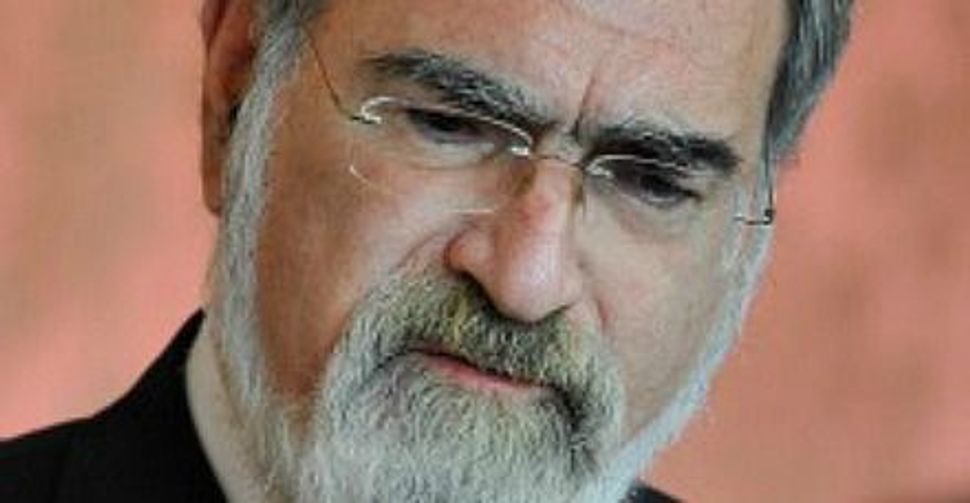 Two countries; two chief rabbinates. But the institutions could hardly be more different.

I have spent part of this summer observing the Chief Rabbi elections in Israel, and part in the U.K., hearing the opinions of British Jews about the end of the Jonathan Sacks era, with their Chief Rabbi (or strictly speaking the Chief Rabbi they share with the Commonwealth) due to retire on Sunday after two decades. The London-based congregational rabbi Ephraim Mirvis will replace him.

Sacks’ great success has been showing a dignified face of Judaism to non-observant Jewry and to non-Jewish Britain. He is famous for his short “Thought for the Day” monologues on BBC Radio and for his writing in the mainstream media. Sacks is a popular public intellectual far beyond the Jewish community, as he seems to know how to say the right things to inspire without pushing his beliefs.

In fact, the common tongue-in-cheek comment about him among Orthodox Jews is that he has been “Chief Rabbi for the Gentiles” — revered outside of his obvious following, Orthodox Jewry, but failing to resonate in this observant community.

The Israeli Chief Rabbinate has precisely the opposite orientation — it represents Orthodoxy and fails to communicate its message beyond.

Israel just rejected a candidate for Chief Rabbi who had a vision and a program for communicating with the mainstream. David Stav wanted to make the rabbinate friendlier to the general public, and for it to give guidance and inspiration to the non-religious majority. But this didn’t fit the agenda of the panel that chooses who fills the role.

For the Ashkenazi Chief Rabbi post, that Stav failed to win, Israel chose figure who has at best spoken in a manner that was at best unfortunately phrases and at worst downright offensive – David Lau.

Last month, it emerged that Lau had used a derogatory term to refer to foreign black basketball players in Israel.

His associates claimed that he was just saying that there’s no point following basketball because there’s no national pride in the sport as the players aren’t Israelis. But even if this scenario of least offensiveness is accurate it underscores just how out of touch Lau is with the public’s perception of acceptable speech — and how the key qualities that British Chief Rabbis are chosen for, namely communication skills and sensitivity, mean little in Israel.

The fact that a Britain’s Chief Rabbi Sacks will be so missed by the mainstream population should give the Israeli rabbinate much food for thought on the possibilities for communicating and building relationships beyond the Orthodox community. But unfortunately there seems to be little interest in such lessons.