What If Matthew Shepard’s Murder Wasn’t an Anti-Gay Hate Crime? 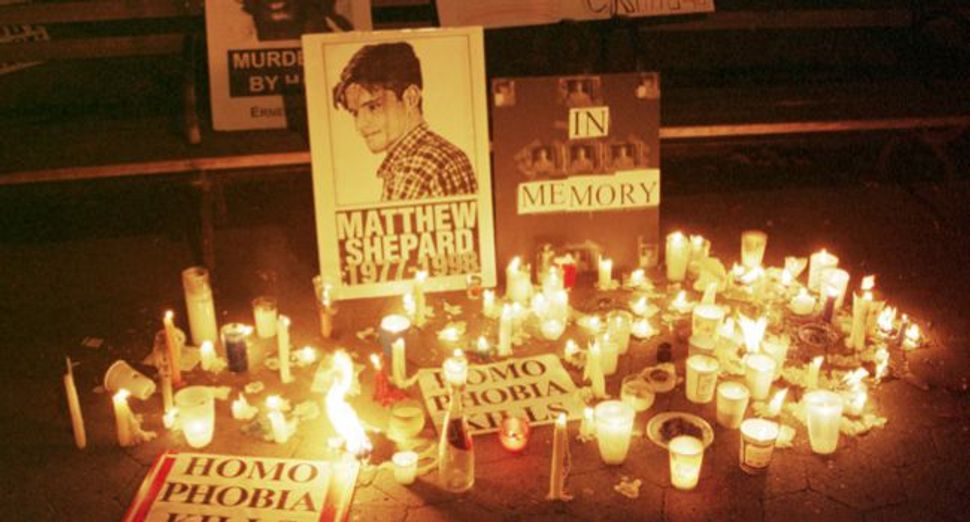 How important is historical truth?

The obvious answer is “very.” Just think of Holocaust denial, which is anti-Semitism built upon historical distortions.

But what if an effort to counter hate is based on an inspirational story — and that story is a lie?

That’s the moral quandary at the heart of journalist Steve Jimenez’s newly released nonfiction book, “The Book of Matt: Hidden Truths About the Murder of Matthew Shepard” (Steerforth Press, 2013).

In the interests of full disclosure, Steve Jimenez was a high school classmate of mine. When we met again at our 40th reunion two years ago, he told me he had spent more than a decade trying to ascertain the facts of the 1998 Matthew Shepard murder. It was a story I thought I knew well — like most people, I was (and remain) appalled by this vicious crime. Shepard was a gay University of Wyoming student who met two men at a bar, men who were supposedly so violently anti-gay that they beat him senseless and left him tied up to a fence outside Laramie.

Shepard died, and his murder became a powerful symbol of the need to include attacks on LGBT people in hate crime legislation. Judy Shepard, Matthew’s mom, and I were both keynote speakers at a 2001 conference on hate crime, and I found her courage in the face of such an indescribable loss inspiring. I have been, and remain, a strong proponent of hate crime legislation. In 2009 President Obama signed a new hate crime bill into law, one that included LGBT people under its provisions. It is known as the “Matthew Shepard Act.”

But Steve Jimenez makes a compelling case that this horrific murder was not a hate crime at all.

The story reported in the media, and largely presented at trial, was a simple one. Shepard was in the Fireside Lounge in Laramie, Wyoming, when he met two young men, Aaron McKinney and Russell Henderson. Supposedly Shepard told these strangers he was gay. They left the bar with him, then pistol whipped and tortured him, and left him to die tied up to a fence at the end of town. They allegedly did this because Shepard was gay. McKinney at one point even used a “gay panic defense,” asserting that he had been so shocked by Shepard’s alleged sexual advances, he was somehow not culpable.

But McKinney and Shepard were not strangers. They had many friends in common, and had socialized with each other. And they had an even deeper history. Both were dealing (and using) methamphetamine, and as such were business rivals. McKinney was also bisexual, and had had sexual relations with Shepard.

How did the facts of this case become so distorted? Partly because a courtroom is not a venue for ascertaining truth. Prosecutors present facts designed to lead the jury to convict (rather than to tell a complete tale), and defense lawyers present cases designed to leave their client as intact as possible (either hoping for an acquittal or the shortest sentence possible). But in this case, there were additional forces at play. People involved in the drug-dealing world who might have shed some light on what had transpired had a motive for keeping quiet, or concocting other stories: self-preservation, fear of being labeled a “snitch.” And the press immediately jumped on — and continued playing up — the hate crime angle. It fit. Anti-bigotry groups, relying on media and other reports, used the case to underscore the danger of homophobia and hate crimes.

Those dangers remain real, including the continuation of violent attacks on people because they are gay, despite the progress on other fronts, such as gay marriage.

No doubt Steve Jimenez will face criticism for his powerful book. Why did he have to dig around and stir things up? Won’t people who are opposed to equal rights for LGBT people use his exposé for their reactionary purposes? How do these revelations harm those who built programs teaching tolerance based on the Shepard murder? How will Shepard’s family feel?

Five years before the Shepard murder, I wrote a report on the Academy Award-nominated film “Liberators.” The film’s premise was that a segregated military unit — the all-African American 761st Tank Battalion — had liberated both the Dachau and Buchenwald concentration camps. The film came out when Black-Jewish relations were particularly strained, in the aftermath of the Crown Heights riots. This was a healing story, and leaders from both communities saw the value in promoting it.

Except that it wasn’t true. While this unit was heroic and deserved to be celebrated for what it accomplished during the Second World War (despite the raw bigotry its members suffered), it was nowhere near either camp. The film’s producers were interested in a good story, not a correct one. And when the film was pulled from PBS because of concerns about its factual inaccuracies, some supporters of the film complained that the facts didn’t really matter.

But the facts did matter, even though Holocaust deniers exploited the film’s problems for their own purposes. Most insistent on the truth were the members of the 761st — they had their history denied first by prejudice, and then by political distortion. They only wanted to be acknowledged and remembered for what they did, not what they didn’t do.

The movement for equality for gay people is important, not because of what happened to Matthew Shepard on an October night 15 years ago, but because no one should be less valued as a human being because of who they are or who they love. There were nearly 1,300 hate crimes against gay people in 2011, according to statistics reported by the Department of Justice. Our athletes are going to the Olympics in Russia this winter, where they might be punished for simply saying that gay people should have equal rights. When combating hatred and bigotry, the truth is always important.

Kenneth S. Stern is an attorney and author whose work focuses on hatred.

What If Matthew Shepard’s Murder Wasn’t an Anti-Gay Hate Crime?