The ‘Unsavory’ Among Us 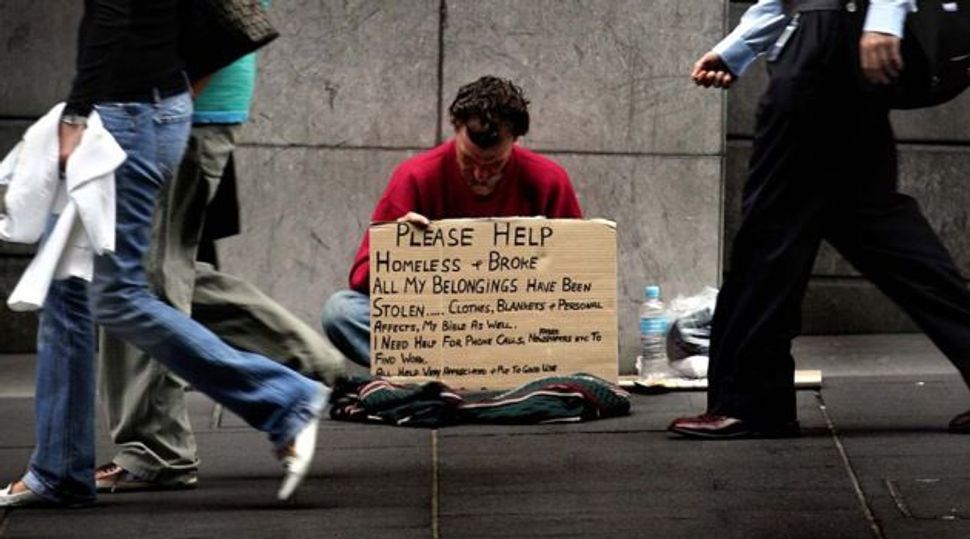 Desperation: The minimum wage has dropped precipitously over the past few decades. Image by Getty Images

My neighborhood association is disturbed by a recent and ongoing surge in the number of “unsavory” people who use the neighborhood’s plentiful benches for sleeping. It proposes installing bench railings every three feet, which would render stretching out for sleep impossible.

As might be expected, many of my neighborhood’s “unsavories” have no jobs, hence no income save what they can earn as panhandlers, of which the neighborhood has many. (My favorite is a man whose sign includes “We accept Visa and Mastercard.”) And, so the Association chairman makes abundantly clear, there are real problems associated with the people he describes as unsavory. Evidently, they are guilty of publicly drinking, being intoxicated, urinating in public, acting belligerently, accosting people and trespassing on private property. I confess that I have encountered some (though not much) of all this, easily attributable to an urban environment very near Boston’s central bus terminal.

There’s an ongoing Facebook debate on what to do. Some people propose getting rid of the benches altogether, but as our public-spirited chair reminds us, “unsavory characters are congregating in other locations in the neighborhood without benches, so we know that the benches themselves are not causing the problem.” He advocates, instead, more police attention to the relevant locations as well as steps to improve their physical appearance. If, he says, “we can get some of these things accomplished in the next few months, cold weather will buy us a few more months of relative peace to work on bigger picture items.”

All, as I have learned to expect from our chair, thoughtful. But guess what’s missing, missing entirely? What’s missing is any attention, any at all, to the “unsavory” people themselves. Are they alcoholics or drug users? Are they stymied by mental health problems? How much of their problem derives from their poverty? Who are they, and why? What, if anything, can be done not only about them but also for them? (I recall one presentation, a year or so ago, by a police officer tasked with helping solve the problem, whose “best” idea was to collect the unsavories and drive them to nearby Somerville, dropping them there.) Can it be that our only concern is how to rid the area of the unsavories?

These are very big and very hard questions. It is tempting to throw up our hands in despair. Who are we to address a problem of this magnitude, let alone to solve it? We read of the homeless and hungry, we empathize with them (albeit from a considerable distance), but the problem is far too vast and the solution far too complex for us to do more than cluck our tongues.

I am haunted by the words of Albert Camus, referring to those “who have been stricken from the rolls of humanity.”

The minimum wage, as it is, is very far from a living wage. It consigns those who must make do with it to a rung on the ladder above which three or more rungs are missing. Moving up is well nigh impossible. There is a reason why on indexes of upward mobility, the United States scores below the United Kingdom, France, New Zealand, Japan, Germany, Sweden, Finland, Norway and Denmark — just as we score higher, much higher, on indexes of economic inequality. Raising the minimum wage would be a blessing — but a very modest blessing. No raise that is at all realistic would be sufficient to change the frozenness of our wage structure.

We read, in the powerful U’Netaneh Tokef prayer, that “utshuvah utfilah utzdakah” — repentance and prayer and righteousness — can “transform the evil decree.” I do not know that that is so, but neither do I know it is not so. On balance, it seems to me a good place to begin.

The ‘Unsavory’ Among Us