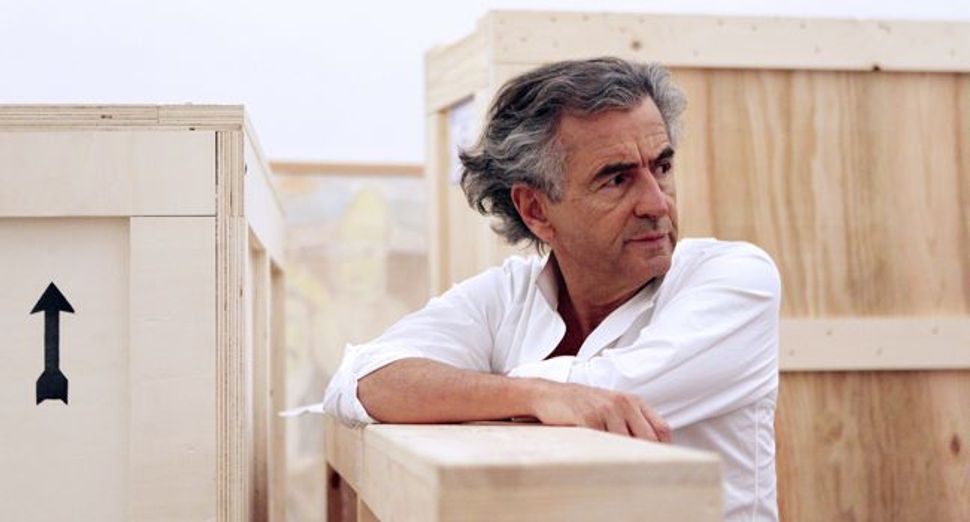 Center of Attention: Bernard Henri-Lévy has made himself into a crusader for human rights with an outsized influence. Image by Getty Images

Have you heard about the sinister role the French intellectual Bernard-Henri Lévy, in cahoots with the Israeli government, played in bringing down the government of Egypt’s president, Mohamed Morsi? And that BHL — aka He-Who-Must-Not-Be-Named-but-Wears-White-Shirts-Opened-to-the-Navel — used telekinesis to achieve his nefarious goal?

These, at least, are the questions that recent news dispatches from Turkey would have us ask. In July, as the resistance to the government’s effort to pave over Istanbul’s Taksim Square morphed into massive popular protests, the newscaster Yigit Bulut announced that dark forces, including Lufthansa airlines and the Elders of Zion, had harnessed the power of telekinesis to kill Prime Minister Recep Tayyib Erdogan. That Bulut was subsequently named chief adviser to the prime minister suggests that his dire assessment had an audience of at least one.

But this report from the borderlands of Europe, Asia, and sanity was quickly overtaken by a second story. In late August, Erdogan announced on Turkish television that BHL and Israel were, indeed, behind Morsi’s overthrow. The proof? The prime minister excitedly cited a debate between BHL and Tzipi Livni, held in Tel Aviv in 2011. As with most everything else in our post-private lives, YouTube carried a recording of the encounter. In an exchange with Livni — who, it should be noted, was not then serving in the government — Henri-Lévy did, in fact, declare that the Muslim Brotherhood should be prevented from coming to power “by all sorts of means.” He went on to add: “Democracy is not only elections. It is values.”

These remarks are, to be sure, provocative and debatable. But to flaunt them as evidence of a global Jewish conspiracy goes beyond provocation and debate. One need not be a historian to trace the intellectual and ideological pedigree of Erdogan’s claim, one rooted in the political anti-Semitism spawned by the great economic, social and cultural changes in late 19th-century Europe. Nor must one be a worrywart to look over the shoulder when the leader of a powerful country like Turkey, astride the crossroads of many civilizations, makes such claims without cracking a smile.

But other aspects of this affair deserve a few moments of reflection. First, it illustrates the deepening tragedy of Turkish democracy. When his Justice and Development Party came to power a decade ago, Erdogan was widely hailed as a political realist who would show that Islam and democracy could not just coexist, but also flourish together. But that was then, and now is now. Erdogan has become increasingly authoritarian and heavy-handed, jailing dozens of journalists and terrorizing writers and artists, like the Nobel laureate Orhan Pamuk. This has endeared Erdogan to his rural and religious base, but has alienated urban and secular Turkish society. While the police repressed the protests with brutality but relatively little blood, the political and ideological divisions in Turkey have only deepened. Turkey has long straddled two continents, but now it also straddles two conceptions of democracy.

Second, there is BHL. Ever since the publication in 1979 of his book “Barbarism With a Human Face” (in which denunciation of Marxism was eloquent but shallower, and several years later, than in the works of Albert Camus and Raymond Aron), the now old nouveau philosophe has basked, and frequently baked, in the limelight of the French media. Leading with his mane of graying hair, BHL has traveled to the hotspots of global conflict and genocidal crimes, from Bangladesh to Bosnia, Darfur to Libya, defending the oppressed as well as “le droit d’ingérence,” or the right to intervene militarily in countries that either pursue, permit or cannot prevent crimes against humanity.

Many critics — I’m one of them, I confess — cannot overlook that following BHL on his various missions is a film crew recording his efforts on behalf of humanity. Or that BHL has difficulty discussing the plight of others in anything but the first person. Think globally, act self-centeredly: That could well be his motto. Oddly, Erdogan’s lunatic accusation dovetails with the perception that critics have long had of BHL: that he is always center stage, yet also in the wings, directing others.

And yet, while critics dismiss his books and essays, his love of the media and self-mythologizing, they cannot dismiss BHL’s constancy on behalf of the victims of genocide, and his fury-like pursuit of those who carry out these crimes. Best known, perhaps, is the pivotal role he played in persuading then-president Nicolas Sarkozy to intervene militarily in Libya. Over the past few weeks, not only has Henri-Lévy denounced the murderous actions of the Egyptian generals, but he also advocates the immediate freezing of all military and economic aid to the regime.

And here’s the rub: For once, we wish that Erdogan were right and that BHL had the ear of the powerful in this particular case.