‘Half of Syrian Rebels’ Are Radical Islamists 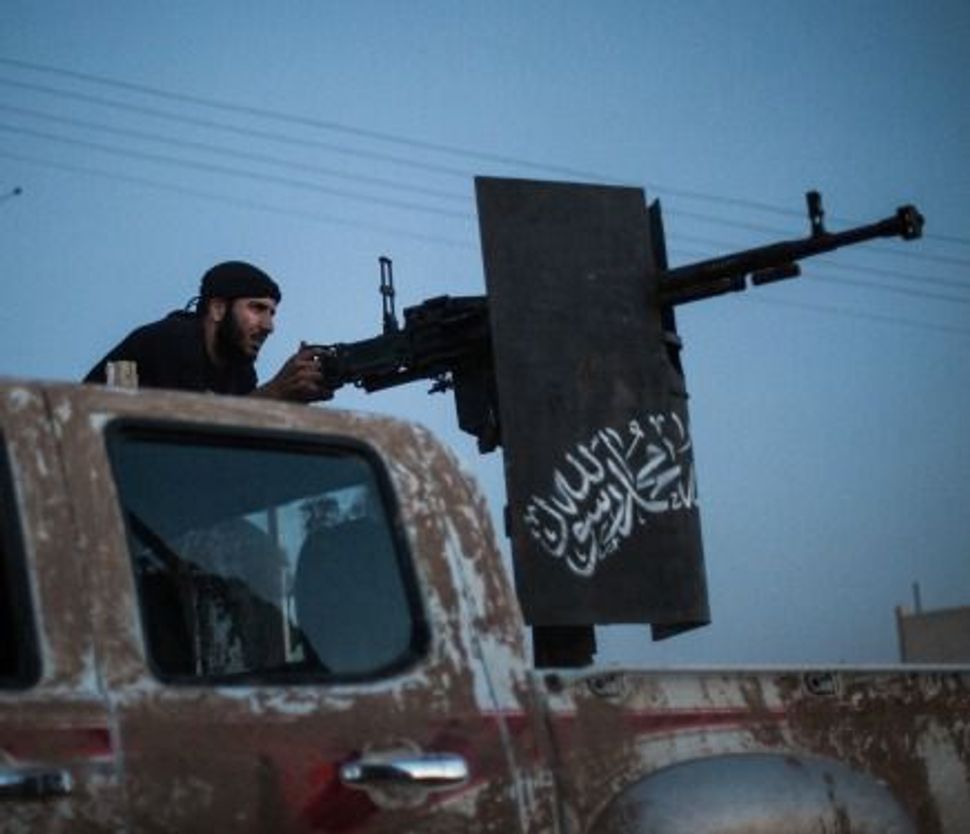 Nearly half the rebels fighting in Syria are jihadists linked to Al Qaeda or hardline Islamists fighting for a strict Islamic state, according to a study that’s about to be published by IHS Jane’s, the respected British defense consultancy.

Advance word of the study appears in Monday’s edition of Britain’s Daily Telegraph. The Jane’s study is said to be due out later this week.

The study reportedly claims there are about 100,000 fighters in the Syrian insurgency, divided into about 1,000 independent and often hostile units. About 10,000 belong to “powerful factions” of jihadists linked to Al Qaeda. These groups are fighting for an Islamic state within a larger Middle East caliphate.

Another 30,000 to 35,000 are hardline Islamists whose philosophy is similar to the jihadists, but are focused purely on Syria rather than an international revolution. In addition, according the Telegraph, there are “at least a further 30,000 moderates belonging to groups that have an Islamic character.”

The remainder, some 25,000 to 30,000, belong to secular groups with a democratic or nationalist orientation. In other words, between 25% and 30% of the total rebel force consists of groups considered friendly to the West, according to the British study.

According to the Telegraph, the assessment

accords with the view of Western diplomats [who] estimate that less than one third of the opposition forces are “palatable” to Britain, while American envoys put the figure even lower.

The main author of the study is Charles Lister, who is identified at his LinkedIn page as head of MENA – IHS Jane’s Terrorism & Insurgency Centre. The study is “based on intelligence estimates and interviews with activists and militants.”

The dominant forces among the hardline factions, as I wrote earlier this month, are two Al Qaeda-linked groups, the Al-Nusra Front (Jabhat Al-Nusra) and the Islamic State in Iraq and A-Sham (or Iraq and the Levant).

The Telegraph report says the two groups have engaged in firefights with several moderate rebel groups and have assassinated several commanders of the Free Syrian Army, the main Western-backed alliance, in the region around the crucial Mediterranean port city of Latakia in the country’s northwest.

They’ve also taken over revenue-producing oil and gas facilities in the north, giving them economic clout that allows them to hand out food and control schools in rebel-held areas.

The dominant role of Islamist factions appears to put the West in a bind regarding its relations with the rebels. On one hand, Western leaders are fearful of aiding groups that could turn the country into an Al Qaeda stronghold. On the other hand, Lister told the Telegraph:

“Because of the Islamist make up of such a large proportion of the opposition, the fear is that if the West doesn’t play its cards right, it will end up pushing these people away from the people we are backing,” he said. “If the West looks as though it is not interested in removing Assad, moderate Islamists are also likely to be pushed further towards extremists.”

‘Half of Syrian Rebels’ Are Radical Islamists