When Munich Became a Synonym for Appeasement 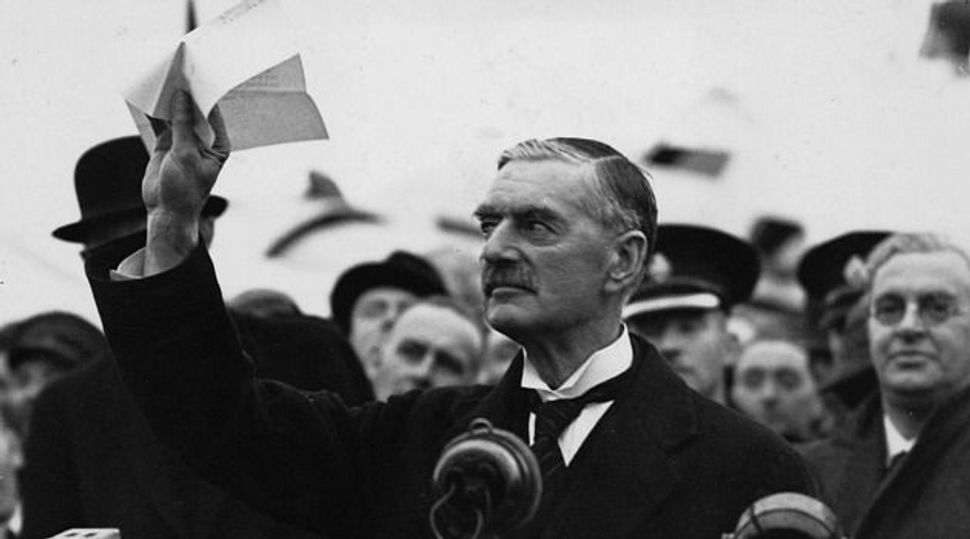 No Peace in Our Time: British Prime Minister Neville Chamberlain flashes the agreement with Adolf Hitler that he claimed ensured peace with the Nazi madman. Image by getty images

“A quarrel in a far away country between people of whom we know nothing.” When he pronounced these words, British Prime Minister Neville Chamberlain was referring, of course, to Czechoslovakia. That “quarrel” eventually led to the Munich Agreement: an event which opened the path to WWII and whose 75th anniversary we are now marking. Rarely have past and present dovetailed with such unsettling timing.

While few American politicians today can equal Chamberlain’s grammatical rigor, quite a number do echo his sentiments not on Mitteleuropa, but instead the Middle East. At the same time, their opponents cite Munich as a warning to those who would, in their view, repeat the mistake of turning a blind eye to a nation bent on violence against innocents.

American Secretary of State John Kerry declared the West confronted a “Munich moment,” while the secretary general of the French Socialist Party, Harlem Désir, charged that the “spirit of Munich” had infected French critics of a military strike against Syria.

Historical comparisons are, by their nature, inexact yet invaluable, inevitable but inevitably limited. Munich—the synecdoche for the dramatic and dense series events of September 1938 that led to the West’s acquiescence to Czechoslovakia’s dismemberment—is no exception. Yet it is impossible to ignore the parallels and wonder if they offer guidance for us today.

Let us recall, first, the differences. By 1938, Adolph Hitler had already scuttled the restraints that the Treaty of Versailles had placed upon Germany two decades earlier. Confident and cunning, he then turned his attention to Czechoslovakia, the only pluralist and democratic state that rose from the rubble of the Habsburg Empire.

Posing as the liberator of the ethnic Germans in southern Czechoslovakia, Hitler threatened to go to war if Prague did not surrender these territories to Germany. Their nations bound to Czechoslovakia by firm treaty obligations, Chamberlain and Edouard Daladier, the French prime minister, nevertheless ignored them. Gathered at Berchtesgaden, at a meeting stage-managed by Fascist Italy’s Benito Mussolini, Chamberlain and Daladier acceded to Hitler’s demands.

Six months later, when Germany swallowed what had been left of an independent Czechoslovakia, Chamberlain was among the few westerners who expressed sincere shock.

In 1938, of course, Europe teetered on the edge of a second world war within twenty years, while the conflict in Syria is civil and sectarian. Unlike Hitler, Bachar al-Assad does not have global aims of conquest. While his father once had regional ambitions, the son’s only aim, at least now, is to hold on to power in Damascus and, if necessary, an Alawite state on the coast.

Moreover, Czechoslovakia was a model democracy led by the admirable Edvard Benes. The Syrian National Council, representing the resistance, contends not only against Assad’s bloody-minded regime, but equally barbaric Islamic extremists within their own ranks. The newly elected leader of the SNC, Ahmad Toumeh, may well be a moderate Islamist, but chances are he won’t be a Benes, much less be able to rein in the Sunni extremists. Only a modern Chamberlain will express shock at future videos of summary executions, cannibalism and civilian massacres.

These differences, though, wither when compared to the similarities. As historians have noted, Ba’athism, the ideology of Assad’s Syria, bears a close family resemblance to Nazism: its racist bearings, feverish nationalism, and cult of the leader are all hallmarks of a fascist state. Moreover, just as France and Great Britain had watched Nazi Germany’s growing violence against political opponents and Jews during the 1930s, so too has the West been a passive audience to Assad’s mounting crimes against his own people. In both cases, this quiescence emboldened the regimes to up the ante in atrocities, including the use of chemical warfare against civilians.

Moreover, the roles and reactions of western political leaders today are a remake of 1938. During the Munich crisis, while France wanted to call Hitler on his threats, she was utterly dependent on British support. When Chamberlain’s cabinet wavered over, then withdrew the military option, Prime Minister Edouard Daladier, who had no illusions about Hitler, was forced to accept the decision. So, too, today: lwhen President François Hollande led the diplomatic charge against Assad’s regime, he soon discovered his British and American allies were running furiously in place.

Meanwhile, just as Hitler’s ally Mussolini used the crisis to burnish his international reputation, so too has Assad’s enabler, Vladimir Putin. (Perhaps we should not make too much of the fact that both the Italian and Russian leaders like to bare their torsos in public.)

Finally, there is public opinion then and now. Hovering over Munich was the traumatic experience of an earlier war—indeed, the war to end all wars that bled white France and Britain and made the survivors deeply skeptical about official rationales for future wars. Similarly, the Bush Administration’s misuse and abuse of intelligence disabused us of the trust we once placed in our leaders. Our war in that other cradle of Ba’athism, Iraq, killed 4500 American soldiers, maimed tens of thousands of others and left behind a country freed of Saddam Hussein, but crippled by sectarian strife and chronic violence. It was the war to spawn yet more wars.

But public opinion is complex — and largely hostage to the fears and confusion that reigned among its leaders. In 1938, Chamberlain seemed to speak for many on both sides of the Channel when he declared: “In war, whichever side may call itself the victor, there are no winners, but only losers.”

Moreover, there was the overwhelming wave of relief that greeted his announcement that he had secured “peace in our time.”

Yet, as the historian Telford Taylor reminds us, the British believed Chamberlain had won guarantees for Czechoslovakia and ended German expansionism. When they discovered they had been had, an outraged public insisted on standing by Czechoslovakia.

Could Chamberlain have galvanized that same public earlier had he explained, in clear and concise terms, why Hitler could not be trusted? While we cannot answer that question with certainty, we do know the tragic consequences of the Munich Agreement.

And Syria? Will the agreement between Russia and the U.S. concerning chemical weapons serve Assad’s purposes as Munich served Hitler’s? No one can say. But history reminds that “red lines” can be as easily subverted as the black lines of a nation’s borders.

When Munich Became a Synonym for Appeasement