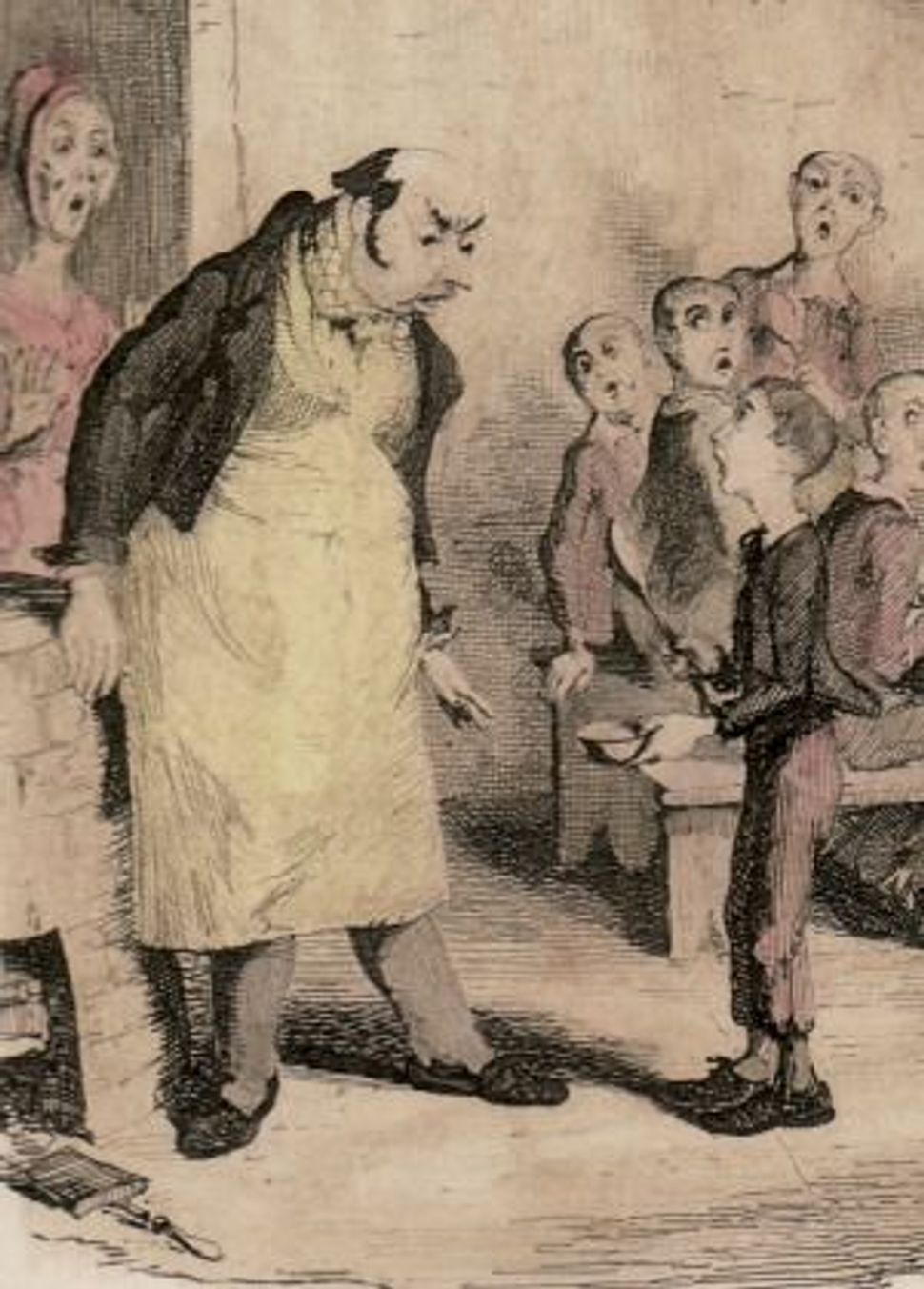 ?Please, sir, I want some more? Image by Cruikshank/Wikimedia Commons

To be fair, it’s not all bad news. For example, the report shows that 2012 was the first year since 2007, before the economy collapsed, that America’s median household income didn’t decline. It was statistically the same in 2012 as it was in 2011, roughly $51,000. That was also the first year since 2007 that there was no statistically significant increase in the number of people in poverty (46 million) or their percentage of the population (15%). All three numbers are still worse than they were in 2007, but at least they’ve stopped deteriorating. That’s the good news.

Pretty much all the rest of it is bad news, some of it shockingly so. Between 2000 and 2012 the median income for non-elderly households declined a whopping 11.6%, or $7,490 after correcting for inflation. Among African-American households the decline was 14.8%. A full 27% of blacks live in poverty, nearly 11 million people in all. Close to half (44%) of all Americans in poverty are living in what’s called “deep poverty,” with an income that’s less than half the poverty line. And the number of people under 65 receiving health insurance on the job dropped by 13.7 million or 10.8% in those 12 years (almost all before Obamacare kicked in).

Some of the information in the report is quite surprising. Remember President Reagan’s quip in 1987, “In the 60s we waged a war on poverty and poverty won”? It turns out he was dead wrong. The poverty rate plummeted during the 1960s, from about 22% of the population in 1959 to about 11% in 1973. It stayed roughly level until about 1978 and then started climbing, reaching 15% in 1982, the second year of Reagan’s presidency. (Hence the increase in poverty that he correctly perceived in 1987 was actually his handiwork.) It stayed up around 15% until 1993, the first year of Bill Clinton’s presidency, when it began dropping again, reaching 11.3% in 2000, Clinton’s last year. The next year, the first of the Bush administration it began climbing steadily, reaching 15% in 2011. In fact, contrary to what you might think, there was no dramatic jump in poverty after 2007. It’s just been a steady climb since 2000.

Likewise, median income declined between 2000 and 2007, though only a bit, then proceeded to plummet. In other words, some of our troubles began when the economy collapsed, but important parts of the disaster began directly after the Supreme Court’s historic December 2000 ruling in Bush v. Gore. It takes some digging to find out, though. The Census report doesn’t highlight this at all. It’s all built around the post-2007 collapse.

A separate income study, this one based on Internal Revenue Service figures, was released September 3 by economist Emmanuel Saez at the University of California-Berkeley. It shows that average family incomes (as opposed to median) grew by 6% between 2009 and 2012. But nearly all the gain went to families in the top 1% of the population, whose income grew 31.4%. The other 99% saw an average gain of 0.4%. (And based on the above Census Bureau numbers, even that paltry increase seems to have gone mostly to the top 5%.) The Los Angeles Times published a summary of the Berkeley study on September 11.

The Economic Policy Institute, a labor-backed Washington think tank, pulled out some of the most interesting numbers from the Census Bureau’s report:

• -5.2%, -0.8%: The decline over the last decade in median earnings for full time, full year workers age 25 or more with a college degree, men and women, respectively

• $23,283: The poverty threshold for a family of four with two children

• 43.9%: The share of the poor population in “deep poverty,” or below half the poverty link

• 1.7 million: The number of people unemployment insurance kept out of poverty in 2012

• 4 million: How many fewer people would be in poverty if food stamps (SNAP) were added to money income in 2012

• 10.8 percentage points: The decline in the share of the under 65 population with employer-sponsored health insurance from 2000-2012

• 0.5 percent: The increase in employer-sponsored health insurance among 19-25 year olds, 2009 to 2012, the only group which saw this rate increase as their employment-to-populations ratio fell the most—almost surely due to the ACA provision to allow young adults to secure coverage through their parents’ employer-sponsored insurance policies