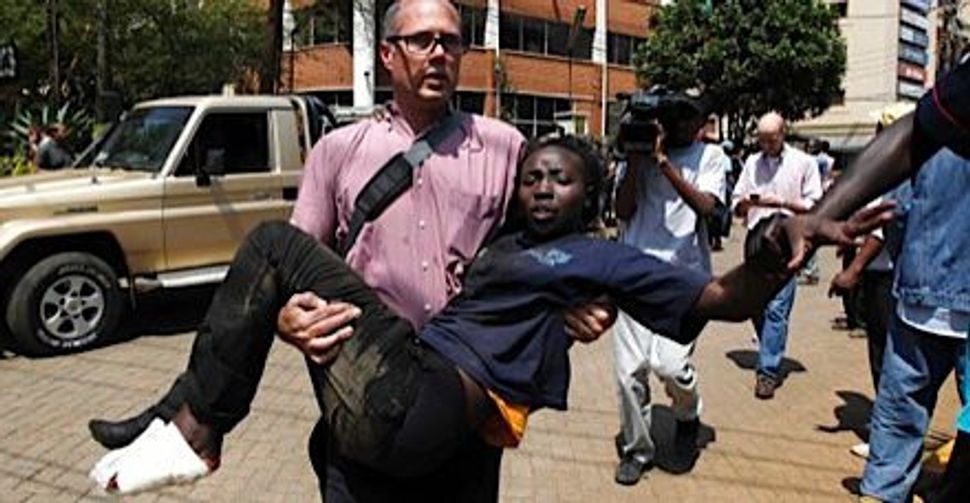 Journalist Tom Kirkwood rescuing a woman injured in a shootout between armed men and the police at the Westgate shopping mall in Nairobi, September 21, 2013. Image by Haaretz/Reuters

Running towards the sound of gunfire with my friend Goran Tomasevic felt familiar; we had worked together in Jerusalem during the start of the Intifada so gunfire and explosions were nothing new; what was different yesterday was that this was Nairobi, my home for the past six years and a place that has grown increasingly affluent and “normal” to anyone used to a middle-class life in any developing country.

And I think that is what was also most shocking on arriving at the mall itself. Already a trickle of people were emerging, either running or being carried. These were not people belonging to one particular “group” (Israelis or Palestinians) when I was in Jerusalem, not black Africans caught in a civil conflict or unfortunate western adventurers or tourists caught up in a hostage crisis, these were “ordinary Nairobians” – the same people I had seen on a very normal Saturday morning just hours before when I was shopping in the Nakumat supermarket store, in the same mall. Everything had just seemed so very “normal.”

And I think that is what has galvanized the country and it is what has caught the attention of the world, this is a normal middle class under attack, its a lifestyle, a form of behavior, that so many of us, so many Kenyans, so many Africans, so many in the developing world, aspire to.

So the people being brought out were regular shoppers and those working in the mall, from Kenyans who might later have been attending the Safaricom 7’s rugby, to members of the Asian community, to UN workers and foreign diplomats as well as waiters, shop assistants, workers. And, if you work at Westgate mall, you are probably a worker with a good future.