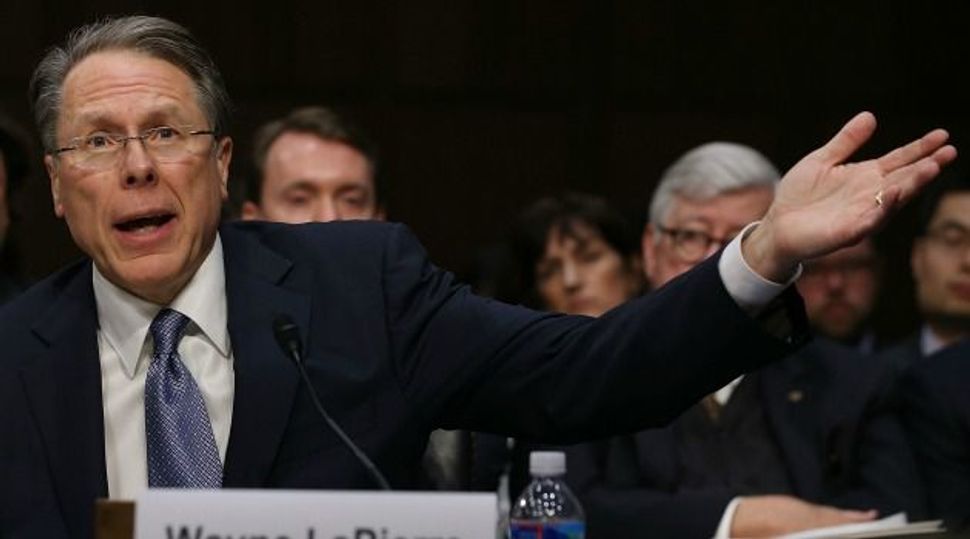 Looking the Other Way: Wayne LaPierre, the head of the NRA, saw in the recent Navy Yard shooting another illustration of the terrible way America treats the mentally ill. Image by Getty Images

After each mass shooting by an obviously disturbed American who indiscriminately mows down innocent civilians, the National Rifle Association’s Wayne LaPierre can always be counted on to put the problem in perspective. For LaPierre, the fact that Aaron Alexis shot and killed 12 people at the Washington Navy Yard on September 16 is yet another illustration of the terrible way America treats the mentally ill. “They need to be committed, is what they need to be, and if they’re committed, they’re not at the Navy Yard,” he said on “Meet the Press.”

Even the more reasonable voices who don’t subscribe to the LaPierre lock-’em-all-up theory of stemming mass violence continue to focus on what they contend is the link between mental illness and gun violence. It was all anyone in Congress wanted to talk about after the latest rampage, to the degree that they wanted to talk about it at all.

When our Nathan Guttman asked representatives of Jewish organizations how the Navy Yard shooting impacted their efforts to promote gun control, William Daroff, director of the Washington office for the Jewish Federations of North America, told him, “We are looking at mental health issues as they relate to the shooting, and specifically enhancing behavioral health information technology, so that information between providers is shared and available.”

Fine idea. Enhance technology. Go further. Fix a mental health care system that is hardly a system at all, one that allows an Aaron Alexis to fall through cracks so big, they become dangerous chasms.

But it’s not going to make much difference in lowering the rate of violence associated with guns.

The latest Gallup poll shows that nearly half of those surveyed blamed the failures in the mental health system for mass shootings, more than any other factor. Unfortunately, the facts just don’t support that opinion.

Scientists note that people with serious mental illnesses such as schizophrenia, bipolar disorder and depression do have a two-to-four-fold increase in violence. But according to a recent piece in Annals of Internal Medicine by Carl Fisher and Jeffrey Lieberman, people with these conditions account for only 3% to 5% of violence nationwide.

It may seem that America is overrun with the likes of Aaron Alexis, Adam Lanza, Seung-Hui Cho, Jared Loughner, James Eagan Holmes — the list really can go on and on — but these disturbed shooters account for a tiny minority of the unnecessary, sometimes tragic deaths and injuries by firearms that scar the nation every day.

Not only is the focus on mental illness a distraction, it raises another set of troubling issues. Accurately assessing the risk that someone with schizophrenia, for instance, will grab a gun to kill people is not easily done. “Furthermore,” Fisher and Lieberman wrote, “an undue focus on all persons with mental illness is discriminatory and stigmatizing and might discourage people with treatable mental disorders from seeking help.”

So even though a vast majority of Americans want Congress to expand background checks before gun purchases, public sentiment continues to be thwarted by lawmakers in thrall to the guy who just wants to lock up the mentally ill and give guns to the rest of us.

There’s another painful irony here. Many mental health experts say that there is one simple, direct thing that members of Congress can do to help Americans who have mental health issues. This one step will enable 2.6 million Americans with mental illness or substance abuse to obtain health insurance, while another 2.7 million will be able to access care through the expansion of Medicaid.

This step will also put more money into state governments to help offset the costs of mental health treatment — something states have cut by billions of dollars in recent years.

And what might this one step be called? The Affordable Care Act. Starting October 1, President Obama’s signature health care initiative will dramatically increase access to care for the mentally ill. It won’t fix a broken system on its own, it won’t stem the growing tide of mass shootings, but it will begin to address the very issue that is raised each time one of these tragic shootings occurs.

But, infuriatingly, some members of Congress are desperate to close down the government rather than fund a program that was made into law years — and a national election — ago.

Perhaps those lawmakers who refuse to enact even the most timid gun control legislation should be forced to explain to grieving families why they also want to decimate a program designed to help those who might contribute, if only a little, to gun violence in the future.