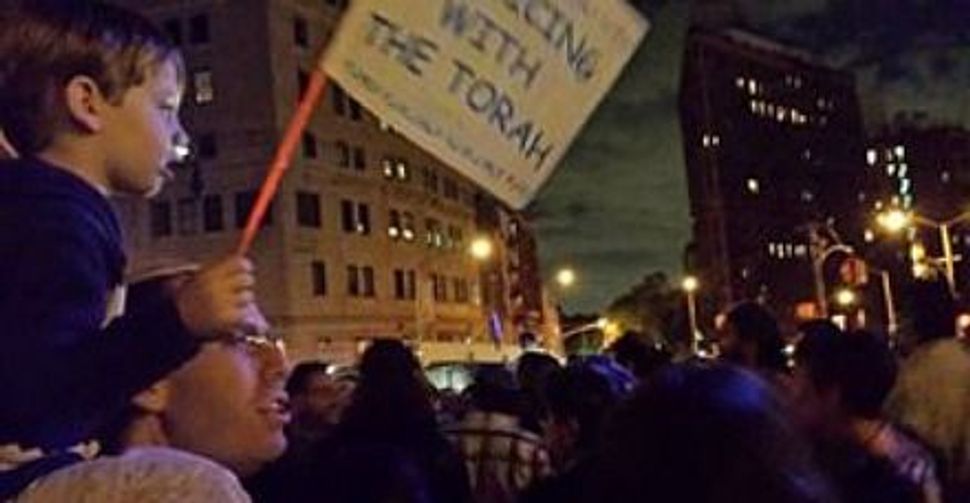 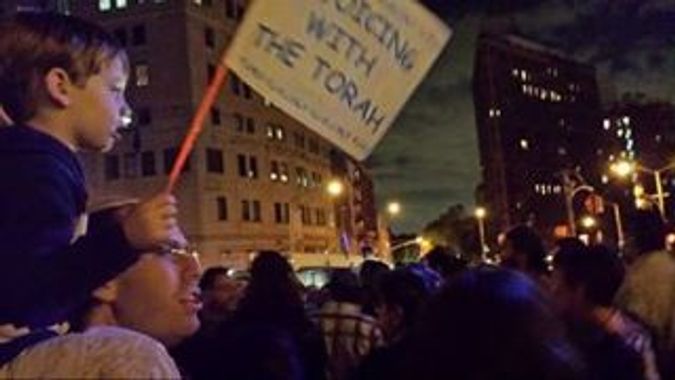 It was a Simchat Torah celebration that surely most of the Hasidim walking past had never before witnessed: hundreds of liberal Jews, men and women, young children and the middle-aged, dancing together with Torah scrolls held aloft. Revelers twirled round and round in Brooklyn’s Grand Army Plaza, just outside the entrance to Prospect Park.

“Simchat Torah Across Brooklyn,” as the event was dubbed by creator Joshua Breitzer, the cantor at Park Slope Reform Congregation Beth Elohim, became a nexus for Brooklyn Jewry as streimel-topped Satmar Hasidim walked past en route between Williamsburg and Boro Park and fedora-clad Chabad Hasidim walked by — a few stopping to observe the festivities — on their trek from other parts of Brooklyn to Crown Heights.

Close to 300 people responded on the event’s Facebook page that they would come. But several hundred more actually showed up. Many were members of some of the co-sponsoring synagogues and minyamin, which included Reform congregations Beth Elohim and Union Temple, Progressive Temple Beth Ahavath Sholom and Temple Beth Emeth v’Ohr to Conservative congregations Park Slope Jewish Center and the Flatbush & Shaare Torah Jewish Center.

Members of independent congregations Kolot Chayeinu and Congregation Mt. Sinai came, like some from Shir Hama’alot, Brooklyn Jews and Moishe House Park Slope, as did folks from congregations and minyans which declined to become formal co-sponsors, some because they are Orthodox and the gathering used musical instruments. There were also many in attendance who aren’t affiliated with a religious community.

Witnessing the large number of young adults —perhaps the majority of people there — passionately engaged in the dancing and singing, as Naomi Less played guitar and others playing clarinet, hand drums and accordion, was inspiring to me.

In our post-denominational age, and at a time when many mainstream synagogues are struggling, the evening sent a beautiful message about the passion for Judaism that these young Jews were demonstrating.

“It was just a phenomenally exhilarating time, a tremendous opportunity across Brooklyn and across the generational and political spectrum for people to come together and rejoice in the community and in the Torah,” Breitzer said later. “And do it in one of the most public spaces in Brooklyn, where everyone passing by can testify to the fact that there is a vibrant liberal Jewish scene in Brooklyn. It was great.”