Is Pope Francis Most Small-C Catholic Pontiff Ever? 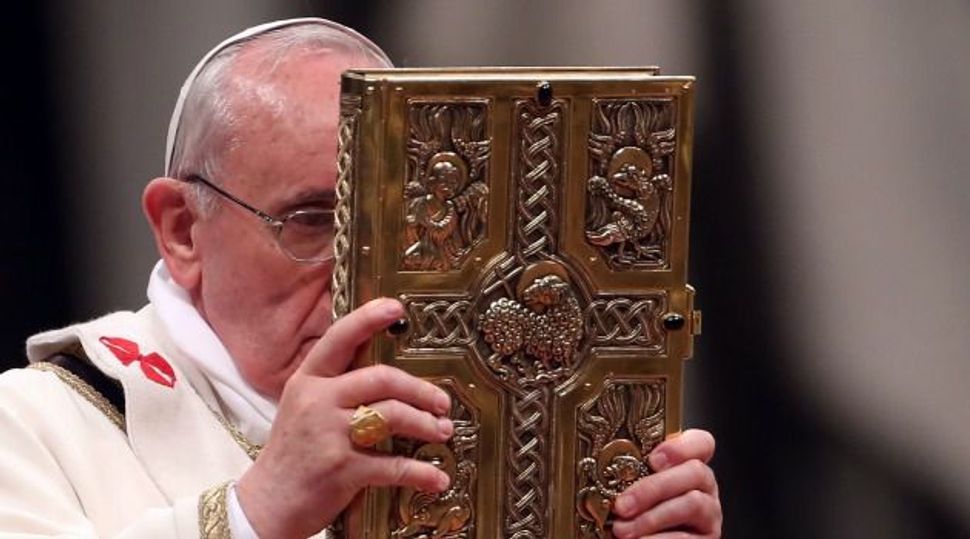 There has been near-universal joyous reaction to Pope Francis’s recent proclamation that the Roman Catholic Church needs to focus less on issues like homosexuality, abortion and contraception and more on other, deeper spiritual matters. The Holy Father has been lauded for his humility, and his reasoned stance that the Church needs to find a new sense of balance, lest it increasingly become a “small chapel.”

It is not as if the Pope is changing Roman Catholic doctrine on such matters. It simply means that the Church is going to attempt to re-calibrate itself, and to find a sense of balance, moving away from positions that have only succeeded in alienating huge sections of the flock.

So: is the Pope Catholic?

Yes, in its true meaning — genuinely catholic (universal) in his theological and social tastes. In some ways, the current occupant of the throne of Saint Peter is the most “Jewish” Pope we have ever encountered. It is difficult to remember a Pope who actually had the depth of relationships with the Jewish community as this Pope has enjoyed.

Yes, Pope John XXIII completely transformed Christian doctrine on Judaism and the role of the Jews in the crucifixion of Jesus. Pope John Paul II had relationships with Jews in his native Poland, and was the first Pope to visit a synagogue, and as a Polish survivor of the carnage of World War II, had a special sensitivity to the Shoah.

But Pope Francis, nee Cardinal Jorge Bergoglio, had a real working relationship with the Argentinian Jewish community, especially with its spiritual leaders. His response to the 1994 bombing of the AMIA center in Buenos Aires was notable for its compassion. He has visited synagogues in Argentina. Moreover, as Cardinal Bergoglio, he collaborated with Rabbi Abraham Skorka, the rector of the Seminario Rabínico Latinoamericano in the creation of Sobre El Cielo Y La Tierra (Regarding Heaven and Earth), which is the transcript of a series of conversations with the rabbi. It is a wonderful, powerful book, which earned its place as Amazon’s #1 religion book.

It is enough to create Pope envy.

Why? Because the Pope, while recognizing the authority of Roman Catholic doctrine on matters of sexuality, has looked critically at the way the Church has communicated its teachings in the realm of sexuality. Channeling the late Peggy Lee, he has begun singing an updated, theological version of “Is That All There Is?” No, the Pope is saying – this is not all there is to the Church, and it is way beyond time for the Church to say that and to act on that, and to find a better sense of balance.

So, what would happen if Jewish leaders followed the Pope’s lead?

Let’s start with the chief rabbis of Israel. “We, the chief rabbis of the state of Israel, believe in the primacy of halakha and we will neither ignore nor relativize it. However, we are prepared to say that the Orthodox rabbinate, has focused far too narrowly on issues like whether women can worship as equals at the Western Wall; or on “who is a Jew?”; or even on the punctiliousness of kashrut. We still care about those things. This has only succeeded in alienating huge swaths of the Jewish world and has focused untold hostility on traditional Judaism. We need to focus on far bigger issues, like the meaning of Torah in the world today, or on the ethics of war and occupation, or on how halakha speaks to the situation of foreign laborers. We are seeking a new kind of balance in Jewish life today.”

Now, let’s move to non-Orthodox rabbis, cantors and Jewish educators: “For far too long, we have allowed our institutions to become ‘bar mitzvah-centric.’ We have fostered a system where we expect Jewish kids to essentially learn prayers and Torah by rote, without spending nearly enough time discussing their meaning. We have concentrated on getting kids to ‘do the prayers,’ but not on praying. We will now have classes on kavannah and ‘awe management.’ We are seeking a new kind of balance in Jewish life today.”

Now, let’s imagine if this conversation could have happened thirty years ago. “We, the Jewish leaders of the United States, are committed to the centrality of the commandment to remember the Shoah. That commandment is emblazoned upon our hearts and scorched into our souls. But we note with some concern the proliferation of local Holocaust memorials and museums in many communities. With prophetic vision, we see the day when there will be a U.S. Holocaust Memorial Museum on the Mall in Washington, DC, to which people will flock. We humbly ask our generous philanthropists to create far more powerful and lasting memorials to the more than two million Jewish children who died in the Shoah by endowing Jewish education. Someday, there will be a program called “Birthright.” But we need a birthright program for Jewish education here, in our country. We are seeking a new kind of balance in Jewish life today.”

Yes, those conversations are a fantasy. With the exception of the Holocaust memorial conversation, they are actually happening, in small but powerful ways, in many places in the Jewish world today. But not as many as we need, and not as loudly as we need.

So, Holy Father, thanks for being our teacher. Thank you for reminding us, and people of all faiths, of the need to balance.

*Rabbi Jeffrey K. Salkin is an author and the spiritual leader of Temple Beth Am in Bayonne, N.J. He blogs at the Jewish Journal of Los Angeles and is the author of “Righteous Gentiles in the Hebrew Bible: Ancient Models for Sacred Relationships” (Jewish Lights).

Is Pope Francis Most Small-C Catholic Pontiff Ever?