No Need for Directions to Rav Ovadia’s Funeral 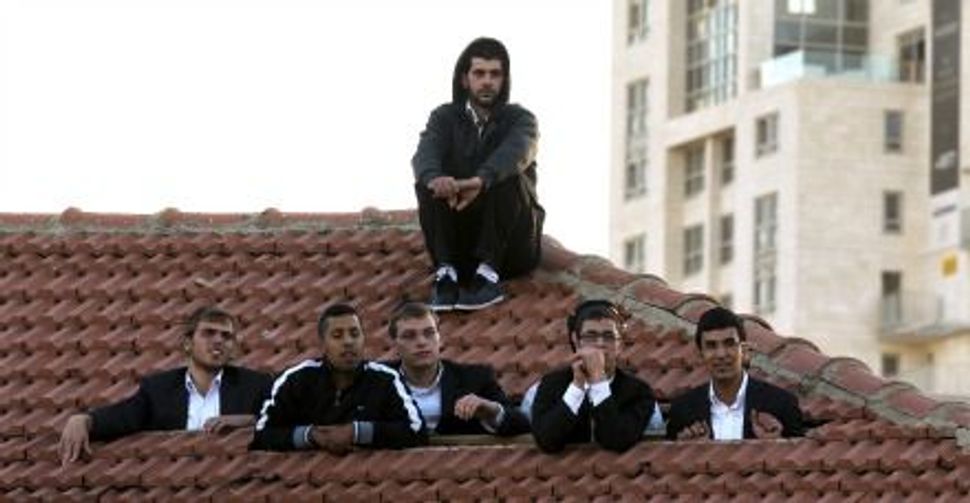 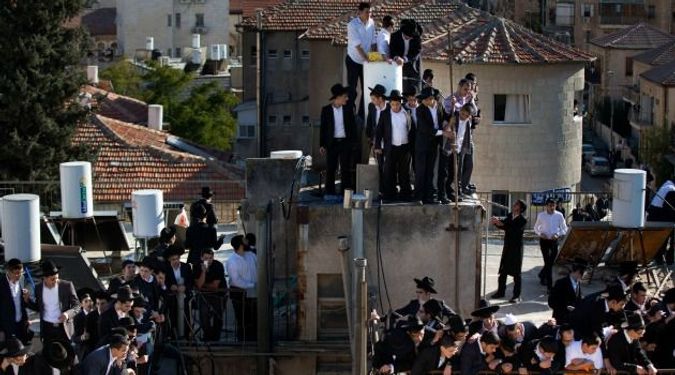 Stepping out of the Central Bus Station, I saw them, men in hats and coats walking together slowly, a steady stream moving east along one of Jerusalem’s central thoroughfares to the funeral of Rabbi Ovadia Yosef. At 5 p.m., an hour before the funeral, the streets were already closed to cars – the capital’s rush-hour rigmarole giving way to foot traffic that was softer but no less intense.

From a distance it looked homogenous –aerial photographs would later show a sea of black choking the broad avenues of haredi Orthodox northern Jerusalem. But as the group coalesced, men in polo shirts mixed with boys in sweatshirts and soldiers in full uniform – some still holding their guns. Knit kippot bobbed in the crowd with black hats, Sephardi haredim in wide fedoras walked with Ashkenazi hasids in bowlers. A man in a black coat made conversation with another in short sleeves. Women, almost all with modest dress and vastly outnumbered, mostly stood to the side.

The men talked, they shook hands. A few took out their cellphones, perhaps not ready to begin the public mourning of a public leader who, to many, still felt so close. Everyone in Israel knew Ovadia Yosef’s name, but in public his followers would hardly use it, opting instead to call him Maran, our master.

On the sidewalk, a half-dozen men stood at a long table offering a sugary orange drink. Behind them, a speaker blared a recording on loop, quoting a common blessing:

“’To give life to every living soul!’ Come say a blessing over a cold drink to benefit the soul of Maran, may his holy righteous memory be blessed!”

The faithful heeded the call, crowding around a spigot, holding cheap plastic cups that formed a growing pile on the ground once the commandment was fulfilled.

Behind them, on the street, men and boys stood with oversize tins collecting charity. Paper printouts taped to the cans promised that Maran approved of the collection.

As the sun began to set, a traditional Sephardic chant pierced through the air. It was not the funeral itself; we saw, minutes later, that we would not come close to the ceremony, blocked by the throngs that had arrived an hour, two hours before us. Even the loudspeaker that broadcast the service seemed almost out of sight. Some men began to strategize, to find anywhere to sit or stand in peace. Dozens of boys climbed onto a ledge a story above the street, sitting in a row like fans on a bleacher.

The rest of us pressed on, most trying to draw as close as possible to the body, the remainder swept along with the horde. The small space between individuals evaporated as the thousands behind us pushed forward, packing us in a unified mass and forcing us on, past a row of ambulances, past a soldier standing straight on the roof of a van, almost at attention. Was he on duty, or was he one of the many just trying to get a better view?

We settled into place, some by squeezing off into a side street, others using their elbows to create an inch of breathing room. With our view limited to the thousands surrounding us, only vaguely aware of the hundreds of thousands beyond, most of us turned our attention to the songs that coursed through the air, prayers of repentance usually sung ahead of the High Holidays. Many of us murmured a traditional call-and-response. Others whispered silently.

One man, spotting a friend sitting on a ledge across the street, called out his name with a smile. Another snapped a picture with his cellphone.

With the crowd, we said the shema. Over and over, we declared that God is the true god. We screamed the thirteen attributes of mercy. We begged for forgiveness.

A few of us began to cry, but the soft tears were soon outmatched by the screams amplified through the speakers. Rabbi after rabbi repeated the same biblical phrases. Some, unable to control their wailing, recited their eulogies in a chant, almost as if they were reading Torah.

“My father, my father, the chariot of Israel and its horsemen!” So began many of the eulogies, invoking the prophet Elisha’s mourning of Elijah, spoken now not only by Ovadia Yosef’s sons, but by colleagues, students, chief rabbis, politicians.

Two and a half hours after the funeral began, the sky dark and the air cold, the streets were still massed with people who spilled out of alleyways, side streets, boulevards, houses. Tables once featuring bottles of water were now littered with cups. Only an hour later did the crowds begin to disperse, leaving behind streets freckled with trash.

Myriads dissolved back into Jerusalem’s mazelike haredi district. The rest of us walked back to the bus station. Only then, catching the news, did I hear that 800,000 people had come to pay respects to Ovadia Yosef. It was ten percent of the country.

Small fractions of that crowd overwhelmed the bus station, Jerusalem’s transportation hub, making lines impossible and schedules irrelevant. Buses bound for Tel Aviv, usually departing every 20 minutes, came and went as fast as they could fill up.

But one thing didn’t change. As soon as they were separated from the grief and the prayers, passengers began to scream, push and curse trying to board the bus – as if it were any other night at the Jerusalem Bus Station. Only then did it seem that things would, before long, return to normal.

No Need for Directions to Rav Ovadia’s Funeral