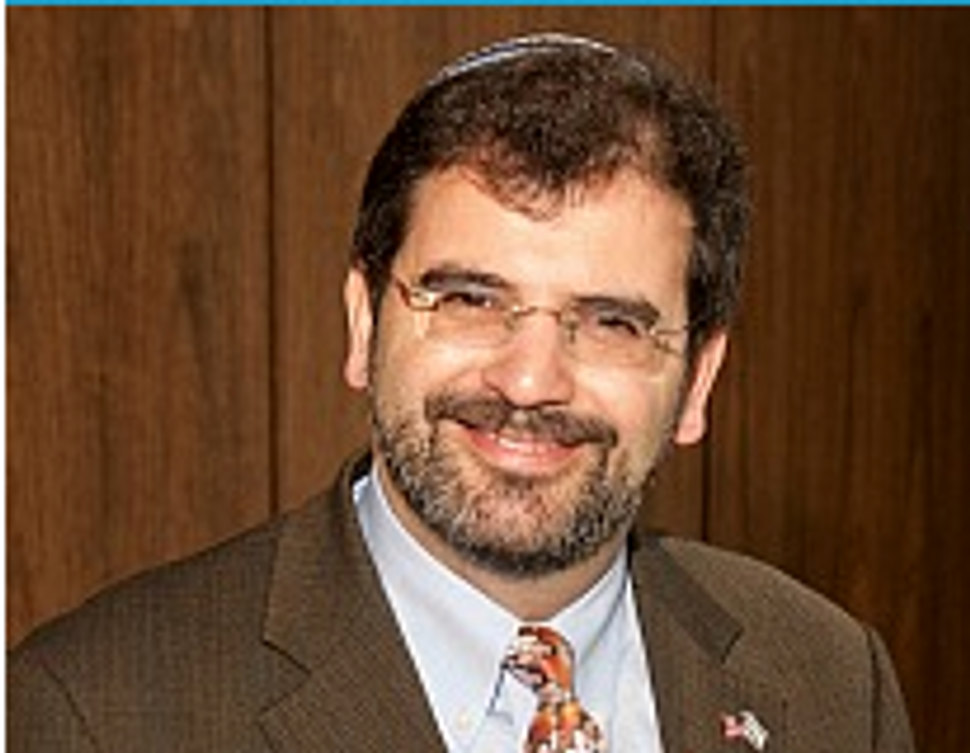 Lopatin has served as the rabbi of Anshe Sholom B’nai Israel Congregation, a cutting edge Modern Orthodox Synagogue in Chicago. He is a scholar in Medieval Arabic Thought, and is a double ordinee: by Yeshivas Brisk in Chicago, and by Yeshiva University’s Rabbi Isaac Elchanan Theological Seminary.

Yeshivat Chovevei Torah has for the past decade and more promoted the idea of “Open Orthodoxy,” a pluralistic approach to Modern Orthodoxy that pushes a number of envelopes in Orthodox practice — including the role of women in leadership positions — while maintaining a commitment to traditional modes of rabbinical study and Orthodox ideology.

Numerous speakers at the ceremony re-affirmed the Chovevei mission, but each put his or her own stamp on the event.

Weiss offered a thoughtful exploration of organizational transition, which reached back to Jewish history and tradition. He closed with his signature expression: leading the assembled in the singing (and dancing) of a traditional hymn. In anyone else’s hands, the moment would have been hokey in the extreme; done by Weiss, the moment was moving, indeed profoundly so.

Rabbi Dov Linzer, Chovevei’s dean, set the tone for the event with a traditional d’var-Torah. Historian Marc Shapiro was both thoughtful and moving in connecting the dots between the work of Rabbi Jehiel Yaakov Weinberg, one of the 20th century’s great halakhic scholars who headed the famed Hildesheimer Seminary in Berlin, and Chovevei. Shapiro argued that Rabbi Weinberg’s scholarly and pluralistic Orthodox Hildesheimer was a model for Yeshivat Chovevei Torah.

Lopatin, in his response, picked up on the Weinberg/Hildesheimer theme. In an unusual d’var-Torah, Lopatin wove together “Ger” Chasidism from the classic Sfas Emes with a responsum from Jehiel Yaakov Weinberg’s classic S’ridei Eish, demonstrating the power of bringing together classic themes in Modern Orthodoxy, and the importance of bridge-building.

The installation was preceded by a symposium on “Training New Rabbis for a New Generation.” Discussants included Rabbi B. Elka Abrahamson, president of the Wexner Foundation; Dr Arnold Eisen, chancellor of the Jewish Theological Seminary; Rabbi David Ellenson, president of the Hebrew Union College-Jewish Institute of Religion; Rabbi Arthur Green, rector of the Hebrew College; and Lopatin.

It was Steven Bayme who, from the audience, best summed up the event. To Bayme, National Director for Contemporary Jewish Life at the American Jewish Committee, “The event demonstrated the power of an Orthodoxy that is truly modern, in the sense of synthesizing modern scholarship and culture with Judaic tradition and learning, and an ‘Open Orthodoxy,’ open to all Jews and open to hearing other viewpoints. It is a beautiful reflection of what can be accomplished when Jews, notwithstanding profound theological and halakhic differences, can work together in the spirit of Klal Yisrael for the betterment of the Jewish people”

What does the Lopatin installation presage for Orthodoxy, and by extension for American Jewish religion and religious groups and movements?

Given the data of the recent Pew study on American Jews, with its findings of increased polarization within the religious communities and continued vibrance of Orthodoxy, my sense is that as Modern Orthodoxy goes, so goes the future of intra-communal Jewish relations.

As Bayme put it, “The future of intra-Jewish relations depends in large measure on a vitality within Modern Orthodoxy, and its ability to construct bridges with the rest of the Jewish world. The Lopatin installation symbolized a vibrant segment of Modern Orthodoxy consolidating its leadership, a leadership that is capable of building those bridges.”

Jerome Chanes is a fellow at the Center for Jewish Studies at the CUNY Graduate Center, and is the author of four books on Jewish history, public-affairs, and communal issues.